The Sims 4 team had the chance to take some time out of their busy schedule to show us The Sims 4 City Living festival gameplay and more via livestream today. The broadcast had a 30-minute delay due to rather frustration DDOS attacks hitting many major sites. Fortunately, it didn’t seem to detract from the quality stream that ran for just over an hour.

SimGuruGrant and SimGuruRomeo started the stream with a clear directive: showing off the Spice Festival and GeekCon. Of course, keeping a livestream on schedule always seems to be a difficult task. Here’s more about what we saw.

You can learn when a festival is about to take place by checking out the dynamic signs around the San Myshuno streets. Or, if your Sims live in an apartment building, you can interact with the bulletin board in the hallway. These interactions will bring up a dialogue box of which festival is taking place next with a time and types of activities to look forward to. There will be 2-3 festivals per Sims week but which ones are chosen at random. 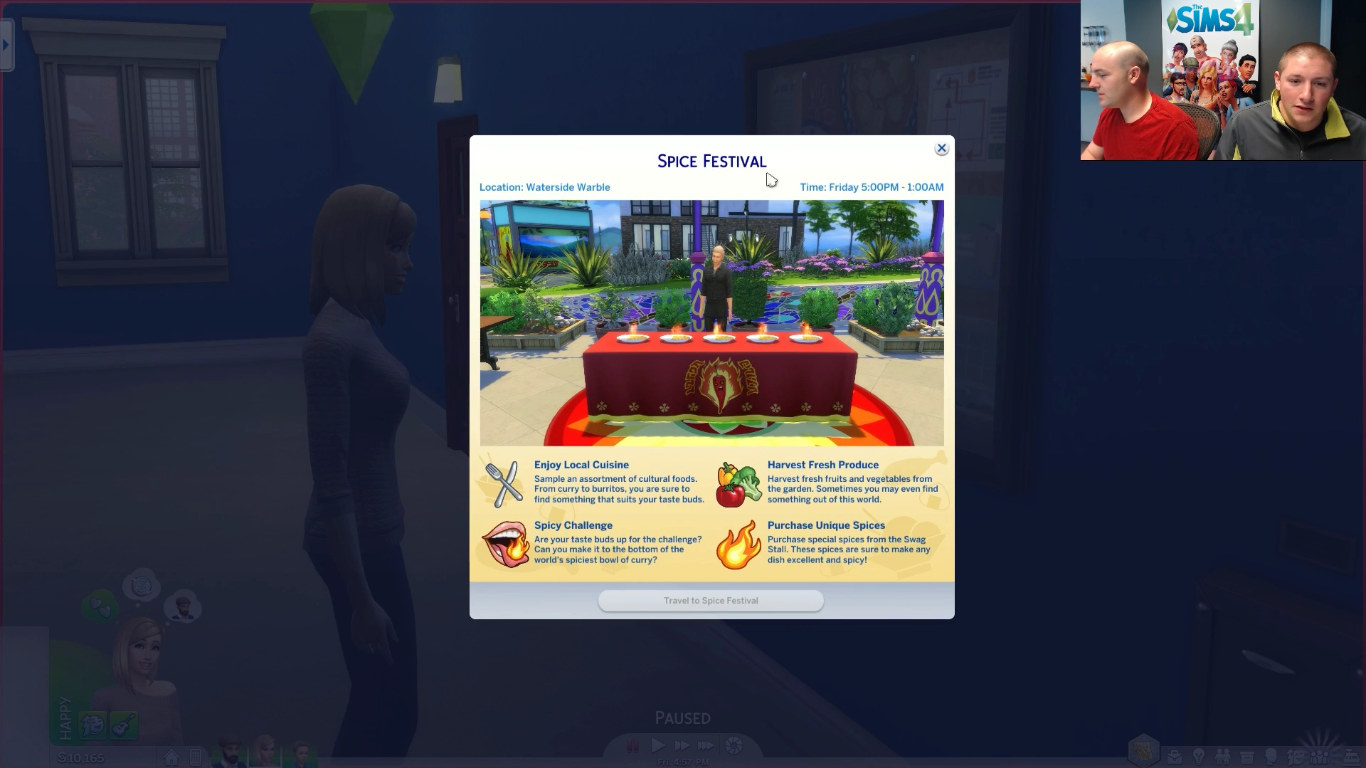 Getting Spicy at the Spice Festival

The spices bought from the Swag Vendor will let your Sims customize their food just a little more. Adding saffron, chili, curry spices, etc. to your food to change the moodlet buffs that your Sims get.

The bubble blower is also conveniently located at the Spice Festival. That way, if your Sim gets a bit of a hot mouth from the Spice Challenge, they can go over to the object to chill with the Snow Flurry favor. 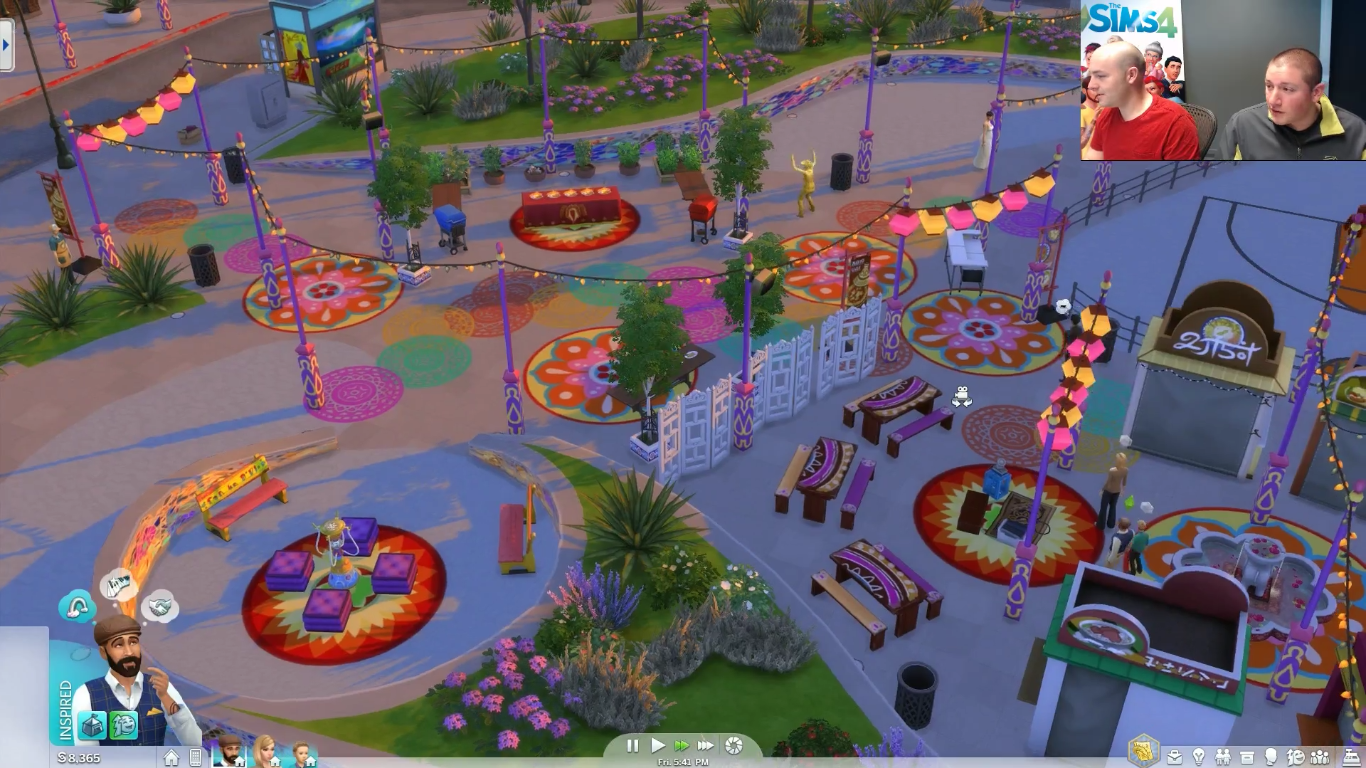 The GeekCon festival takes place in the Planet Honey Pop lot neighborhood. Just outside everyone’s favorite karaoke bar, gamers and space nerds alike will get to have their fill of the latest tech and test their skills. Programming savvy will be able to take part in the Hackathon to compete for prizes such as a brand new computer. Likewise, gamers can aim for the high score in their tournament. Seems like the team enjoys making fun of their Future Cube since that seemed to be one of the lower tier prizes. Thankfully, it’s easy to notice when the contests are going to take place since the computers and 3D gaming rig will glow with a yellow-orange border.

That’s not all for the geeky event. A pre-built rocketship is available to explore space or even to join the 50-mile high club by WooHooing among the stars. Or just work on building one to increase your Sims’ skills since the festival boosts skill gain while it’s active. 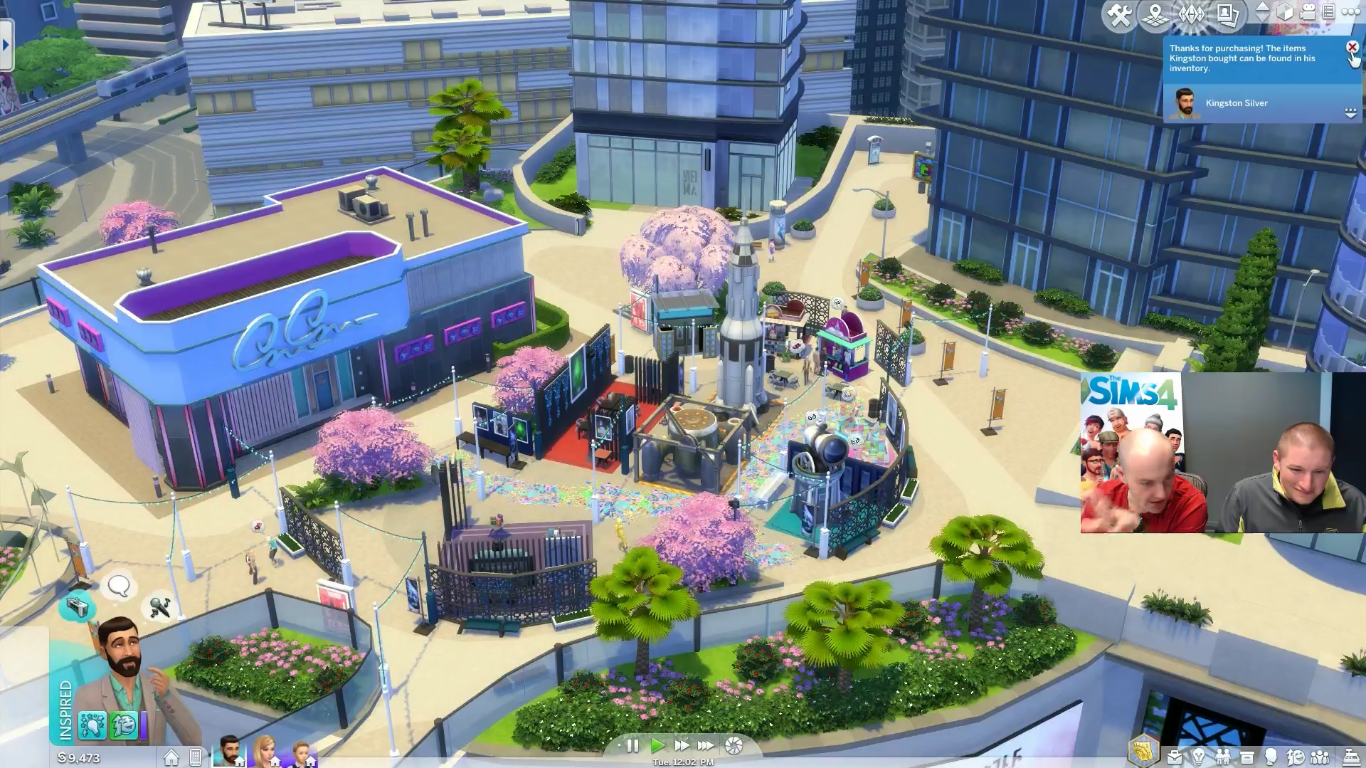 According to the gurus, the Earthquake lot trait will cause the screen to shake when there is an earthquake. On a scale of 1-10, a variety of shakes will give your Sims different moodlets. But the earthquakes won’t break objects on your lot. That is reserved for the Gremlins lot trait. Penny Pixies was also explained a little more that your Sims household will find Simoleons randomly such as in the couch, under chairs, etc. It wasn’t confirmed if this was an animation or just a fictional excuse for a trickle of income.

Every festival has a Swag vendor that you can get new spices, fireworks, bubbles, snowglobes, and etc. from.

The Bubble Blower can be placed in build/buy but will spawn with the Spice Festival. It has 8 flavors that will give your Sim a different experience with each one. Since kids can’t use the adult bubble blower, they are also able to purchase small colorful bubbles from the Swag vendor.

The fireworks are rigged together so that when your Sim places more than one down, they will be able to light just one. That will start a chain reaction to light all the others in quick succession making your displays brighter. Just be careful, lighting them can start a fire. Not only that, but it is guaranteed to set your lot ablaze if you set fireworks off indoors.

Different colored sparklers can be purchased from the vendor. Adults can also give a lit sparkler to children Sims. 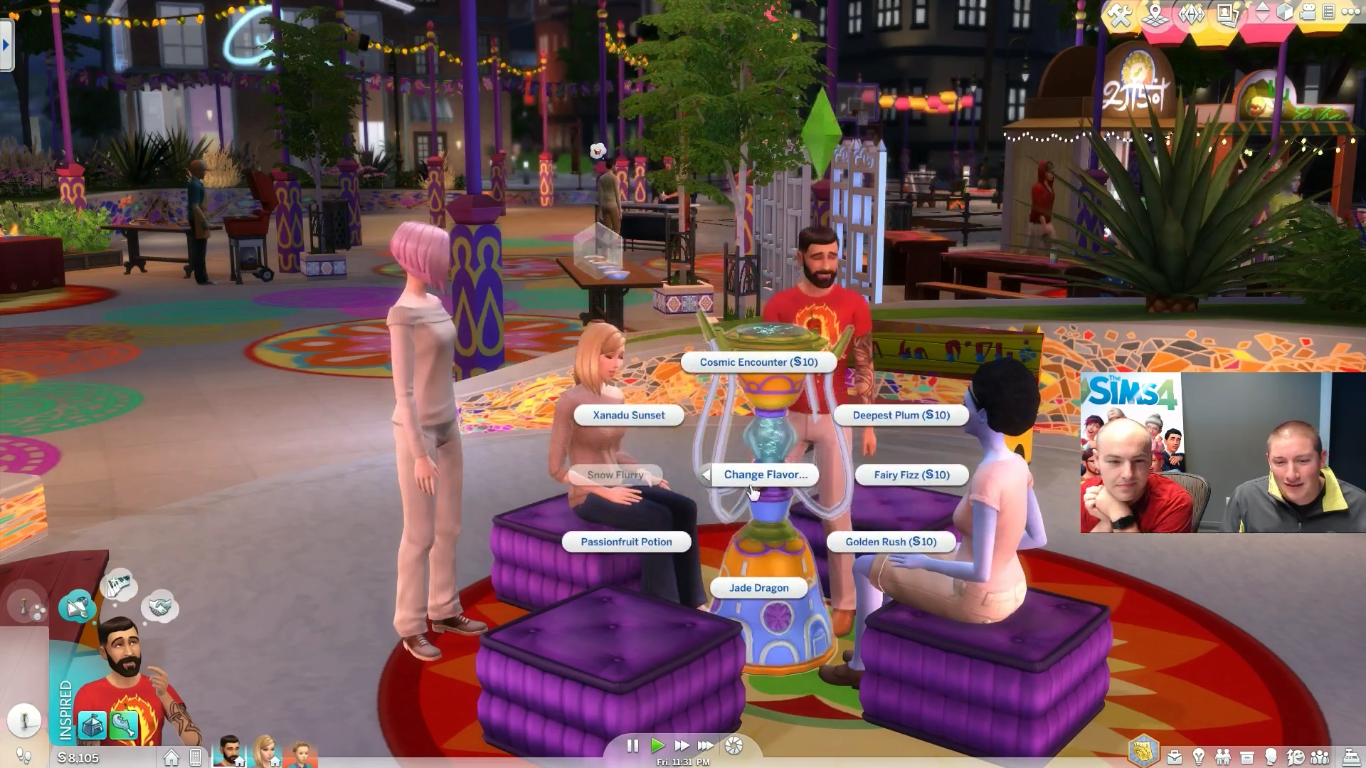 We got a sneak peak at the City Native Aspiration during the livestream. Although the gurus weren’t sure about it, they said that the final bonus trait was likely one that makes you happy while you’re in the city. Here are the Aspiration goals:

Other tidbits from the livestream includes:

Also, just for fun, here’s the splash screen for The Sims 4 City Living! 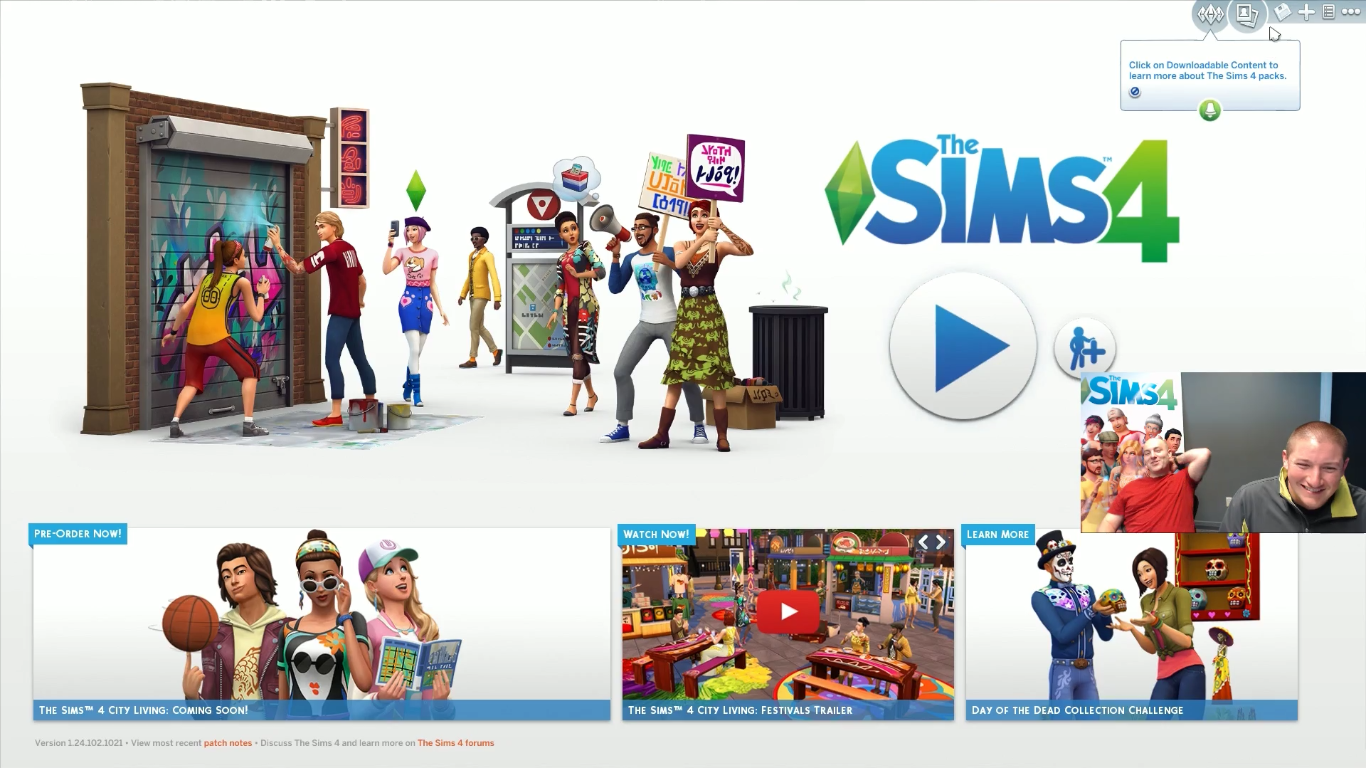 There might be more that we missed, so be sure to check out the replay when you can. Only 11 more days (13 for UK Simmers) until we can play with Festivals ourselves. Let us know your thoughts and what you’re most excited about in the comments below.