EA Germany has released guidelines that aim to make influencer campaigns transparent for their followers. In a new blog released today, EA outlines the guidelines and transparency measures taking place to ensure that players are able to differentiate between independent influencers, and those who advertise directly for Electronic Arts.

The new “Influencer Labeling System” allows players know which content is Sponsored and Supported by EA, and which content is pure advertisement. EA reiterates that this falls in line with their “Players First” motto, and follows the reorganization of several EA influencer programs that focuses on YouTubers, Twitch Streamers, and Instagram.

MORE TRANSPARENCY IN INFLUENCER CAMPAIGNS
Partners, who are supported by Electronic Arts in social media / inflation campaigns, should clearly define this.

Influencer marketing has become an integral part of communications campaigns in recent years, especially in gaming and, of course, for EA as well. These include Let’s Plays on YouTube, Livestreams on Twitch.tv, or Stories on Instagram.

The same rules apply here as elsewhere in advertising: gamers and viewers must be able to see whether they are independent and editorial content, supported placements of messages or advertising. A large proportion of the influencers and networks already work very professionally with their own identifications and thus creates transparency for the user. However, this is not yet the case, and there are sometimes different interpretations.

Electronic Arts is now launching its own labeling system for campaigns and content creation in the social media. Any YouTuber, Streamer or otherwise active Influencer, who enters into a collaboration with Electronic Arts in their content creation and does not yet use their own labeling system, is now requested to use our Hashtags and Watermarks. To this end, we will now use two transparent markings:

#supportedbyEA – Covers all Content that EA has supported the creation or realization of, for example, invitations to EA events and shows and possibly the acquisition of travel expenses. However, for all content marked with #supportedbyEA, the viewer can be assured that EA has not made any editorial influence on the design of the content or made any specifications for the implementation. The content is independent, but the creation was supported by EA. 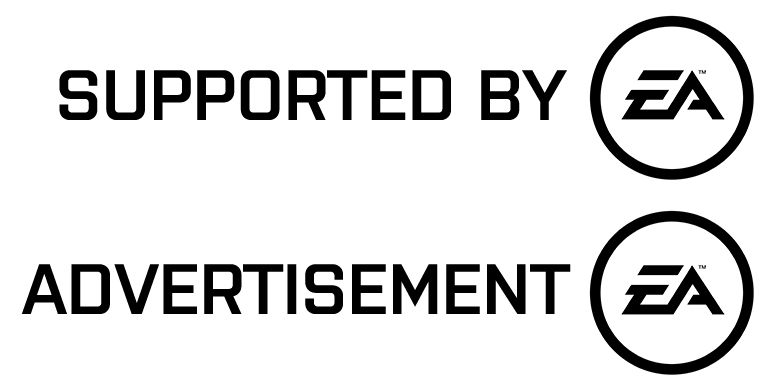 For text and image content such as Twitter, Instagram and Facebook, you will always find these hashtags directly in the respective post office. In the case of video and stream contributions, the marking is either indicated as a watermark at the beginning of the video, or the cooperation with EA from the influencer itself is explicitly mentioned verbally at the beginning of the video.

Why do we want to insist on this transparency? All the activities of EA are under the motto “Players First”, which means that we take the concerns and concerns of players and fans seriously at all times and react to them. We want to create transparency with the markings and help to ensure that supported content and advertising are immediately identifiable as such.