Revamping Your Parks with The Sims 4 Toddler Stuff | SimsVIP 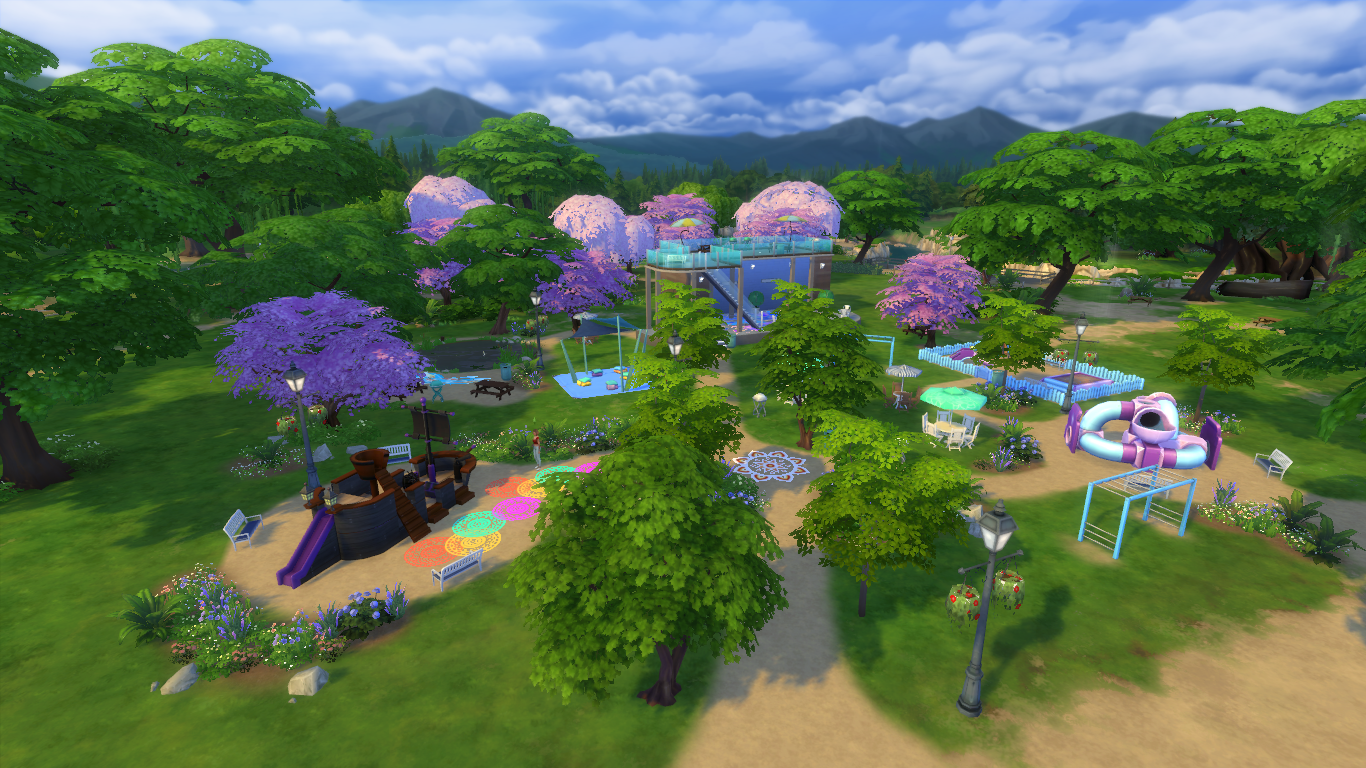 With the release of The Sims 4 Toddler Stuff, players have finally been able to get their hands-on Toddler play equipment for parks and outdoor spaces. No longer are your tiny tots resigned to the side-lines whilst their big brothers and sisters get to enjoy all the fun! There’s only one problem: none of the games’ premade parks are Toddler friendly. To give you some inspiration to take forward into your own game, I’ve renovated Magnolia Blossom, the Willow Creek park, and made it suitable for Sims of all ages! 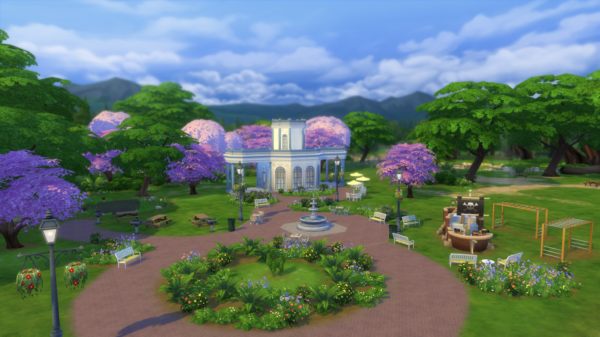 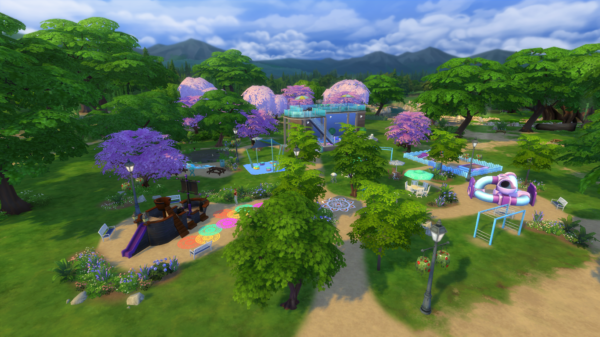 The style of this renovation was led by the new objects from Toddler Stuff. I knew they had to be included and so the rest of the build would have to work around these items. Unfortunately, the new play equipment only comes with three swatches so I didn’t have much choice as to what colour scheme to go with. Purple seemed to match best with the colours available for the children’s play equipment, as well as being the brightest option, so I decided to go with that! 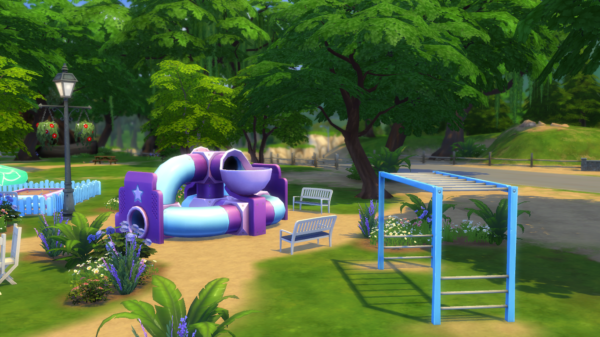 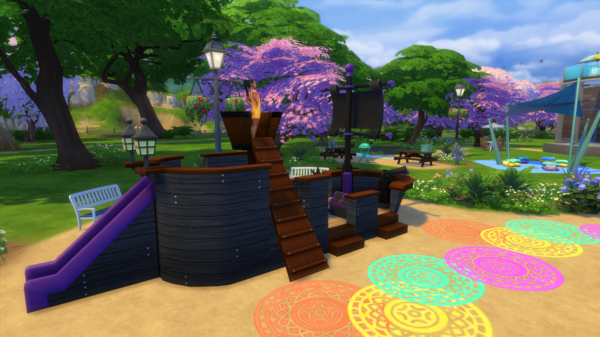 I knew I wanted to include all of the new play equipment if possible. I played around with positioning the items in different places for a while, with little success. Eventually, I came up with the idea of creating a Toddler’s only space. I used the new fence and blocked off a small area from the rest of the park. This stopped the Toddler sized slide and ball pit from getting lost amongst the giant trees and open spaces of Magnolia Blossom. As the jungle gym was big enough to not look out of place, I decided to let it stand alone. 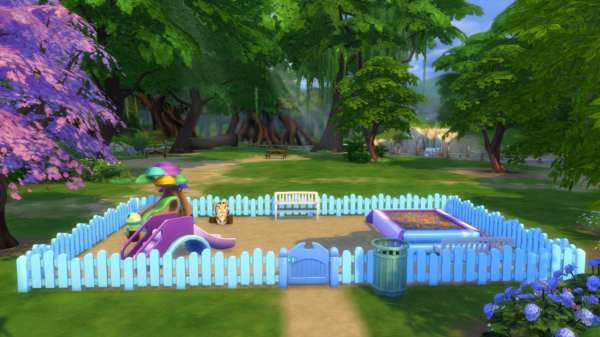 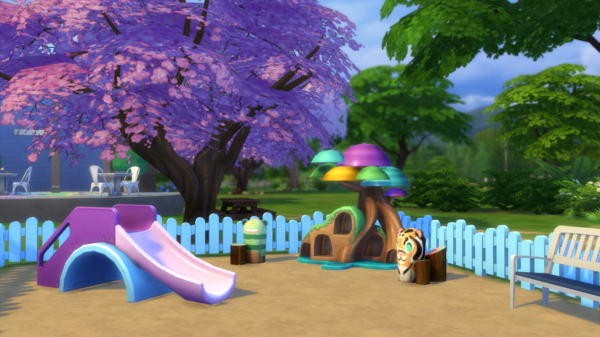 It definitely would have been possible to simply place the new equipment next to the old and call it a day, but, as I wanted the park to feel like one coherent space, a few more changes would have to be made. The Toddler Stuff items look a little more contemporary than Magnolia Blossom’s original architecture so I decided to try and update the rest of the space in line with that theme. I used the original structure that was in the park and merely played around with the shape until it was looking a little less Victorian. I deleted the octagonal room from the roof and turned the space into a seating area, adding a rounded fence to give it a modern feel. In terms of the colours, I decided to go with a wooden wall covering from Get Together. This fit well with the wooden picnic benches and pirate ship whilst still looking contemporary enough to match the shiny purple plastic of the Toddler play equipment. As I was going for a bright theme, I added a blue wooden siding to the inside of the structure. 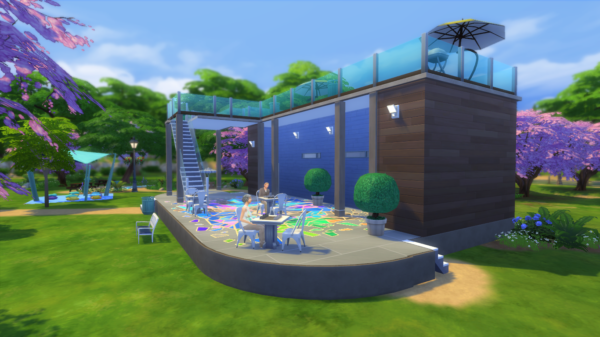 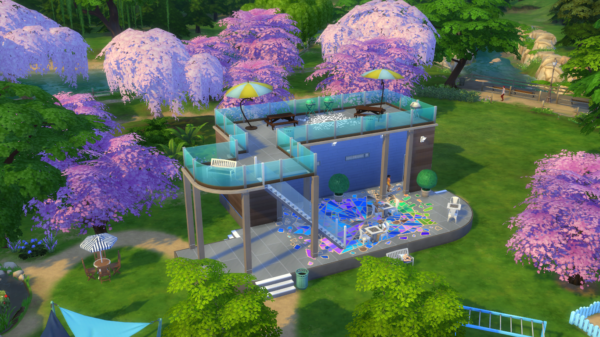 One of the things I wanted to achieve with this renovation is insuring the park continued to match its surroundings. Willow Creek has a specific aesthetic and although it can sometimes be tempting to choose the items and decorations you like best, it’s important to make sure your renovation doesn’t look out of place. This is even more important when revamping a park, only a small section of the Magnolia Blossom lot is available to edit so the new space had to flow neatly into the greater area. To achieve this, I made sure to use the same picnic benches as can be found in the rest of the park and the same style of bench that was in the previous version of Magnolia Blossom (I simply changed the colour from yellow to blue). This gave the renovation a sense of continuity and helped to make it feel like it was the same space. 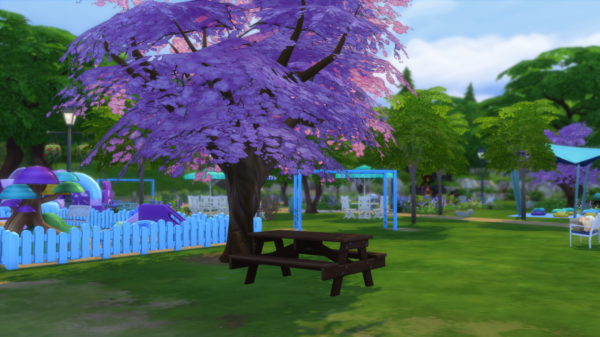 Continuity was also achieved by keeping all of the trees (and the pond) in exactly the same place. Rather than bulldozing the entire lot, I kept certain features in their original position. In the real world, it wouldn’t make sense to knock down a huge, well-established tree, or drain a whole pond and so this felt like the right thing to do. In addition, I made sure that any new trees I chose to add were smaller and looked as if they could’ve just been planted. 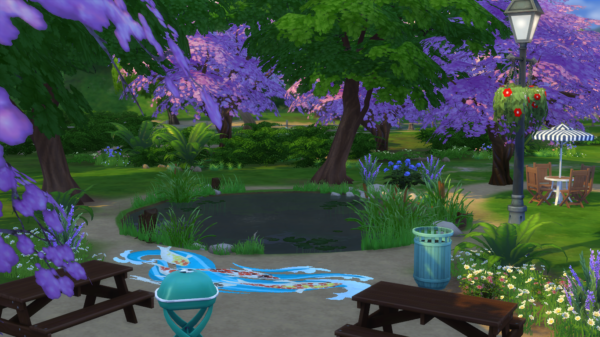 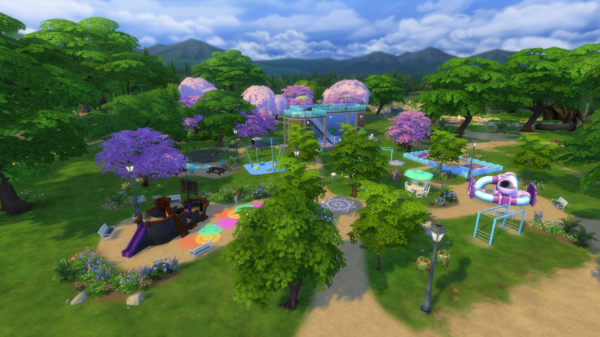 Similarly, I used the same plants and shrubbery from the previous park. Not only do these match their surroundings well but the mix of bright colours inspired me to be bolder with my colour choices for the rest of the park. I used bright coloured umbrellas and monkey bars to really make the space feel a lot more fun! Although I used content from DLC in this park, all of the plants and trees are from the base game. As Willow Creek came with the base game, I felt that including plants from packs like Outdoor Retreat or Romantic Garden Stuff would look mismatched, especially seeing as these can’t be found in the rest of the world. 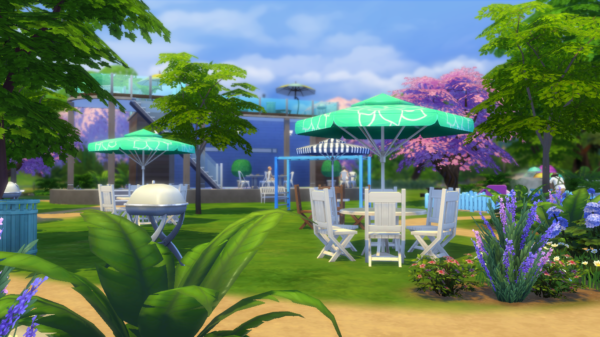 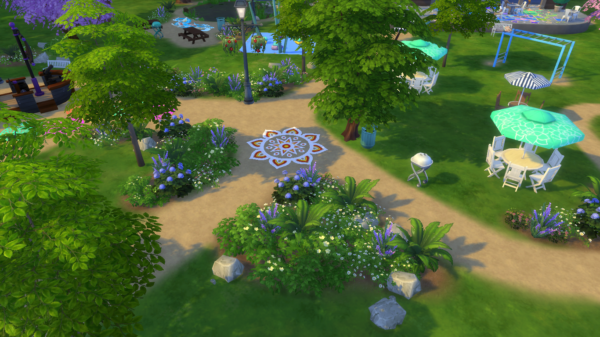 I initially planned to concentrate on the play equipment from the Sims 4 Toddler Stuff but after falling in love with the new canopy I knew I had to use it. Adding it in, and placing some tarpaulin and cushions (also from Toddler Stuff) underneath it, gave the space a festival vibe. I really liked how this looked so I decided to run with the theme. I added in some of the chalk designs from City Living, as well as a mosaic to the floor of my building, and was thrilled with the end result. This is a great example of how different objects can inspire new ideas and make your builds look better and better! 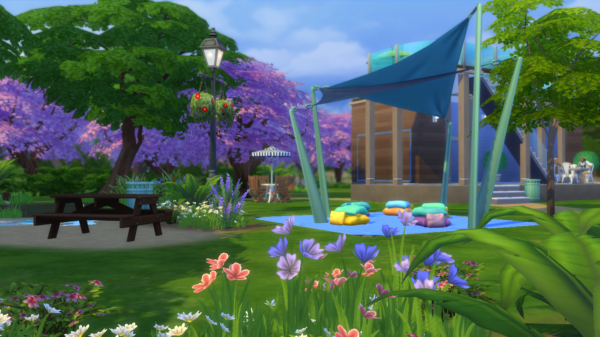 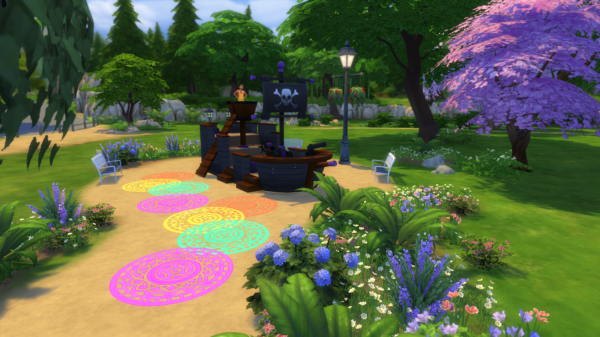 The Sims 4 Toddler Stuff provides a great excuse for you to revamp some of the parks and outdoor spaces. Renovating a lot can be a really easy and non-time-consuming way to get creating and build up your confidence. Try out ideas, play around with styles and see if you can’t inject some new life into Willow Creek!