Build With Me: Haunted House | SimsVIP

Home Guides and Tutorials Build With Me: Haunted House 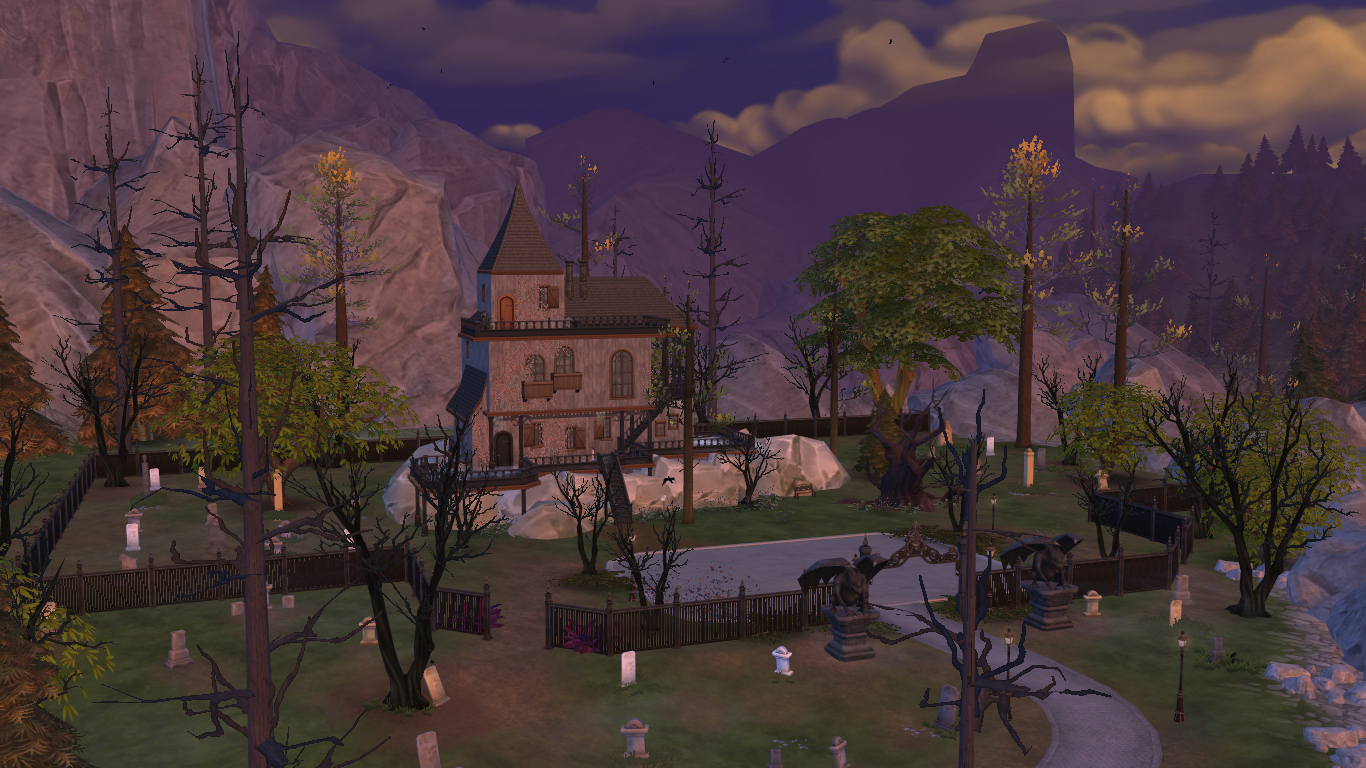 It’s Halloween! Time to track down that old pumpkin carving station, find the candy, and get your Sims ready for the 31st!

In celebration of this terrifying holiday, I have created a haunted house in the Sims 4. Full of creepy cobwebs and things that go bump in the night, this house is perfect for your brave explorers, ghost hunters, and supernatural enthusiasts! 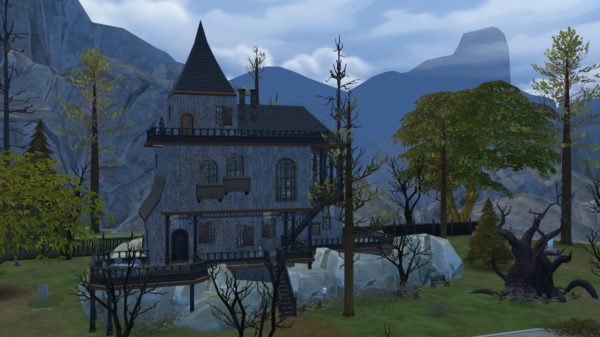 If you’re going to be creating a creepy haunted house, I highly recommend building in Forgotten Hollow. Its dark skies, abandoned graves and vampire inhabitants provide the perfect backdrop for a chilling build. I chose the biggest lot in the world (where Vladilaus’ house is normally found) meaning I was left with plenty of room to experiment with. The area that surrounds this particular lot is also really atmospheric. The gravestones, intimating gates and decaying shrubbery really added to the overall ambience and made for some spine-tingling screenshots! 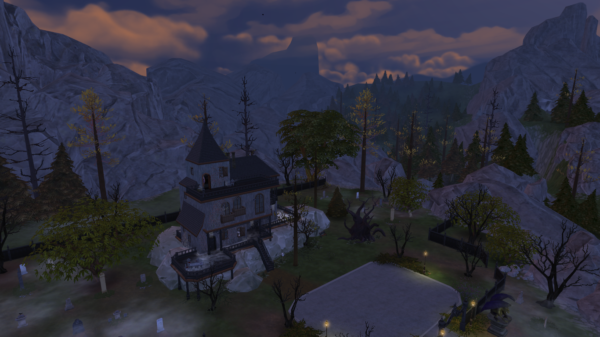 Although I knew that I wanted this house to look decrepit, abandoned, and somewhat quirky, I wasn’t initially sure how to achieve this. After playing around with a few concepts, I decided that building the house on top of an outcropping of rocks fit well with my theme and looked the best. To accomplish this look, I started with a very basic shape, simply building two rectangular rooms and positioning them next to each other on the lot. These would form the base for my rock formation. After this, I began to size up a number of the small garden rocks that come with the base game. I selected the rock I wanted to scale up and pressed the Right Square Bracket Key a few times until it was big enough. I repeated this process with each rock and positioned them individually until they completely concealed my original building. If you’re going to try this in your own game, make sure that the rocks are never taller than your basic structure. As the flat roof of the original building will eventually become the floor of your house, the rocks need to be the right height in order to avoid clipping.

Once I had completed my rock formation I began building as normal. One thing to keep in mind when building this kind of structure is that you’ll need to give your Sims some form of access. It should be simple enough to add in a staircase going from ground level up to your house, but you may have to play around with placement, making sure your staircase isn’t overlapping with any of the rocks beneath it! 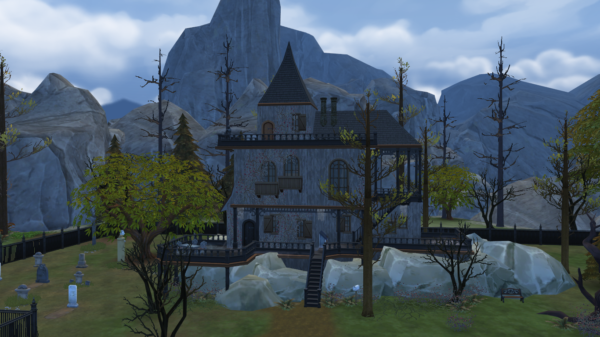 I had a lot of fun deciding on this build’s floor plan. Keeping with the dishevelled theme, I liked the idea of having overhanging rooms, balconies in strange places, and interesting shapes. Although I had a clear idea in mind, it still took a lot of trial and error to achieve the finished result. If you’re building something similar, make use of The Sims 4’s ability to drag walls and move rooms, play around with placement and try something unusual! It may take a little more time to complete than your regular, rectangular family home, but I’m sure your hard work will pay off! 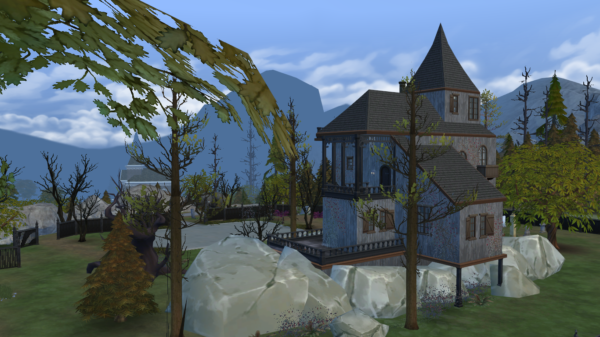 When it came to furnishing this build, The Sims 4’s ability to sort objects by pack was a lifesaver. I knew I wanted the house to look old and abandoned and, as the majority of the game’s items tend to look clean and pristine, I didn’t want to waste my time trawling through every object. Instead, I organised the catalogue by objects that came from The Sims 4 Vampires, Spooky Stuff and City Living. Although City Living isn’t an obvious choice, it actually came with plenty of broken and decrepit looking items that were perfect for this build! 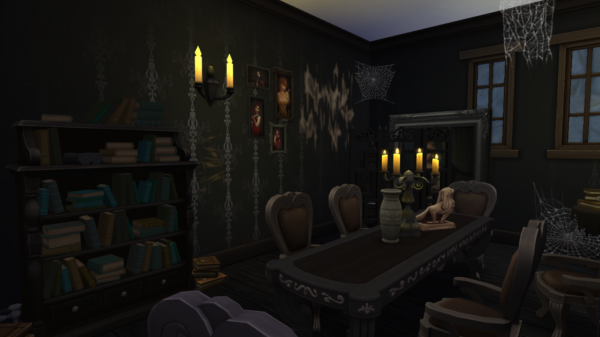 While using creepy, wrecked, and worn out items set the tone nicely for this haunted house, I found that the build really started to look like an abandoned home when I began placing objects on strange angles and piling things together in unusual combinations. The Alt Key was a great tool in this build. By holding Alt whilst you have an object selected you are able to place it completely off-grid, and at any angle. Using this tool alongside the MoveObjects cheat mean that I was able to make it look as if objects had been hastily stuffed in a corner and left to collect dust. 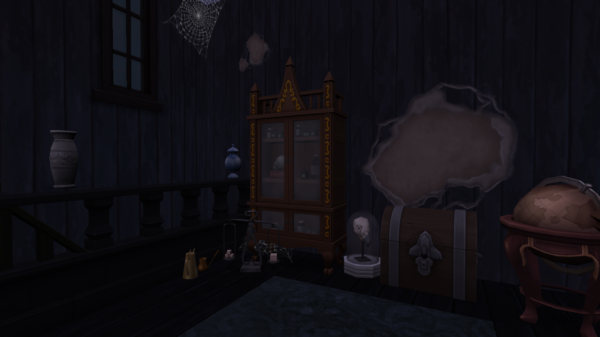 The cobwebs and wall decorations that came with The Sims 4 Vampires really solidified the style of this build. In every room in the house, (and most of the outdoor areas too!) you will find hundreds of spider webs, cracks in walls and mysteriously ripped wallpaper. As not many items in the game look truly dishevelled these décor items enabled me to add a little decay into the build. Although only a small feature, these items really do make all the difference and give the place that classic haunted house vibe! 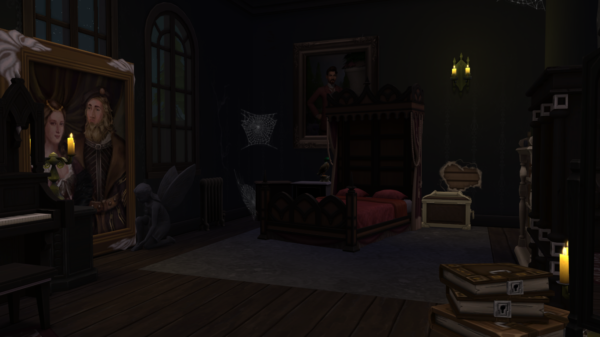 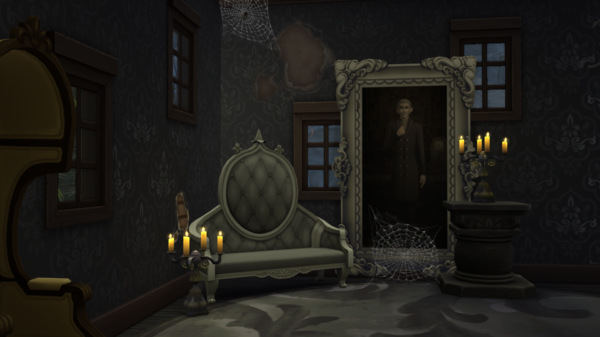 My two favourite additions to this build are the mist emitters and the asymmetric windows. These two aspects really add to the atmosphere and help my build to truly feel like a haunted house. If you have Get Together installed, I highly recommend you experiment with using the mist emitters outside of the pool. By placing a few of these grates underneath the rock formation I was able to create a layer of fog around my build. This gives the whole place a supernatural and ghostly feel, and is a really easy way to add a little character to your build! Similarly, placing windows asymmetrically is a quick and straightforward way to add some quirkiness to your houses. By placing windows at different heights on the wall you can very easily give your build an eccentric and peculiar feel, perfect for a spooky build! 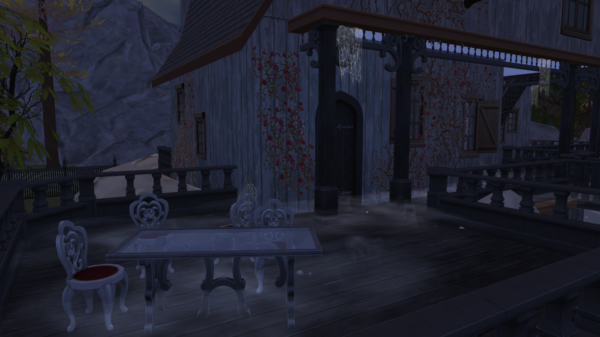 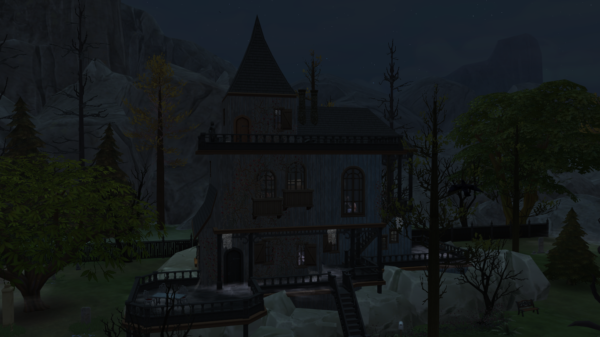 Hopefully this has given you some inspiration to build your own haunted house! Happy Halloween!

P.S. Although this house is definitely too scary for some, it does include everything a Sim needs to survive and will work perfectly as a home for someone slightly more eccentric than most!