Electronic Arts has updated the Game Changers website to reflect new and updated trust and safety policies. In an email to Game Changers recently, EA gives them a briefing on the new expectations and a link to the new policy. 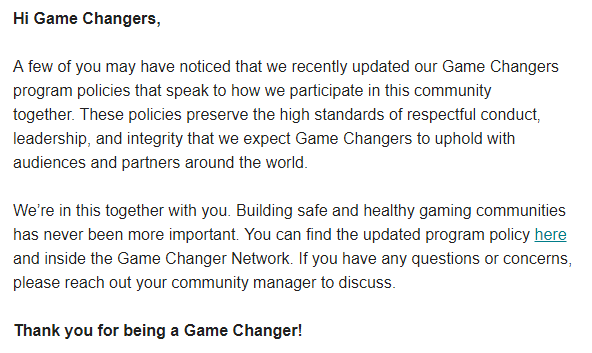 These changes come just one month after inappropriate conduct was reported about a Sims Game Changer that was harassing minors with sexually explicit advances. Their new policy highlights this and many other policies they expect game changers to follow.

The Game Changer program is a community partnership between EA and gaming influencers. We want to build and be part of healthy communities, so we look for our Game Changers to maintain a positive reputation within their communities and across the games industry. We ask our Game Changers to always be respectful, act with decency and integrity, and maintain the trust of their audiences and partners.

We understand that Game Changers have a wide range of opinions, beliefs, backgrounds, and perspectives. We fully support the free exchange of ideas and viewpoints, even when they may passionately disagree with others, or even criticize or poorly review EA games. However, we expect everyone in Game Changers to treat others with respect, fairness and civility. We won’t condone any action or behavior by a Game Changer that would significantly embarrass themselves or the community, and this includes anything that might cause harm or bring discredit to the games industry.

Key elements of our Game Changer Trust and Safety Guidelines are below. Acting against any of these could result in suspension, program removal, and banning from all EA games and services.

USER AGREEMENT AND RULES OF CONDUCT

• Harassment, bullying, inappropriate, abusive or offensive conduct, including hate speech, coercion, unwanted sexual advances or solicitation.
• Involvement in or promotion of any activity that violates the law.
• Invasion of privacy of another.
• Cheating, hacking or the promotion of such activities.

Players that are part of our Game Changer program are not allowed to partner with or promote sites or services that violate our Rules of Conduct or promote activities that are inappropriate for our communities. These would include gambling, coin selling, alcohol, e-cigarettes, and other mature content specifically noted in your agreements with EA.

Players should never use their membership or status as a Game Changer to earn favors, benefits, or influence over anyone.

Players must respect their contractual obligations to EA and to others, including non-disclosure agreements. Players must also adequately disclose advertising and endorsement deals with the public, including by following the FTC or other applicable guidelines.