❗ NOTE: The following information contains spoilers on the game. Should you not want to know of any information prior to the release of the game, DO NOT CONTINUE.

The Sims 4 Realm of Magic – Explore a supernatural world and master the art of wizardry in The Sims 4 Realm of Magic. This countryside town may look and feel like other neighborhoods, but once the secret portal is unlocked, the true magic begins. Potions, wands, and even a floating world will charm your Sim, but beware of spells gone wrong! Learn the craft of wizardry, summon a familiar for protection, and immerse yourself in this spellbinding realm. The quiet town of Glimmerbrook may have more to it than meets the eye…

Discover the Neighborhood – An unreal world awaits your Sim, and when you stumble upon the secret portal, there are mystical discoveries at every turn.

Learn the Craft – Study up on classic teachings, get experts to train your Sim. Collect and cast spells to make Sims fight, conjure food, or even turn others into objects. Create drinkable potions to make Sims fall in love, remove unwanted curses, or live forever!

Get Real Familiar – Summon a dragon, fairy, or the familiar that best suits your Sim’s personality as a personal guard and give it a creative name.

Dress for Supernatural Success – Get in the spirit of sorcery with outfits that suit your Sim. Collect wands and brooms to finish the look, then decorate rooms with enchanting objects.

The Phoenix is intimately familiar with the cycle of life, death, and rebirth. From the ashes they arise and into the ashes they fall. So has it always been.

The harbingers of prophecy and, some say, bad luck. Ravens are an ancient creature that remain steadfast alongside their favorite Spellcasters.

A classic Spellcaster companion, bats have commonly been closely associated to magic users since the times of ancients.

The Veild is a Voidcritter deep with the knowledge of countless galaxies across space and time. No one really knows the true motivation of this critter, but that didn’t stop one well known kids TV show from almost featuring the Veild as a main character.

This interesting creature is an unexpected entity that defies normal boundaries and demands a closer inspection. Its true nature is unknown.

Despite this familiar being the mysterious and silent type you may still catch yourself whispering to them, “Do that voodoo that you do!”

Be warned to avoid the direct gaze of the glowfrog. They are usually quite mischievous characters although quite harmless when left to their own devices.

Bathed in pure energy it is nigh impossible to make out the true form of a fairy beyond its magical wings. One can feel what can only be described as a slight spark when near.

Regal and powerful, this dragon should never be discounted based on its size. It is a formidable foe as well as a cherished companion.

When you need a protector that truly frightens your opponent consider the skull. It is hard not to be intimidated by this floating, haunting familiar.

The preeminent symbol of magic and ancient knowledge. They have a strong connection to the moon and stoically follow their chosen Spellcaster.

Magical Antiquarian – “But what is actually Magic?” We can spend days trying to explain this, Spellcasters would have our ears for days. But we are celebrating you! Yes – you!\n\nYou have completed this collection, and you can talk forever about potions, familiars, spells, and grilled cheese every day.

Death By Spellcaster Overload – This Sim died from over-exposure to those harmful UV rays!

Practical Magic – A Practical Spellcaster studies all things helpful and useful. Life is much easier with a bit of magic!

Mischief Magic – A Mischief Spellcaster loves nothing more than tormenting others with magical pranks. Why take everything so seriously?

Untamed Magic – An Untamed Spellcaster dedicates themselves to only the most powerful and uncontrollable spells. Magic is a force to be controlled!

Alchemy – A student of the alchemical arts studies potions, elixirs, and tonics of all kinds. Who knows what power can be brewed up by a skilled Spellcaster?

The Schools of Magic – A Spellcaster is defined by what they learn and study. What kind of Spellcaster are you?

Spell Book – A Spellcaster is nothing without their trusty Spell Book. Every incantation, ritual, and elixir that a Spellcaster has learned is recorded here.\n\nA Spellcaster can learn new spells and potion recipes from reading Magical Tomes, speaking to Sages, or by Practicing Magic. 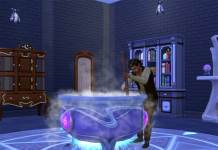