For our latest Stuff Pack we’re adding not one, but two new stereo stations to listen to while you knit! You’re not going to knit in total silence with just your thoughts eating away at you, right? Let’s drown out the voices with some new tunes!

First off is our aptly named Focus stereo station. And if you’re wondering, yes it will give you a Focused buff. Not only will it calm your earbuds, but also give your Sims a nice bonus to working on Homework and Knitting, neat huh? So if you just need to simmer down, the Focus station is here for you.

But what if you’ve had enough chilling?

What if you want something a little more LOUD?

What if you want something that will make you stand up and scream Viking expletives you never knew existed?!?!

Buddy, do we have a station for you!

Introducing the Metal stereo station, coming soon to a Stuff Pack near you!

Yes, you heard that right. The Sims 4 is getting Metal. Sims listening to Metal will feel Energized, and will gain bonuses to Knitting while they listen. Any stereo currently playing Metal will also gain some new flair for the available interactions. Check them out below: 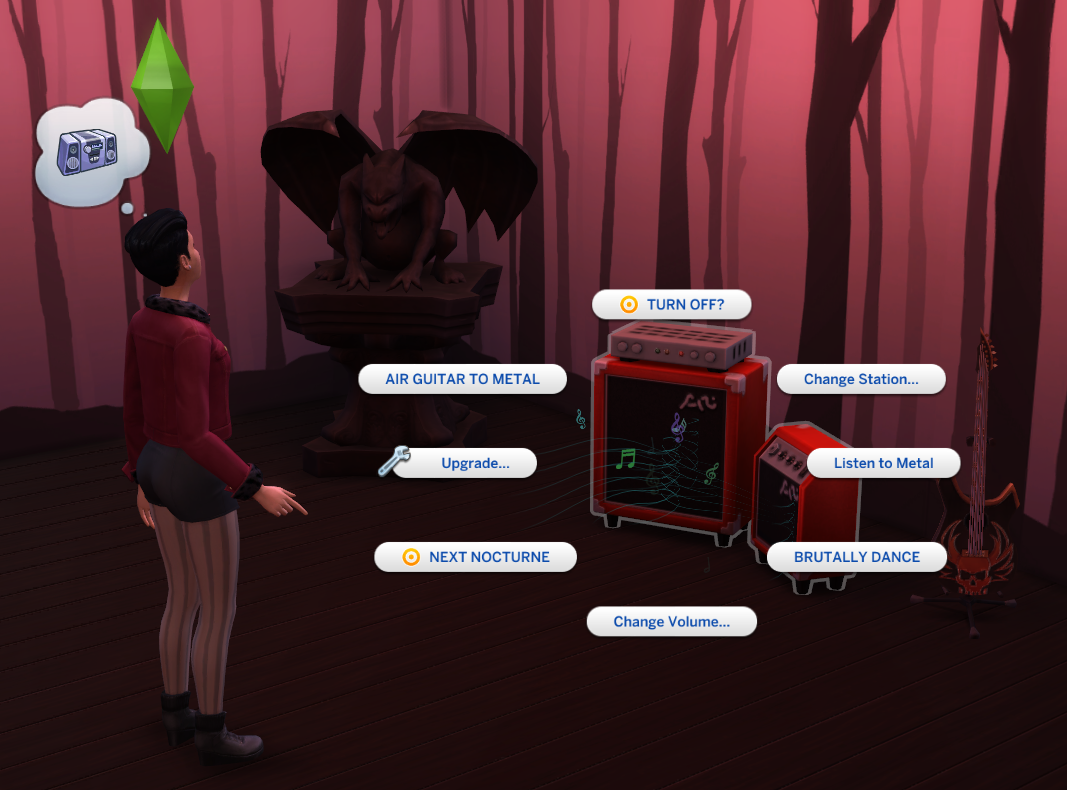 Wait, does that say AIR GUITAR TO METAL?

OH YES IT DOES.

Animations are still work-in-progress, but I had to share. Knitting and Metal, together under the same roof. They go together like llamas and bunnies, tragedy and clowns, Goths and aliens, okay, you get the picture…

Adding new music stations to the Sims is always a lot of fun, and I wanted to integrate them into the knitting experience itself. So if you want to get a boost to your knitting skill, consider turning on one of our new stations while getting crafty.
Now I’d like to introduce Drew Boles, our Audio Designer for this pack. I did a little Q&A with Drew to give you some insights into the Audio development process.

Conor: Can you tell us what it means to be an Audio designer?

Drew: There are three primary components to being an Audio designer for The Sims 4:
1) working with the other disciplines – particularly the design team – to understand the vision and limitations of a feature, so as to determine what sounds are needed;
2) recording, manipulating, synthesizing, editing, and mastering those sounds;
3) implementing them into the game and then adjusting their parameters to ensure they not only work properly within the 3D space, but also convey the overall sense of quirky fun that has come to define the franchise.

Conor: Simlish is the language of The Sims, and all the songs are sung in Simlish. Can you talk a little a bit about the process and challenges around creating Simlish lyrics?

Drew: Whenever we enlist a band or musician to re-record one of their tracks in Simlish, we provide them with a translation. This can be tricky, particularly when the vocalist is singing or rapping quickly. I always use our standard lexicon as a base – many players will recognize common Simlish words, such as “sul sul” (“hello”) and “lurve” (“love”) – and then fill in the rest with other non-specific words we have in our Simlish ‘dictionary’. When translating, I work to retain the music’s original flavor by emulating the original rhyme scheme and musical phrasing. And because singers are not used to singing in Simlish, it is very important that the Simlish be as easy to sing as possible; this often means being conscious of small things like how consonants and vowels stack up. I, myself, am a vocalist, so I always sing my translated lines along to the original recording; if something is even slightly challenging to sing, I revise it.

Things are less tricky when writing lyrics for a new piece of music. Because there is no pre-existing text to match, we simply ensure that the Simlish sings well and sounds natural to the ear.

Conor: The upcoming Metal Stereo Station is one of many stations we have in The Sims 4. What is your favorite station to listen to while playing the game?

Drew: It would be difficult to narrow it down to just one, but I do particularly enjoy the NuDisco and Island Stereo stations.

Conor: Can you tell us a bit about the stereo stations planned for our upcoming Stuff Pack?

Drew: As you already mentioned, we are adding a Metal Stereo Station. We have been wanting to do this in The Sims 4 for a while and have been on the lookout for various opportunities to do so. At first glance, a pack centered on knitting may seem like an odd choice, but when we heard about the Heavy Metal Knitting Competition last year in Finland, we knew it was, in fact, a perfect fit.
We are also including – for the first time in the history of the Sims franchise – a Focus Stereo Station. This station will feature music that has an organic feel and is pretty, repetitive, and nondescript. The sort of music you would not sit and listen to, but rather put on in the background to help you focus on something else, like studying. Or knitting.

Conor: What is your favorite feature you have ever worked on in The Sims 4?

Drew: Again, how can I narrow it down to just one?! I hope you’ll indulge me, as there are actually two features that immediately spring to mind: the Dr. June’s Weather Control Device (from the Seasons Expansion) & the Talk Radio station (from the City Living Expansion).

The Weather Control Device was particularly fun because it was an odd and complicated object with a lot of moving parts. I had to be creative not just in the materials I recorded (which included a plunger, a creaky metal ironing board, and the inner workings of an old VHS player, to name a few), but also in how I edited and implemented them, so as to bring them all together in a cohesive way.

The Talk Radio station was fun because, as a frequent NPR listener, I got to reimagine some of my favorite shows and bring them into the Sims world. I wrote the scripts, cast and directed the actors, and then edited all of the radio spots together with sound effects and music.

Hey Simmers, I’ve hoped you enjoyed this sneak peek into the features and development of our newest Stuff Pack. Just a general reminder that everything I’ve talked about here is In Progress development, so it could change between now and the final product. Please keep watching the forums as I’ll be sharing more information and insights in the weeks to come.