Hello Simmers! Welcome to a small 2-part Dev Blog about our newest Stuff Pack, Paranormal Stuff! This pack has been an absolute blast to work on, and I’m excited to share what this pack is all about! 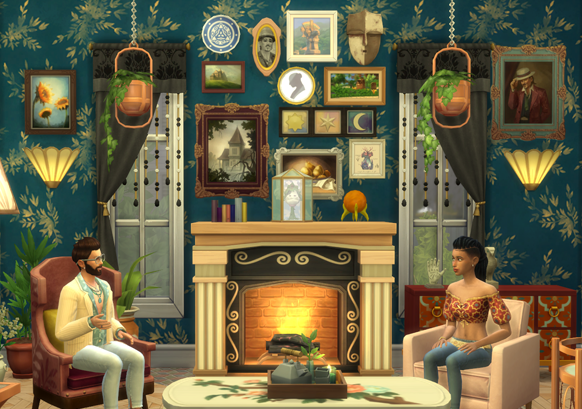 I’ll try not to reveal too many spoilers for the pack either, so I’ll keep things somewhat brief. Our topics for today are the new Scared Mood and the Haunted House Lot Type, plus an interview with our Audio Artist too!

Sims can now relish in the mortal dread of the Scared Mood! The Scared Mood affects Sims in a variety of ways, with my personal favorite, the new Scream Incoherently interaction, where a Scared Sim runs up to another Sim to scream their lungs out. This can result in the other Sim calming down the Scared Sim, or resulting in both Sims becoming Scared. This can create a Scared Mood wildfire if you’re not careful!

Sims afflicted with the Scared Mood also have trouble communicating with others, the urge to panic-run everywhere, and are slightly more prone to accidents. If no other Sims are around to help calm down a Scared Sim, they might just have to Hide Under The Covers for a while.

But if being Scared just isn’t your Sims style, consider purchasing the new Brave Trait. This Satisfaction Reward Store Trait will rapidly reduce the incoming fear a Sim feels and help Sims regain their composure faster. While no Sim is totally fearless, this trait should help mitigate some of those creepy feelings.

The Scared Mood and the Brave Reward Trait are all base game features coming with the Paranormal Stuff patch on January 21st. Tons of previous Uncomfortable Buffs are now becoming Scared Buffs, such as the “Startled By Ghost” Buff or the “Thalassophobia” Buff from Island Living.

While being Scared might not be a common occurrence in your everyday Sims life, living in a Haunted House is a whole different story… 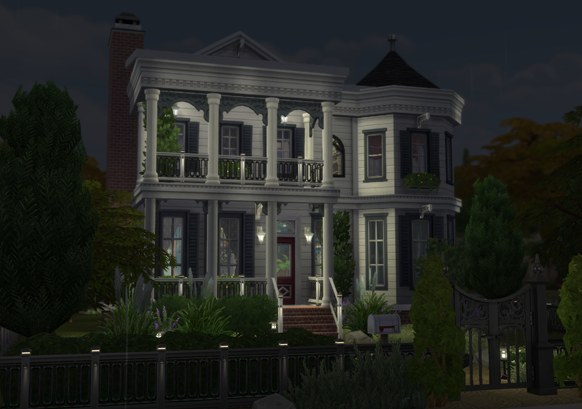 The Duplantier Dwelling, created by Doctor Ashley! This “canon” Haunted House will be available in the gallery!

They’re like regular houses, only haunted! Although unassuming during the day, at night, these places get super weird. Your Sims may notice things like flickering lights, pipes rattling, or even creepy dolls staring at them in the corner. All are totally normal occurrences in a Haunted House, but it may take some time for your Sims to adjust to their new surroundings.

Sims living in a Haunted House will also be introduced to floating apparitions known as Specters. They’re cute little critters, but their motives aren’t entirely clear. You can try talking to them, or even offer them presents in hopes of establishing a good rapport. If they like you, they’ll drop special loot for you and your family. If they don’t like you, well, you’ve been warned.

Learning to get along with your new ghostly inhabitants is crucial in a Haunted House. Things like botching seances, neglecting Specters, or letting accursed objects invade your house will have a negative impact on its spiritual serenity. There is a delicate art to co-existing with the entities of the house, and thankfully you’ll have an expert on the matter to assist you!

Claude René Duplantier Guidry was a seasoned Paranormal Investigator in his previous life, but now he exists to help anyone brave enough to live in a Haunted House! You’ll probably run into him eventually living in a Haunted House, but don’t worry, he’s a nice ghost!

Guidry will gladly offer his wisdom to those who seek it. If you’re confused, alarmed, or slightly uncomfortable by your new haunted surroundings, give Guidry a holler and he might be able to help. He can also offer valuable objects to help your Sims, too; all you need is to reach out!

All Guidry wants in return is to crash at your place for the time being. Sounds like a fair deal, right? But if you’d prefer to fly it solo, you can always disable his nightly visits—he won’t be too upset, maybe.

Living in a Haunted House adds a layer of risk and reward for your Sims, and each successful night yields Reward Store Satisfaction Points for everyone in the Household. Specters can also drop treasure that can also be collected, consumed, or sold to an Oddity Collector. So although your Sims might go through a bit of peril, they’ll thankfully be compensated.

One of my favorite pieces of haunted treasure is the new Sacred Candle. Not only do they look cool, but they also help protect Sims from paranormal influences. Place them around your house to make sure Sims are properly shielded!

Things like Sacred Candles and performing ceremonies at the Séance Table are integral to keeping your Sims happy in a Haunted House. Without using these paranormal tools, the entities of the house might get a little bossy.

And while it might be in your Sims’ best interest to keep the spirits of the house in check, watching things go horribly wrong in a Haunted House can be just as fun too. So whatever works for you!

Like Tiny Homes, this Lot Type can be toggled on or off at any time. So whether you’re a casual thrillseeker who wants to spend a couple of nights in a Haunted House, or a seasoned Paranormal Expert who wants to take on a new challenge, this Lot Type should offer something for you!

Pets get to share the fun too! They especially love the accursed objects that show up!

As mentioned before, a ton of old Buffs from multiple packs are now being converted to the Scared Mood. I think 70 something Moodlets were converted? Honestly, I lost count. Anything that seemed more appropriate for the Scared Mood was transferred over.

Oh, and you might remember an old Lot Trait from City Living called Haunted. For clarity’s sake, it needed a name change, so now it’s the Spooky Lot Trait. It also benefits from being combined with the new Haunted House Lot Type and will have an increased chance of spawning Ghosts at night. So use both for maximum haunted-ness!

Last but not least, I’d love to turn it over to our Audio Artist for this pack, Briana Billups! She did a killer job bringing Haunted Houses to life! Trust me!

Conor: Can you tell us what an Audio Artist does on The Sims 4?

Briana: Big, broad picture: an audio artist decides what everything in The Sims 4 sounds like. We record, create, and edit sounds to the art and animation of the game. Little, very detailed picture: creating the actual sounds is usually one of the smaller aspects of our job. We are meeting with other departments, like design, animation, and VFX, to understand the overall vision of new game features and how we can fit in sonically. We are meeting with each other to make sure all our new content still keeps the very fun and quirky vibe of the Sims. We come up with new tools and implementation where necessary.

Conor: What sort of things go into the creative process for creating audio?

Briana: Every audio artist/sound designer has their own creative process, but I like to make a “sonic mood board” of sorts. I typically like to have a good idea of what I want something to sound like in my head before I record or edit it, so it’s nice to have sound effects or music to refer to that represents my original inspiration or ideas. When I was in college, I would make Spotify playlists for whatever I was working on. I would listen to them once a day, adding and editing as necessary, so when I actually got to work, I was in the right headspace. Now I’m usually less formal about this sort of stuff, but for this pack, I would refer back to things like Vincent Price’s demonic laugh from Thriller or Casper the Friendly Ghost Cartoons and the looping soundtrack from the queue of a horror ride at the Santa Cruz Beach Boardwalk (Ghost Blasters)

Conor: What were you most excited to work on for this pack?

Briana: Definitely all the haunted house sounds! Good sound design is the crux of so many horror movies and video games, so even if we were keeping things more “Casper” and less “Poltergeist,” I still wanted to give a good scare here and there. I actually scared myself one day while playtesting another feature in the game!

Conor: If you had to choose, what is your favorite audio clip you’ve ever added to The Sims 4?

Briana: I would say my favorite SFX were the sports arena loops in EP08: Discover University. When you visit the arena for the soccer/esports match or graduation, you can actually listen to the whole game or ceremony. It was great to craft a whole story from start to finish using just sound. I also snuck in a lot of developer names when writing the scripts for our voice actors.

That about covers this first foray into the Paranormal Stuff Pack! This pack has been a ton of fun to work on, and watching my Sims flee in terror has been more enjoyable than I’d like to admit.

Next blog, we’ll focus on the Séance Table and developing your Medium skill, as well as the new active freelance career Paranormal Investigator.

Big thanks to the Stuff Pack team for helping this pack come to life, and thank you, Doctor Ashley, for building our featured Haunted House! 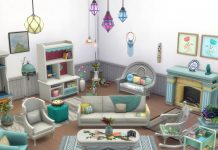 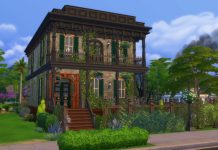