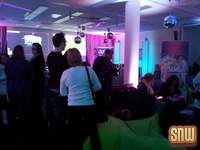 On February 8, 2012 we were invited at Electronic Arts in Germany to see the upcoming expansion pack The Sims 3 Showtime! First we got a Sims demo by Mike Cox. After the demo we could go play. As always, there were more people than computers. When I turned around, all the computers were already taken. So I chose to chill with other Sims fans first.

After some time I finally got a chance to play, and I pretty much used that time to see what was new in the pack. In between playing, I got the chance to ask some of your questions to Mike Cox. Go read and enjoy our preview!