The last poll was up prior to Showtime’s release, asking players if they would be using Simport. All the responses received a fairly close number of votes, but NO! won with 1,134 votes! Has your vote changed since Showtime’s release? 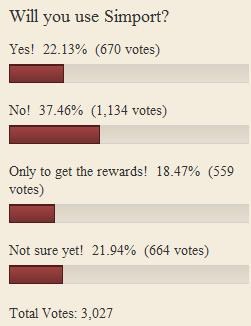 A new poll is up, and this time I want your opinion on this collaboration contract between EA & Katy Perry. Would you rather them use their resources and Katy Perry’s “creativity” in the Sims 3 Store, or continue to create Collector Edition Games? (that includes the price tag!)