*Update* –  SimGuruBritt has confirmed that the Green Ghost in Supernatural is indeed a death by witches, however it is not caused by poison. Curses or spells is my guess? Also, I will be updating the Fact Sheet with a bunch of tid bits later on, so keep an eye out on it! 🙂

Thanks for the info Roman! 🙂

Haha, good guesses! I can tell you that this death is caused by witches… but it’s not poison. Any other guesses?

I’m sure you’ve all seen the many photos released today, but have you seen this super special pic?

The Sims 3 Supernatural trailer has revealed a brand new Green ghost color. Could it be a new death type? Or simply the effects of drinking one of the new potions? Only time will tell! 🙂 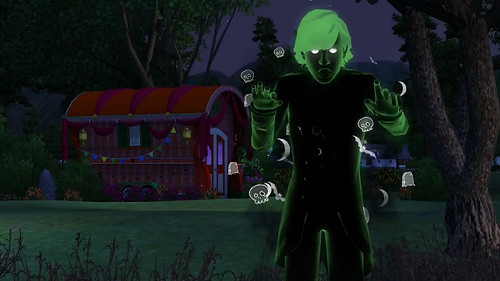