The official Sims 3 Dutch & German Facebook Pages have tossed out some (possible) hints at Seasons. On July 20th, the Sims 3 Dutch page posted a photo with the caption: “After the Rain…”, and today the Sims 3 German page created a poll asking users: “Many of you want a weather add-on. What season your Sims like the most?”.

These could very well be nothing at all, but there is a bit more to this mystery. A few days ago, Fansites from around the world revealed they were invited to an exclusive community event at EA’s California Studio in mid August. The last time EA invited worldwide fans to their HQ’s, was for World Adventures. Seeing as the event will take place so close to Supernatural’s release, speculation has started as to what exactly fans will go home with. Could a Seasons announcement be on the horizon? (After all, we will basically know all there is to know about Supernatural by then.)

With 4 months left, there isn’t a whole lot of time to advertise Seasons after Supernatural’s release. There is no telling what awaits, but you can check out Platinum Simmers for info on this event. They are also taking questions, so make sure to submit your questions by tomorrow! SimsVIP was not invited to the event, but we will keep you updated as the information rolls through. 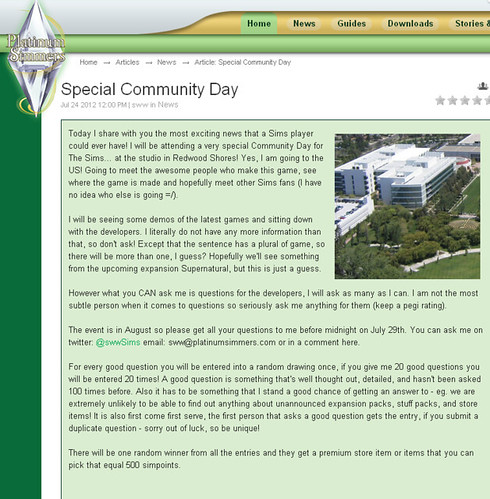