We visited Gamescom 2012 and while there, we got a special Sims 3 Seasons demo behind closed doors. I wrote a small piece on that, and I hope you are just as excited about the upcoming pack as we are! Because I personally can’t wait!

The Sims 3 Seasons is one of the most wanted expansion packs in The Sims 3 series. People have been asking for it since day one. The Sims Studio has finally given in and took us all by surprise that this pack will be released in November 2012, only a couple of months after The Sims 3 Supernatural! As you might know, there usually are 6 months between each expansion pack. 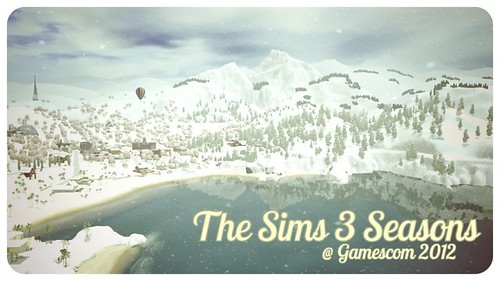 The Sims 3 Seasons brings us… seasons obviously! And seasons will completely change your Sims worlds. Obviously weather effects will be added to your game, but it will also change the things your Sims do. Your worlds will look different in each season. And seasons change gradually, rather than just having snow one day and a lush green world the next.