The Sims 3 once tried to break away from the tyranny of the “normal” world with The Sims: Medieval, only to find that setting the franchise’s signature gameplay in the Middle Ages sacrificed much of its creative freedom. The Sims 3: Supernatural takes you on a similarly wild ride, but it benefits from a decision to remain rooted in the world you’ve created for your sims over the past three years. Here, the focus is on augmenting the core experience instead of attempting to redefine it. It’s an approach that largely works despite some noteworthy flaws, and almost every new feature exudes a creative spark. There’s a stranger lurking in the neighborhood, and while he may not always be the most charming of visitors, you should still invite him into your home. 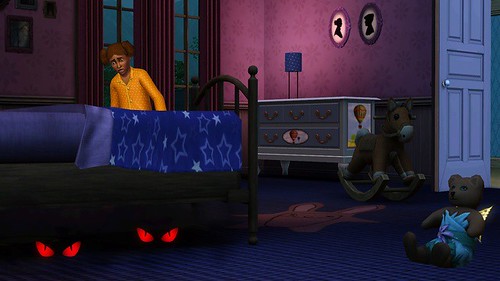 The neighborhood in question is Moonlight Falls, a bosky mountainous village where vampires and werewolves rub shoulders much as they would in an episode of True Blood. It’s not necessary to limit your experiments to the new ghouls and goblins in Moonlight Falls if you have busier households elsewhere, but the foggy meadows and varied Victorian architecture complement the ambiance of the expansion as a whole.