The entire staff here at SimsVIP would like to thank EA UK for the opportunity to attend this amazing event. I was not personally able to attend the event – since I am waaaaay out here in the USA –, but we were able to send our very own Hortensis. Special thanks to Hortensis for putting together this awesome preview! 🙂

A note from Hortensis:

My thanks go out to SimsVIP, and everyone working behind the scenes to make attending the event possible. In addition, I would particularly like to thank EA UK for hosting the event and looking after us so well. 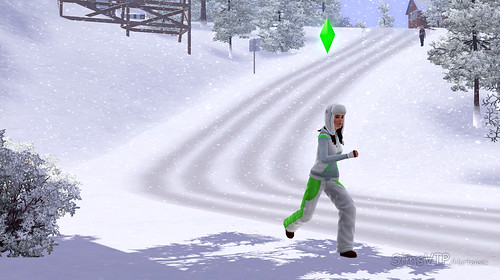 November 2nd was a beautiful, sunny, autumnal morning in the UK. It was ironic that a few short hours later, I would have my first “hands on” experience with the Sims 3 Seasons. For the first time in this third iteration of the Sims series, I would be able to replicate any weather condition the day might throw at me. On this particular day Mother Nature gave me… sun!

When the game launched, it sent me straight into Sunset Valley with winter chills. My Sims decided it was a perfect day to jump in the hot tub, and relax while the snowflakes fell gently around and about. 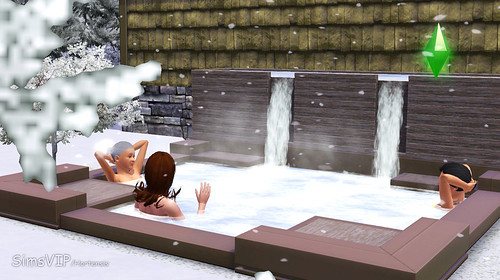 Unlike taking a dip in a swimming pool, there didn’t seem to be any detrimental affect on my Sims despite the weather conditions.

Switching to town view I immediately spotted the festival map tag and had two of my Sims head straight over to investigate. First up was a quick spin on the ice rink. My Sim wasn’t very accomplished at ice-skating, but she was able to perform the “skate together” interaction. While they swung around gently, other Sims wobbled and tumbled around her. 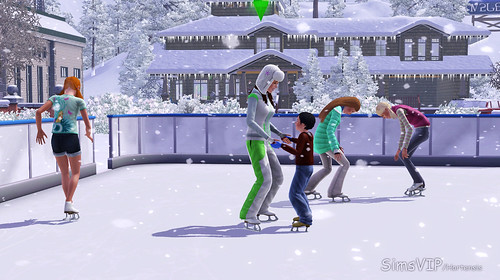 As a Sims’ skill increases through practice, more complex options become available to them. It is also possible to skate on ponds and lakes once they have frozen over.

Skating time ended and it was time to try out the half pipe! I didn’t have time to get them to a competent level, but it was very fun to watch. Finally, I had them indulge in a snowball fight, or in the case of my Sims, a water balloon fight. 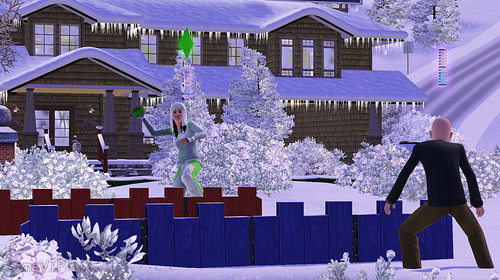 Full tummies called for something a little more gentle. My Sim headed over to the face painting kiosk, where she had the choice of: whimsical, happy clown, freezer bunny, unicorn, pirate, feline, snowflake and star face decorations. I think my Sim would have preferred a unicorn, but I insisted she asked for freezer bunny. 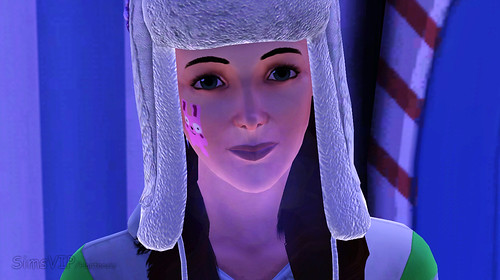 I knew there was a reason I created two loving Sims. I was on the look out for new woohoo locations! One of the newest locations for Sims to relax, daydream and nap, was also where my Sims had the option to woohoo and try for baby! The picture says it all… 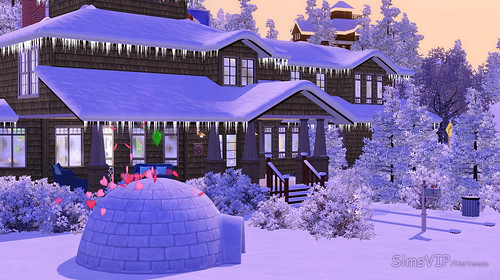 The above is one of my favourite pictures from the day and it is a perfect time to talk about just how beautiful winter is. It is obvious that the Sims team has put a tremendous amount of work into perfecting this aspect of the game. Sunset Valley in its winter form looks incredible! Everything from the icicles, the slow build up of snow on objects, the misting/icing up of windows, to the tire tracks in the streets and the light changes, all reflected the amazing experience the game offers. I cannot wait to get my game on the 16th and just sit back and take it all in.

It was time to take my Sims back home and it was there that I made my favorite new discovery. Snowmen & Snow Angels! I was pleased to learn that we had the option to create several new types of snowman. 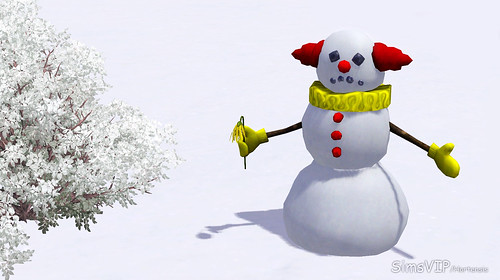 The tragic clown! Isn’t he so cool? Actually, I think my Sim was rather more smitten by her hockey player version. 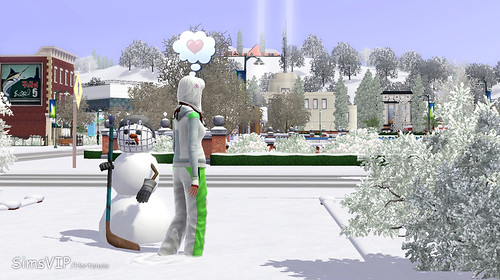 But I couldn’t resist taking a peek at the grim reaper snowman too. 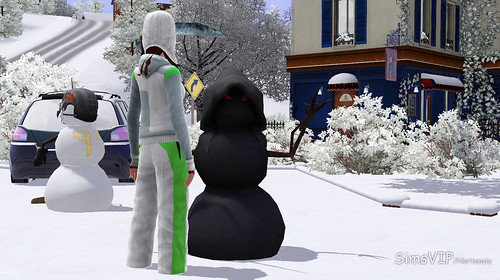 The snowman building options are: random, hockey player, grim reaper,evil, alien, tragic clown and classic. With a little more time I would have also asked my Sims to build an igloo from scratch as I would have liked see them working together. I’m really enjoying the fact that this Expansion allows our Sims to interact with each other so much more. Another fun option comes in the form of a door click! Clicking on the front door of my Sims’ home, gave me the option to select the type of external lights shown on the house, as well as the color.

Having cleared the garden a little, I now had room to place the Climatron Control Unit. This was something I definitely wanted to take a closer look at. 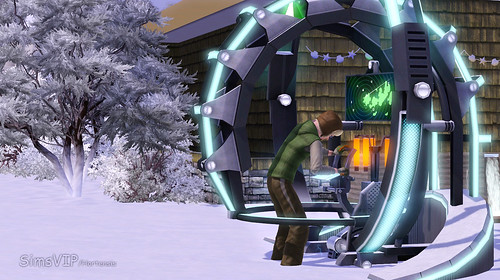 It is a Lifetime Reward that costs 40,000 points, and it allows you to change the current weather conditions. Here it is in action! 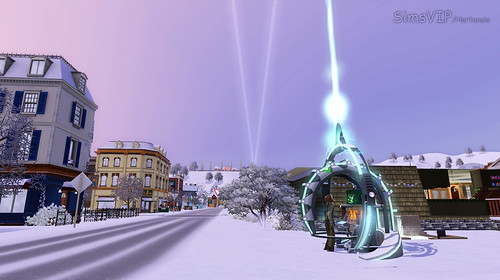 Finally, to celebrate Snowflake Day, my Sims were able to enjoy an exchange of gifts from a pile of presents in the center of the room. We were told that the thought bubbles represent the gifts the Sims have actually received, but because of time limits, I didn’t get the chance to check this out. As a gesture of appreciation, my Sims decided to sneak a kiss under the mistletoe. Ahhhh! What a lovely way to end the day 🙂

Winter has proved to be a really beautiful time of year with so much to do, but it was time to move on to the other Seasons.

I set the season length to three days in the option panel, so I was surprised to see the first day of Spring included a snow covered world. I was puzzled at first, but then I realized that the snow was actually melting! It doesn’t just suddenly disappear, but instead, patches of grass emerge and the snow slowly begins to fade. A Transition of sorts. Even with the chilly weather far gone, the Evil Snowman and Igloo were still visible!

(I was almost positive I had captured the snow in its melting state, but it’s not in my screen grabs sadly. Note to self: press C harder!) 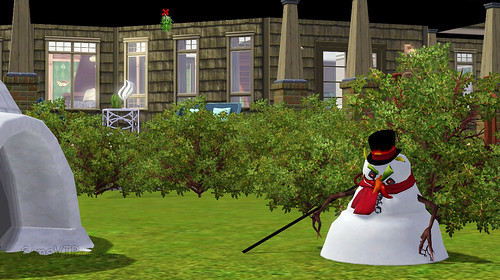 Spring time brings a whole new festival lot of fun! My sims ran about the festival ground collecting hidden eggs until they had exhausted the days supply. They then decided to watch other sims play horse shoes. 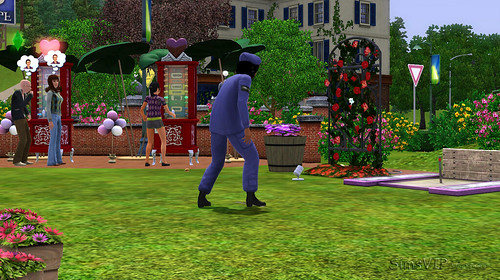 When they spotted another sim using the love test machine, they decided to have a go at it. 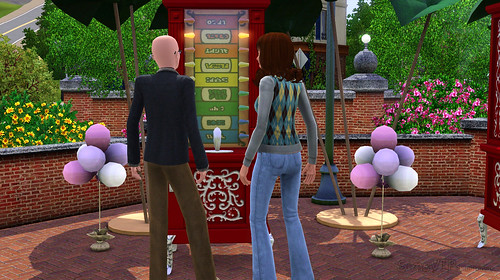 Along the way, my Sims picked some of the wild flowers that were growing about the festival grounds. One of them then got the ‘allergy haze‘ moodlet – and whilst talking of moodlets, another sim got the ‘spring fling‘ and ‘got kissed at the kissing booth‘ moodlets as well. I guess the pictures below will explain all. 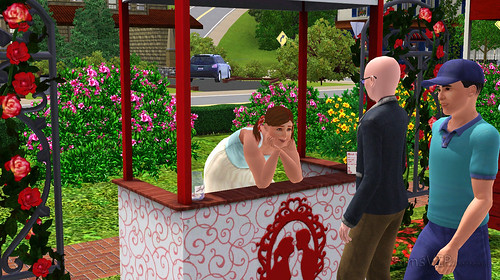 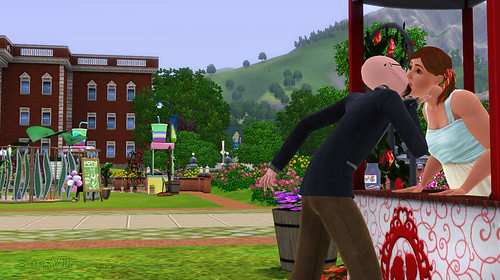 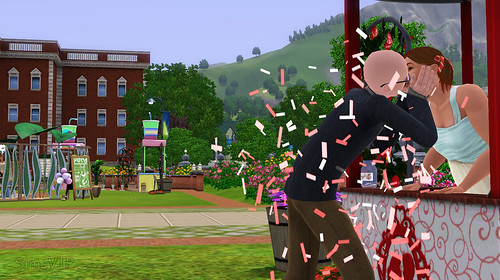 There are two kissing booth types; One for the guys and one for the gals. With all this romance in the air, it is also possible to send love letters and partake in a little on-line dating!

A visit to the food stand this time around, revealed that some food types had remained the same, while several had changed. Sims were now able to order garlic fries, marshmallow bunny, grasshopper pie, (Grasshopper Pie? Really? Reminds me of crickets!) ice-cream cones and lemonade. The variety across all four seasons is huge!

The same changes apply to the face painting booth.  Several face paint options remained the same, with hearts and plumbobs added to the mix. When taking part in various activities, your Sims will earn festival tickets that can then be redeem at the concession stands.

I only had a short time to experience Autumn, but I did manage to see the changing leaf color in all its glory. Beautiful indeed! With the little time left, I sent my Sim to the Haunted House. I guess my Sim isn’t at all cowardly since he seemed to enjoy his visit!

Another bonus in Autumn, are the leaf piles. It is also a brand new woohoo spot! 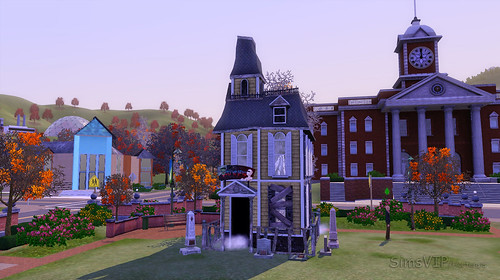 A few other things I wanted to check out was the weather channel. I think the weatherman was swimming at that point! 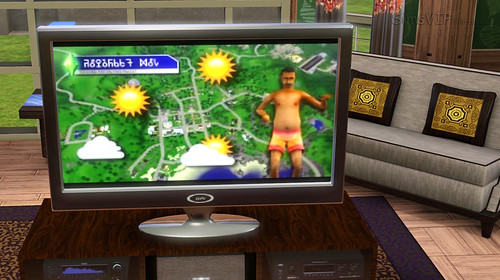 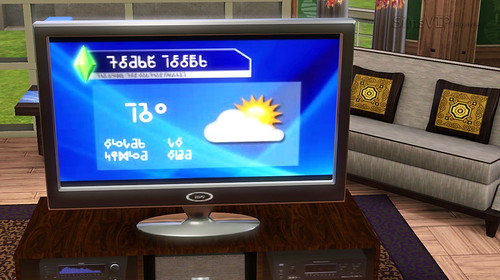 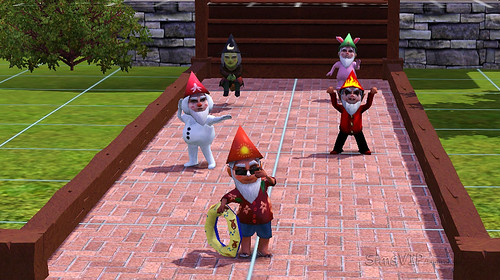 Throughout the game I noticed various thought bubbles and moodlets regarding illness and allergy. At one point I did take my Sim to the hospital and had him immunized.  I then got the message that he would be able to avoid those nasty germs next year.

I did take a peek into build/buy/debug mode, and found several new firework options with names such as little maniac, smoke bomb and ninjas choice. The Galaxa space car was also there (more on that in a moment) and I know people have been asking for new bath/shower combo’s so you will be pleased to know we are getting one of those too.

There are plenty of new objects to extend our current selections in game. I didn’t get a chance to screen grab everything, but there are a few new objects shown in the screen below. 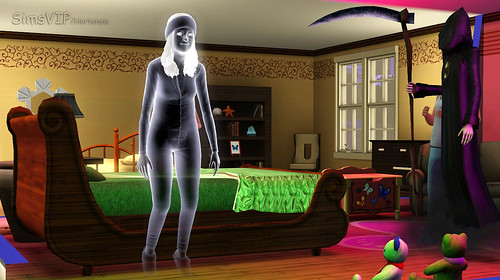 I have read in various forums that people are concerned that their Sims might just randomly be plucked out of the house/garden and abducted by aliens.  Or perhaps the male Sims will return from their adventure with an extra (small) Sim!

Armed with cheats I changed my Sims’ trait to genius, I bought him all the logic power I could muster, I had him telescope gaze the stars and search the galaxy by night.  By day he played chess, hunted for space rocks, visited the military base and the science facility and finally reached level ten in logic. Despite my best efforts, neither he or his family was abducted.

I was playing on high speed throughout most of this time and I did see the twinkling green lights in the sky indicating the alien presence and I heard their alien sounds, so they obviously knew he was interested. At one point the Glaxa space car whizzed by!

My knowledge as far as aliens goes is still pretty sketchy, but my conclusion from this limited game play is that Sims won’t be autonomously disappearing skyward every five minutes. (Or be abducted if they so much as glance at a telescope) I cannot wait to further explore these amazing creatures once the game comes out.

And with that my gameplay session was over. This Expansion feels huge! There was so much to see, so much to explore, and so little time to do it in. I really don’t feel that three days of gameplay would have been enough, never mind three hours.

I had tremendous fun trying out Seasons and can’t wait for my copy to arrive. Once again my thanks goes to EA UK for allowing us to preview the game.