Since The Sims 3 launched in 2009, Sims have vacationed in exotic lands, discovered new careers, mingled with celebrities and the supernatural, and maybe even adopted a pet or two. But. But! They’ve done it all to the backdrop of static weather. Each day had blue skies, green grass, and even temperatures. This all changes with The Sims 3: Seasons, the eighth expansion for the base game. Adding seasonal touches and weather effects brings The Sims 3 to life in a way that was sorely missing before, though the rain and snow can’t cover up this series’ existing bugs. 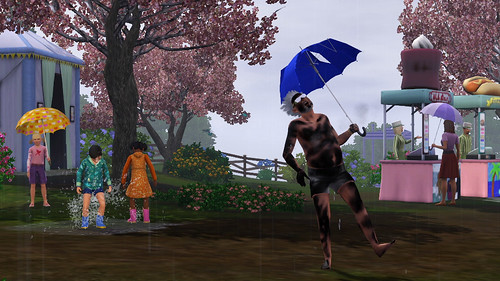 Seasons doesn’t come with a new world for Sims to inhabit, making it the second expansion after Generations to do so. However, you can buy a new town right from the menu if you’re not satisfied with the ones you already have. In-game prompts to purchase more content from The Sims 3 online store have gotten more intrusive with every expansion, and now you don’t even have to be in the game before you’re asked to buy more; it’s right on the loading screen. The ease in which players can add content to their games without having to leave it is convenient, but it’s also a little frustrating to be asked to spend more money after purchasing yet another expansion that costs almost as much as the game itself.