Here to kick off the March Community Spotlight, is Storyteller Adventfear! In an introduction below, Adventfear gives readers the inside scoop on his hit Sims comic series. If you don’t already know who he is, you will now! Take it away Nick!

Hello there to everyone there, my name is Nick but you can call me Nick! Or adventfear, that’s my username I go by. I am a Sims story writer, lot creator, and creator of a Facebook comic series called Tom and Annabelle, which is also a story as well with currently 42 chapters.

I have to say “thanks!!” to Alexis at SimsVIP who gave me this amazing opportunity to share my story and erm… stories with this amazing site.

While I try to create fantastic stories of aliens and genies and evil unicorn witches, my own life story is not much to talk about. I live in Missouri, go to a community college for now where I’m trying to learn more about writing, and I love creativity, I love being creative. I also like long walks on the bea… wait, this isn’t a da… okay.

My interest in The Sims emerged a long time ago in a town far, far away. I visited my sister’s house one day and she had the Sims, so I sat down to play that, and ended up getting TS1 for the Gamecube, then I got TS2 for the Xbox where I created these green aliens, then I picked up the complete collection of The Sims 1 for PC a few years later. When that happened I got TS2 for PC where I made green alien/human hybrid Sims, then when they released TS3 in 2009 I reaaaally wanted it, and didn’t get a chance to get it until October of 2010, where I made green alien/human hybrid Sims. For the future, I personally can’t wait for TS4… though I hope they have green skin tones.

Anyway that’s my rambling about me and my love for this game and the green skin tones. Now on to the stuff I do!

As mentioned before, I like to write stories using TS3 as a base. In October of 2010 when I first got the game, I created a group of Sims named Tom, Annabelle, Kelly, Scarlett, and John. While they’ve changed over the years, with refined personalities, the core of the Sims’ basic ideas have remained in-tact: Tom’s an adventurer who always wears brown, Kelly’s a detective who always wears blue, John’s a computer wiz who always wears black, Scarlett’s a hot-tempered lady who always wears red, and Annabelle’s a green-skinned girl who wears black and purple and has a bit of an overall “Goth” look to her.

I created little Sims 3 comics with the characters for the Sims 3 Comics Album, and those gained a bit of a following so I created a page for them to be hosted on. In September of 2011, I started writing a story called “Tom and Annabelle”, named after the two characters in the comic. The story’s currently at 42 chapters, and I’m trying to get past a terrible case of writer’s block to work on the next.

The story, summed up quickly, is about a green-skinned lady named Annabelle and her human friend Tom as well as the rest of their family, and their adventures through life while encountering a variety of different oddities and dangers.

I’m also a lot creator! I create a variety of different lots and upload them to the exchange. I thought I’d share my personal favorite lots I’ve made. 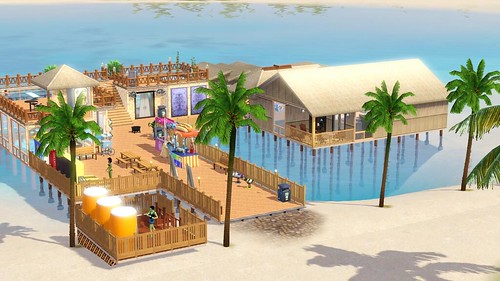 “A tourist trap for over… well not too many years because it had only been recently built… but I assure you it will be a tourist trap! Paradise Pier brings out the best for all ages! Whether you’re a toddler who goes for a ride on the spring bounces or a child playing arcade games, to a teen’s dream of a hot tub while the adults have some fun at the bar, Paradise Pier has something for you!” 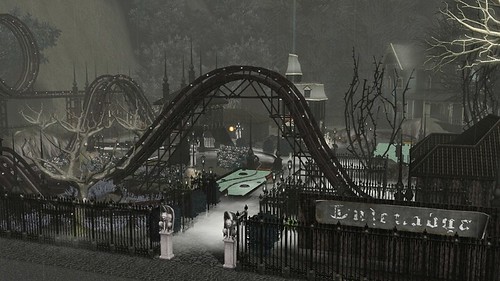 “Way back in 1945, a man had a dream to build an amazing amusement park, and he accomplished that dream in building Hill Park. He and his family lived in the park in a large house in the rear corner happily, but then everything changed when the fire broke out. Years later, the park is now reopened, under a new title to represent the sadness that fills the air: Bleak Hill Park.”


You can find more lots at my Exchange Studio:

And here’s my story:
http://tom-annabelle.blogspot.com/