SimGuruDaniel Assures Players that "Pets" Will Not Function as "Objects" | SimsVIP

With infants in The Sims 4 being “object-like” and tied to their bassinets, many players are concerned with “Pets” being introduced the same way. PurpleClauu over on Twitter expressed this concern to SimGuruDaniel, who then responded with the following: 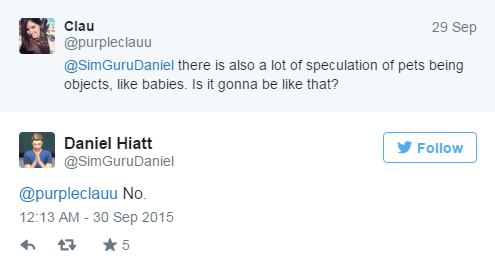 We have yet to hear anything official about a Pets Expansion in the works, but we do have some type of confirmation that pets would not be launched as “objects”.