The Sims 4 Dine Out: Twitter Tidbits by Gurus | SimsVIP

The SimGurus are having a field day with the speculation and hype over Twitter! While it’s not a full blown Q&A, they did share some interesting responses:

@smagofcl @SimGuruPizza There were a few things I was surprised people notice right away and that is one of them!

@TheSimScraper They’re added to your inventory so you can collect and decorate with them.

@Ravager619 Started off as low-end, but I’ve been working up to a fancy, fine-dining place as I make more money.

@Mhmd_Yassir More info will be coming out in the next few weeks. Sorry I can’t comment right now.

@TheSimScraper They’re added to your inventory so you can collect and decorate with them.

On a side note, it appears The Sims deleted a reply originally revealing that players cannot work as chefs. Thanks to graventhe on the forums for the image. 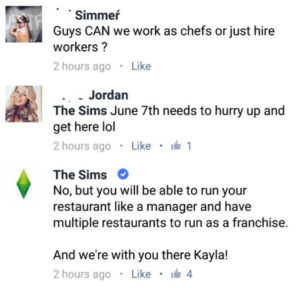 We went back and forth. Chose to stick with the traditional notepad. It made more fictional sense for a larger variety of themes.

We'll be able to give more details as we get closer to the release date. Sorry!

It would be a pretty sorry restaurant system if you couldn't customize which drinks are on the menu though, eh? 😉

@thesimplynando @TurkkiToni @TheSimScraper More details coming. Hang tight for a deeper dive into what you’ll be doing as the Owner.

My Sim is so hip! pic.twitter.com/KkUwQpJGBz

Nope! This is part of the Dine Out gamepack dropping on June 7th. 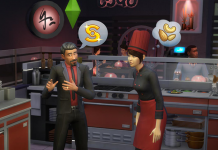 The Sims 4 Dine Out

The Sims 4 Dine Out Now Available For Console

Amazon Sale: Save on The Sims 4 Dine Out and Kids Room Stuff