When asked if they were able to shed any light on the current limitation with apartments in the Sims 4 City Expansion, SimGuruEugi took to the official forums to explain.

You can think of an apartment building as a neighborhood. They are authored by our world creation team as part of the world we ship for the EP. (We actually can’t patch worlds without invalidating saves).

If we had allowed the creation of apartment buildings from Build/Buy, we would not have been able to achieve the look we were going for. For instance, B/B limits construction to five floors, but you want buildings to look like they have many more than that, so you can look over the city skyline.

There are also performance implications. You might want a building to look like it has, say, hundreds of windows and small items of decor. If those were actual B/B objects, they would all count against our performance metrics.

We also allow multiple households to inhabit the same building. So we’d have to add some element that would have allowed players to define the boundaries of an apartment. If it wasn’t properly authored (e.g. lacking front doors), some game functionality might not work.

So we reached what we think is a good compromise. We modeled “shells,” which are apartment buildings that look great but are technically one object, and then we allowed B/B operations inside it. I can answer more specific tech questions if you have any. 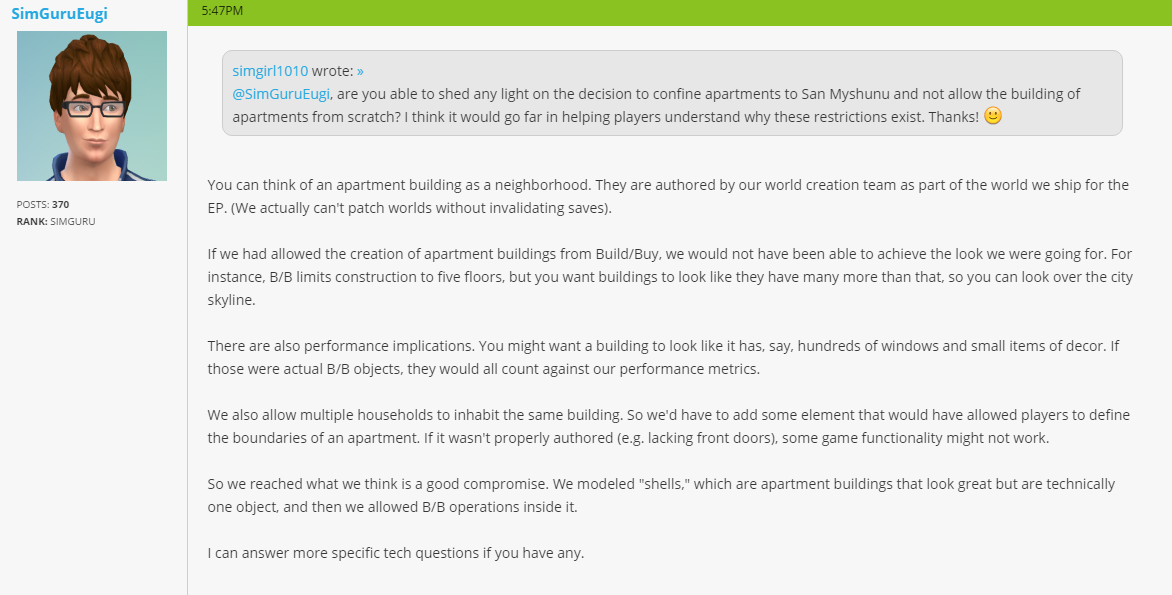 There are up to four apartments per building. All those apartments are playable. You can move in/move out of them, and they can be inhabited by NPCs. You can interact with your neighbors by knocking on their door and whatnot.

For each apartment building, the playable space is one floor in that building. The elevator takes your Sims from street level to their floor.

Penthouse are not a lot type. You can change the penthouse’s venue type to any type, and it’s really cool. The premade lots in San Myshuno are gorgeous. Can’t wait for you guys to play with it. I didn’t work on EP03 and when I saw the final world I was really impressed with what the team pulled off!

Were there any discussions on using the already existing tool for defining rooms in the game for making a apartment-making tool that would allow us to define which rooms would be which apartment on a lot?

There were a lot of discussions, but I wasn’t involved in them.

We can’t convince you that you’ll like something just by talking about it. What we can do is put out what we think is a great product and hope that you’ll give it a shot

We do listen. If we didn’t listen, we wouldn’t be here. Many players want many different things. If we not only listened, but actually executed on what every single player wanted, we’d have to ship thousands of versions of the game. Part of our job is gathering all the feedback and come up with a product that’s feasible and satisfies the most common case.

If we concentrated all our efforts on delivering a pack that was all about building apartments, then it’d be unfair to those players that care less about building and more about storytelling, for example. If you’re all about building, I think you’ll really enjoy penthouses and what’s going to be in the pack. And if you’re not into building at all, you’ll also get a lot of enjoyment out of City Living. There’s something there for everyone. That’s what listening is all about.

Any chance there will be cheats that will allow us to build apartments without the shells? Or are the shells pretty much “stuck” to the apartments, meaning you can’t have one without the other?

I think the shells are objects, so I’m sure modders will find ways to “liberate” them and do crazy things. It’s just not something we support in worlds other than San Myshuno.

There may or may not be

some added career functionality, but I can’t talk about that, and I don’t know how/if it will invalidate mods. Apartment traits should be fully moddable.

Like I said in a few replies above, you can think of apartment buildings like neighborhoods. We don’t go back to shipped worlds and change the lot/neighborhood configuration, because that might negatively impact your existing lots.

We will definitely be considering adding lot traits in future packs. And you won’t need to own EP03 to use them.

Apartment buildings have between two to four apartments. All of the playable apartments for a building are on a single floor. The area around lots can be accessed without loading screens. It exists in other worlds as well, but it is especially large in San Myshuno. We did not change the way households are managed. If you move your Sims in with a rommate, in the same household, they’ll become playable.

The festivals are specific to San Myshuno, so I don’t think they’d work in other worlds. There are no new editing tools, but you can do everything you can do in other worlds. So you can freely build on any lot, including apartments and penthouses, from Manage Worlds.

The elevators require an apartment shell to work properly. I do not believe they are available in the catalog.