In today’s Sims 4 Patch Live Stream, SimGurus talked about the various ways they plan to communicate with players moving forward. As we reported earlier this month, Maxis stated that quarterly teasers were no longer the right format for sharing information.

Today, Maxis has revealed their new communication strategy and shared how exactly they plan to move forward with announcements and information. Most of the new changes will begin in September, but here is a run down of everything that was stated today by gurus on the live stream, on Twitter, and on the official forums.

So before we get going, I know that there was a lot of hype for this, we said “hey we have an update coming up” “hey we have a stream coming up” and everybody started assuming everything. One of the things we want to do is that we want to stream a lot more and one of the things we recognize is that we pretty much only show up to talk about the new expansions and so we want to stream a lot whether it’s for small updates, just playing the game, or just sharing things with the community. Unfortunately because we’ve only shown off expansions in the past, I know that there’s a lot hype and expectations for what this one would be, but one of these had to sort of break the ice and be the first stream that is not a big expansion or a big announcement.

This is going to be more the norm and reality is is we tend to have monthly updates whether it’s free clothing content, free objects, new features, or new updates. Some of them are going to excite some parts of the community, and some are going to excite other parts of the community. This is something that we’ve been wanting to do for a while, and something I’ve said a lot on Twitter, is that we plan to keep supporting the sims 4 for 3 plus years. I know I’m thinking about stuff for 3 plus years out, and this is a bit of an indicator for that because we’re doing some nice investments in what we’re up to. So we updated the gallery and this is the first of many updates. We have more planned for this calendar year. We can’t talk about that just yet, but this is just the first foundational step.

We have more stuff planned for August, and more stuff after that, so stay tuned. Some months will have stuff that some players will be excited about, and other months will have stuff others will be very excited about. We have a lot of cool stuff coming out. We are trying to do a lot more streams – a couple a month actually – and this means that sometimes we’re gonna be showing off expansions, sometimes are gonna be showing off updates, sometimes we’re just gonna be playing the game with nothing to announce at all.

I know a lot of you have been used to us using the streams to announce new things and so that this might be a little disappointing, but we’re hoping to sort of get into a pattern if we just want to talk about the Sims, we’ve been working on. Sometimes hopefully we could show you guys some new exciting things, and sometimes we’re just going to show you little tweaks that we’re working on. Again, we’ve said this a couple times now, this is a tiny gallery update, that’s why we said don’t get too hyped.

We have big things planned for the gallery and the game, and there’s a lot of stuff both free and otherwise that’s going to be coming throughout this year. Just stay tuned, we have a lot of cool stuff for you guys.

As I promised, I wanted to talk a little bit about how we’re going to be communicating moving forward, especially here on Twitch. As grant mentioned, we’re gonna be using Twitch a lot more, and I know over the last month or so when we announced that we’re not going to be doing quarterly teasers anymore, people have been wondering what we are going to be doing.

We’re gonna be looking at doing bi-weekly streams here on our Twitch channel with SimGurus where we’re actually just going to be popping in and playing the game and chilling out with you guys for a couple hours every two weeks. This is just gonna be something fun that we can do where you can get to know our gurus a little bit better and you can watch us enjoy the game like you guys are enjoying the game.

We’re also going to be starting something called Maxis Monthly, where we’re going to be doing a one-hour show every single month – probably around the end of the month – where we’re gonna do a recap of all of the awesome things that happened in The Sims over the last month. We’ll also showcase some awesome player created content both in the gallery and in the community as a whole, and talk about what might be coming up in the next month or so. We’re hoping to kick all of this off starting in September, and we might start a little bit of it here in August, but definitely look for these things to be coming in September.

We’ll be sharing a big schedule with you guys so that you can mark your calendar, and make sure you can tune in for the streams that you want. Thanks for joining us for the live stream today, I know it was a little different than how we’ve done in the past, but we’re really trying to just engage with you guys a lot more about all all things in the sims, and not just you know big releases. As grant said there’s more of them coming, and don’t worry, there is going to be more paid content in the future as well. We’re not going anywhere and we’ve got a long future ahead of us.

Thanks to all who joined the livestream! Now that you know what the update was and the livestream, so that we can better improve, how far in advance should we notify you of livestreams for patch updates like this one? We know a week may have been too much and want to be better.

We definitely are going to have a regular schedule for many things. But there will still be surprise streams here and there. 😛

These are some great pieces of feedback. We definitely want to improve production value of our streams and are looking at getting a new camera, better mics, and a better background.

In case you missed the livestream, at the end I quickly mentioned a few things about how we want to approach Twitch and Communication! We have two new initiatives coming to Twitch beginning in September. (1/3)

Maxis Monthly – Monthly one hour livestream where we recap what happened in the Sims the last month, showcase some cool community creations/content, interview a SimGuru or two, and maybe even look forward to what we have coming the next month. (2/3)

Guru Garage – Biweekly two hour stream where a couple Gurus will get in there and play the game and hangout with Simmers. We will let the Community have input on what they will do, and you'll get to know the Gurus a bit more. All fun and maybe a bit of weirdness. (3/3)

It will be different each month and will be dependent on what we have coming up. I know folks want a full roadmap, but we are unable to share that.

You'll have to tune in and see. It will be different each month, based on what we have coming up.

Thank you for the feedback! We will likely continue to do livestreams for patch updates, even when it's something like the Gallery.

First I want to say thank you to all who tuned in to today’s livestream to check out the update to the Gallery! We hope you all enjoy the new look and feel to the Gallery. The Gurus have been working hard on this for quite some time and as SimGuruGrant said, this is the first of a number of future updates to the Gallery.

Second, if you stayed until the end you may have caught me briefly talking about some upcoming initiatives for The Sims on Twitch. Since we know not everyone could tune in, I wanted to share a little bit more about our plans for Twitch in the coming months. You’re definitely going to be seeing us a lot more!

Beginning in August we plan to launch a new stream series called the Guru Garage. Every two weeks you’ll be able to tune in on a set day/time to hang with the Gurus and chat with them as they play The Sims for two hours. You’ll be able to ask them questions, get to know them a little more, and maybe even have a bit of an impact on what they will be doing on the stream. We will be switching up the SimGurus so one stream you may see SimGuruRomeo and SimGuruNinja, and the next it might be SimGuruGrant and SimGuruKimmi. This stream series is all about having fun and playing The Sims with SimGurus, who also love the game.

Then beginning in September we will be launching a new monthly series called Maxis Monthly. Each month, on a set day/time, you’ll be able to tune in for an hour “talk show” hosted by me! During this hour we will recap what happened in The Sims over the previous month, host interviews with members of the Dev. Team (learn a little more about their job and what they do), showcase cool community creations, and even give a peak at what will be coming in the next month.

We will also continue to do livestreams for updates/patches and releases, though these will likely be bit of a surprise and will be announced 72 hours in advance. Like I said, you’re definitely going to be seeing a lot more of us.

We are working on finalizing the schedule for our first series of Guru Garage and Maxis Monthly livestreams and we will share here once it is complete so that you can get everything on your calendar and tune in for those streams you are interested in.

We are so very excited about the future of The Sims and bringing more consistent and frequent communication with the Community. 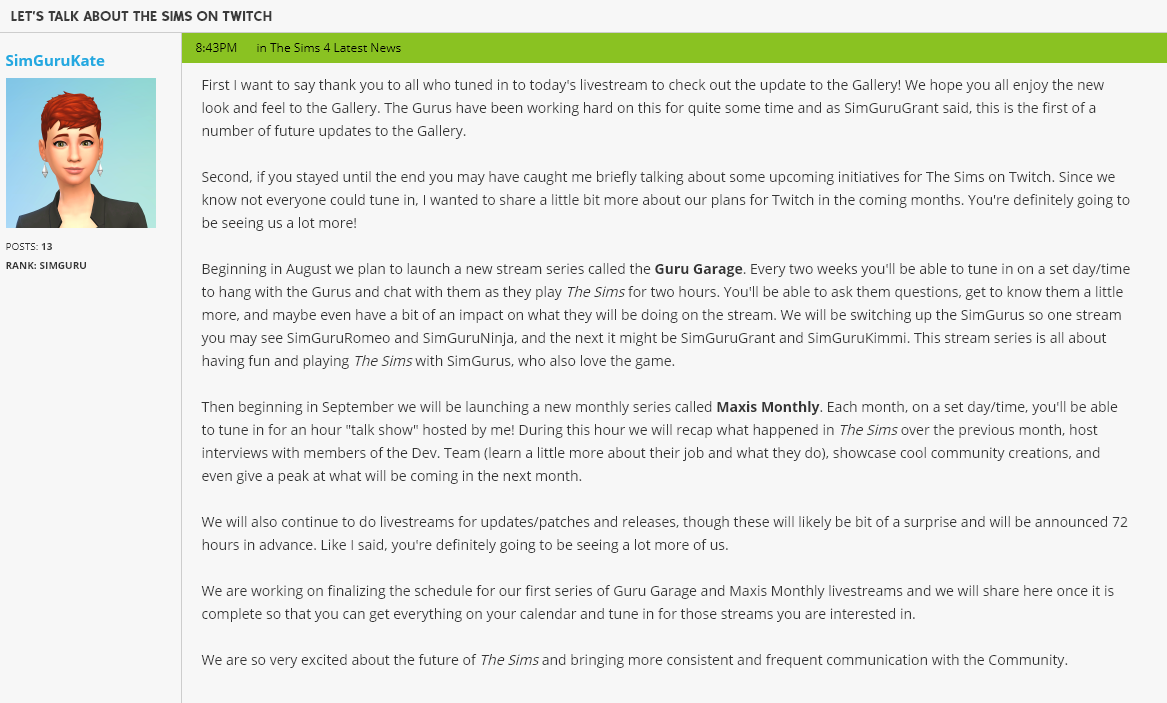