Speculation - Could Weather be next on the list for Sims 3? | SimsVIP

I am a bit late on posting this article, but anywho…

Seasons & Weather has always been a favorite in the Sims Community.  Besides Pets, Weather is definitely one of the most asked for Expansions yet.

Amy Tucker over @ Sims 3 Gamer had a chat with Ben Bell @E3, and when she asked if the next expansion would be Seasons, “everyone was quite tight lipped”. Though they did confirm that a University EP is not the next pack they’re working on.

Now it’s obvious many of us can tell by the following pictures,  the setting of the New World will take on the look of Autumn. 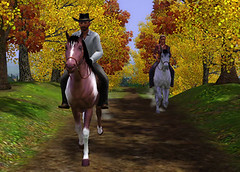 Could it really be that Seasons is next on the list? Are these small -but very obvious- details, hints towards the next EP?  This does not mean Weather would be included in Pets, but it does hint us toward a seasonal change in the new town.

The following article, is one I picked up from Sims.Mixei.RU.  It appeared that one of their members had found a page on Sims Wiki – (Wiki’s are not reliable) – but anyhow, there seemed to have been a few who “saw a leaked”  Seasons Trailer, named The Sims 3 Weather Days.  I never believe anything I see on Wiki’s (or don’t have a valid source for that matter) but I figured I’d show you anyhow.  The page has since been deleted as it has no validity to it. 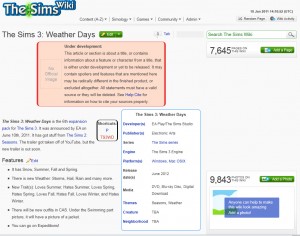 Before you chew me out, yes I know this is completely fake.  I hardly believe there was a leaked trailer of any sorts, and I’m 100% sure there would have been loads more people claiming they had seen one.  Heck, someone would have grabbed the video from YouTube if that was the case. 😉

However it may be, Seasons/Weather is definitely something I would believe the Sims team is working on, and I’m hoping it will be – if not the next – an upcoming EP,  sooner rather than later.