The Sims 3 Store One With Nature Review | SimsVIP

Disclaimer: The story told in this review is purely for entertainment purposes. Any resemblances to actual people, real or imaginary, is purely coincidental. Even if it’s intentional.

Before I get into the actual review, I must relate a story. After a recent series of incidents in which I scandalized a group of people who are far too huffy for their own good, I was politely requested not to bring up anything related to the most embarrassing incident. In particular, anything related to the hot dog stand near the highway or any use of the word “aardvark.” I promised them they would have their answer in this article.

So, are you ready for an aardvarking good time?

I was wondering, at first, if we could grow trees inside now with this set. Then I learned there is no premium content. That was as disappointing as when I learned aardvarks are not related to anteaters.

My main concern with this is that they would overuse the dead trees. I will have to see how it looks once I’ve redecorated a house, but this could easily have crossed the line from tasteful to tacky without even a blink. Then again, it may also be a lot more tasteful when used properly; I’ve found some of the tackier choices of decor in this game can be incredibly tasteful in the right hands.

First, let me admit that I was having some trouble deciding on names for this family. Finally, I said to myself, “Why not Aardvark?” After some consideration, the name really stood out, so I decided to go with it. After all, it’s not like they will be aardvarking all over town; they just exist to try on outfits and let me decorate a home. 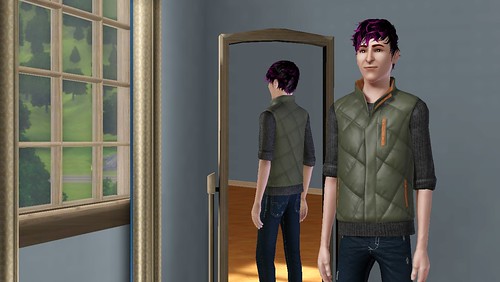 Ultimately, the top is simple, elegant, and works for Johan Aardvark. I could see using it as part of other outfits for other sims, maybe with some recoloring. Overall, nice to see a male outfit for this game.

Time for the next Aardvark!

The first outfit is very lovely, and recolored would work well! In fact, it may be an outfit I have to use often; I could actually imagine a plantsim or witch wearing it and looking good in it! This outfit can even serve sims well on dates. I ended up keeping this one for Lisa Aardvark, since it ultimately turned out to be the superior of the two options for me.

The second… there’s nothing nice I can say about it, and that is really shocking for me. If it wasn’t for the chest straps, the outfit would be perfect.

So, let’s see what the teenage daughter, Megan Aardvark, ended up wearing! 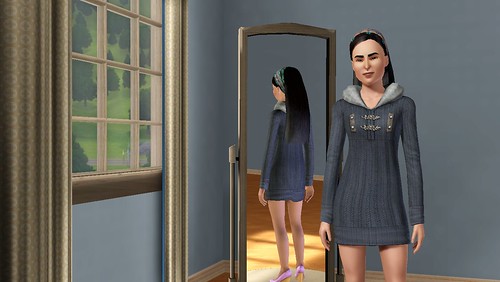 Why did they choose this one for teen girls? See my previous comments on the adult version about this. 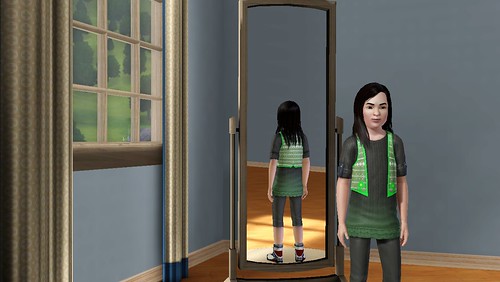 I’m going to go ahead and judge this one based on real-life instead of the game version. I have seen the real-life version of this outfit, and in colors that make it look good. As such, while some may find this outfit, particularly the neon-green vest, to be hideous, I know that recolored this outfit can actually look amazing. And when I checked the in-game colors, this combo looked to be the worst of the defaults, so in general this outfit does get better.

And, lastly, John Aardvark. And, yes, I was running out of creativity for names by this point. 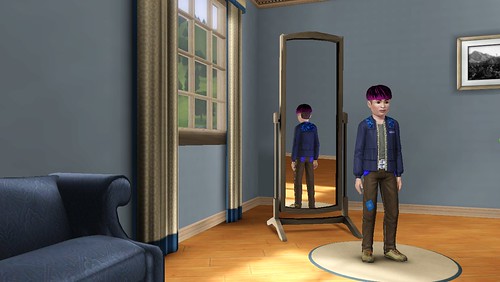 I must admit this outfit is one I do not like and whose purpose leaves me puzzled. Aspects of it, even on the default recolors, leave me confused as to the intended impression of this outfit. But, that may have been the point… an outfit that was repaired without much of its purpose kept in mind. That does happen in real life. But, it’s not one I will ever use.

The clothing seems light and I admit I don’t like half of it… but there’s nothing really to complain about. There are other sets that have nature-themed clothing, so this set feels more like it is filling in the holes from those other sets rather than really attempting to throw out a lot of new CAS content. Plus, after Midnight Hollow (TOYS! OFB! SQUEE!), it is not surprising they would choose a less work-intensive set on the CAS side. After all, the developers need to relax too.

The decor is best separated into two categories: That which is generally just artistic or unusual, and that which is actually usable in most homes. Neither category has any advantages over the other, as some items you might choose for general-usage and some you might choose for a specific theme. In general, I tried to mix in some items from University and the Stones Throw Greenhouse, as both have furniture that focuses on recycling, but in the end decided not do a full house due to the headache involved in trying to find pieces that looked good together. Plus, I didn’t want to go through the hassle of seeing what kitchen content I have that matches the theme.

First, I will start with the content I feel is more artistic and unusual: 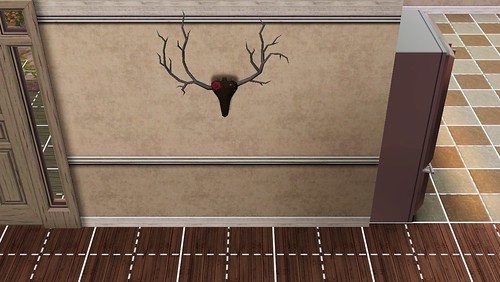 To start with, all of the content seen in these pictures would actually look good in a cast-away home, like you can build with the Limited Edition content from Island Paradise. Even the items from University and Stones Throw Greenhouse would fit, meaning that with this set you may actually have enough to build a very nice, complex cast-away home. The branch ceiling light would also look good in a fairy home or greenhouse, the bookcase could be recolored to be a disturbing addition to a Cthulhu-themed home, the tree wall item with the hanging pictures can fit in a child’s room as art they did, and the wall hook wall item could fit in any country home. The two tree limb statues would work well in a modern art section of a museum.

Overall, this section is actually better than I initially feared.

Except that deer head. If it wasn’t for the flower, it would be perfect. The flower just makes it look odd.

Next up are the items I feel are general-usage:

Overall, ever item from this set in those pictures are items I feel can be easily fit into general-usage with proper recoloring. In fact, an artist friend of mine has already given me an idea on how to get the branch divider near the bed to fit into Midnight Hollow (TOYS! OFB! SQUEE!). These items would also fit very well in a fairy home. And, I am happy to see we are getting more dressers as of late… my witch has been itching for things to enchant.

Also, the plant wall item would fit in a lot of homes, in a greenhouse section, or even in just a regular greenhouse.

Let me start by saying this: Despite attempts to sell it as a cohesive set, the division I demonstrated in Decor is actually a division of two entire design philosophies; one is sleek and modern, while the other is haphazard and twig-themed. This set really does not work well with itself. As such, it is far better to buy this set for the parts, not the whole, as the whole doesn’t actually work.

Would I recommend this set? It honestly depends.

If you are like me and looking for items to add on to a true nature-themed home, this set is one that you can safely skip. A lot of the items don’t actually fit the nature theme well, but instead fit other themes better, and the clothing alone is not worth the cost of this set, even discounted.

On the other hand, if you are looking for stuff for your island survivor-style homes, just want to have more options, or want items that fit well in a fairy-themed home… this set may be for you.

If you just happen to like the look of the items and want them… buy it.

Now, would I recommend it personally? Yes. The items may not work together as a cohesive set, but the items themselves have a lot of uses, some of the items are surprisingly adaptive, and the set itself can be useful in adding decorations to a lot of other types of homes, or even to fill in empty spots in a museum. Plus, some of the outfits are actually good. And, to be honest, despite my distaste for some parts of it, the set has really grown on me. I have to admit I like it, despite its quirkiness.