Here to kick off December’s Community Spotlight is YouTuber XUrbanSimsX! In a brief introduction below, she gives readers a chance to learn a bit more about what she does. Take it away Jen! 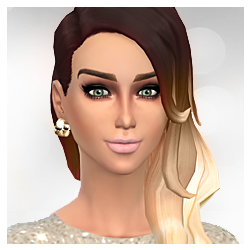 Hey there guys, XUrbanSimsX AKA Jenn here! I am super duper excited to of been asked by simsVIP to share a little bit about myself and my channel in Decembers Community SPOTLIGHT! EEEK. Okay, so here we go!

First and foremost. Many of you may not know, but I am a 25 year old sim lover based out of Seattle, Washington. I live with my husband, Juan. Our 8 year old son, Dominic and my crazy gato loco as you may know as Yazi.

My channel, was originally created in 2009. The original idea for my channel was to create music video machinimas, and Sims 3 stories. Ever since I was a kid, I would write screen plays with my friends, write songs, create books and submerge myself in movies. Thriving off of creating my own stories brewing around in my head.

Even though, my channel didn’t go as I had planned. I still lurked around, finally finding out about Sims Let plays via Headbuttarcade (Andrew) Now known as AndrewArcade! Falling in love with his game play and the way he would keep me entertained for hours. It started to feel as if it was a tv show series that I was religiously waiting on to air.
Some time later, I found TheQuxxn. Being the first girl simmer, I had come across. She influenced my greatly to start doing my own let’s plays. Using this channel, I had abandoned years before.

In 2012, when seasons launched. After a few attempts at starting my own lps. I finally got the hang of it and the ball rolling. I wanted to differentiate myself somehow. Thus incorporating the one thing I knew I was good at, storytelling. With that said, came seasons. A heartbreaking story of a widow, who had lost her husband. Leaving her, alone with their two children. Conner and Kasey. She moved with a old high school friend, Jake Summers a single bachelor who knows NOTHING about children, let alone how to raise them. Its a cute story, with many ups and down.

You can find them to this day, continuing in my generations let’s play and more currently in The Sims 4 Legacy challenge.
Along the way, I have done several lets plays. Each family/ Series I have created. The sims all their own unique stories to tell. These very same stories, are often dictated by the feedback I receive in the comment section of my videos . Allowing you, my supporters. To also have a say in their journey/story.

I also create many types of sim videos, such as Sims 2, 3 and 4 Let’s Plays. Create a sim videos, house building, custom content spotlights, reviews for DLC and so much more! Even occasionally paying homage to my channels original purpose and creating short stories in some of my said videos.

I take great pride in my channel. I try very hard to communicate and relate to my viewers as much as possible. Being social with you all is also very important to me. I have a few social media websites that pertain to my channel, but also dabble into my personal life as well. You can find those links below.

I want to thank you for taking out the time to learn a little about me, what inspired my channel, whats currently going on and where its going to go? The sky is the limit!