In a turn of events, several users have just reported that the official Sims 4 Latin America Facebook Page has been engaging in conversation them. And not just any ol’ conversation. Whoever runs this account is revealing all sorts of hints on upcoming content. 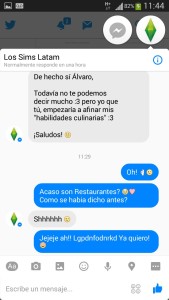 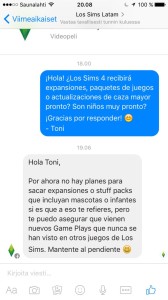 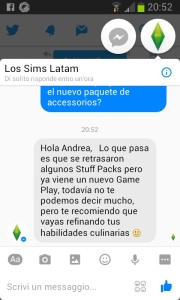 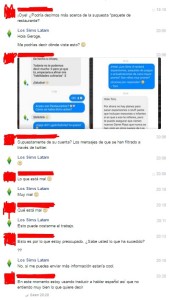 Image #1 by KaitoLen1 – When asked about upcoming content, Sims Latam replied with: “Right now we cannot say much, but if I were you I would start refining/sharpening my culinary skills”. They were then asked if that comment reffered to “restaurants” and they replied with: “Shhhh ;)”

Image #2 by TurkkiToni – When asked about upcoming content, Sims Latam replied with: “For now, there are no plans to make expansions or stuff packs that include pets or toddlers, if that’s what you mean, but I can assure you new Game Play is coming that has never been seen in other Sims games. Stay tuned.”

UPDATE – Image #3 by SimsWorld_it – When asked about upcoming content, Sims Latam replied with: “What happen is that they delayed some stuff packs, but a new game pack (play?) is coming up. I cannot say much, but I recommend you start refining your culinary skills.”

UPDATE – SimGuruLyndsay has taken to twitter to neither confirm or deny the info coming from this account. The Gurus have a great history of denying anything that is not true, and usually take a neutral stance when they cannot speak about something.

UPDATE – Image #4 by Reaver – When asked about the information they shared, Sims Latam replied with: “Can you tell me where you saw this? Oh this is bad. This can cost me my job”

It’s common knowledge that EA representatives are refrained from sharing information about upcoming content, however, it wouldn’t be the first time an official account has “accidentally” leaked information. Could this mean SimGuruNinja’s tweet might become reality?

As always, without official announcements by The Sims Team regarding the next Sims 4 Game Pack and release date, consider this to be a rumor until proven otherwise.