In the darkness, every sound is magnified. 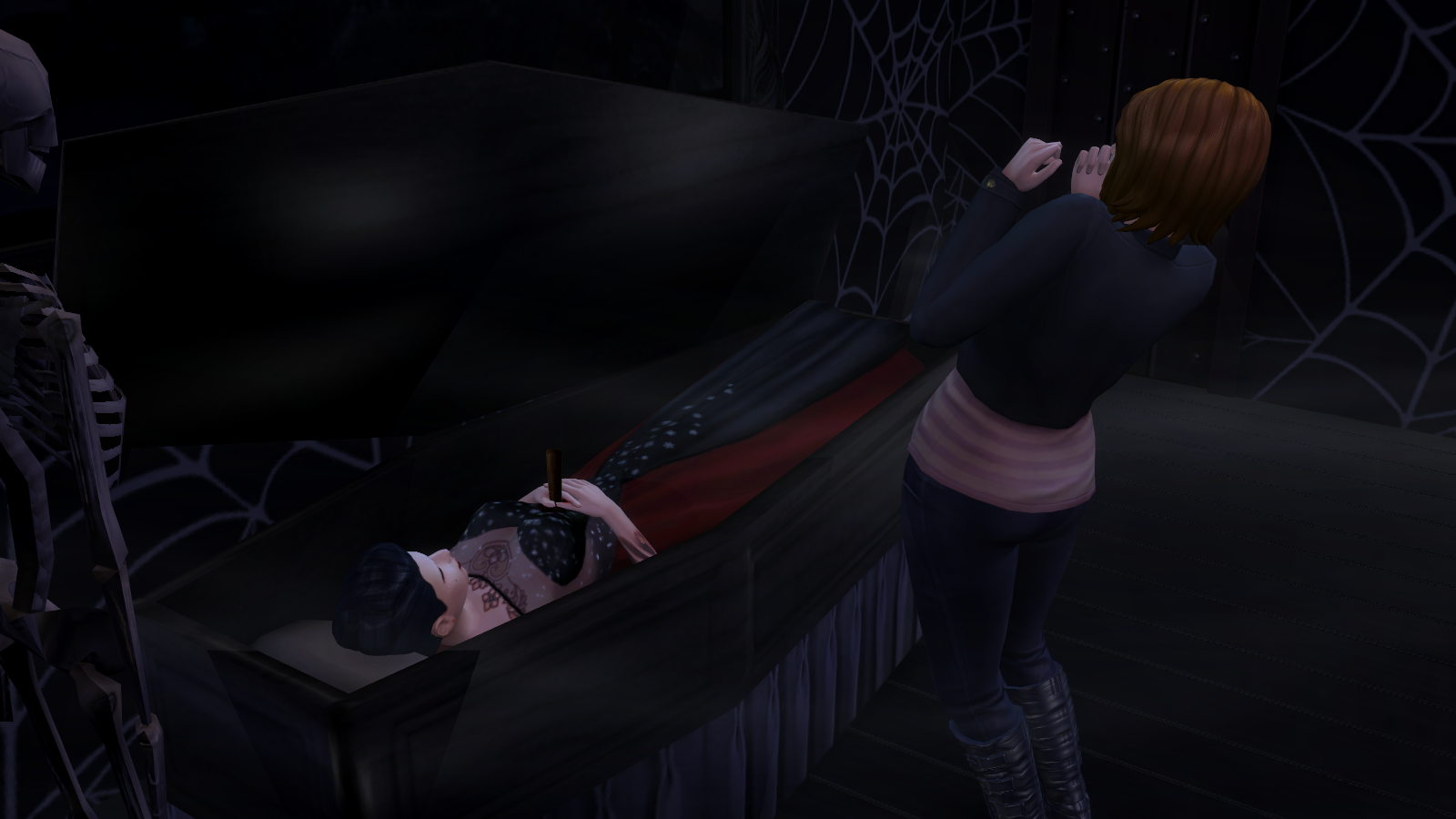 Maiike could hear the frantic voices, the thump thump thump of a pair of feet pounding up the hardwood stairs towards her. The door swung open with such force that it hit the wall, knocking into the full length mirror behind it and shattering the glass. Seven years of  bad luck. Somehow, after what she had discovered in this room already, she couldn’t bring herself to worry about superstition. That was… had been Ulrike’s job. She choked back laughter as tears streamed down her cheeks. Ulrike wouldn’t need to worry about superstition, either. Not anymore.

Candlelight flickered over her face, and she turned slowly to face the new arrival. 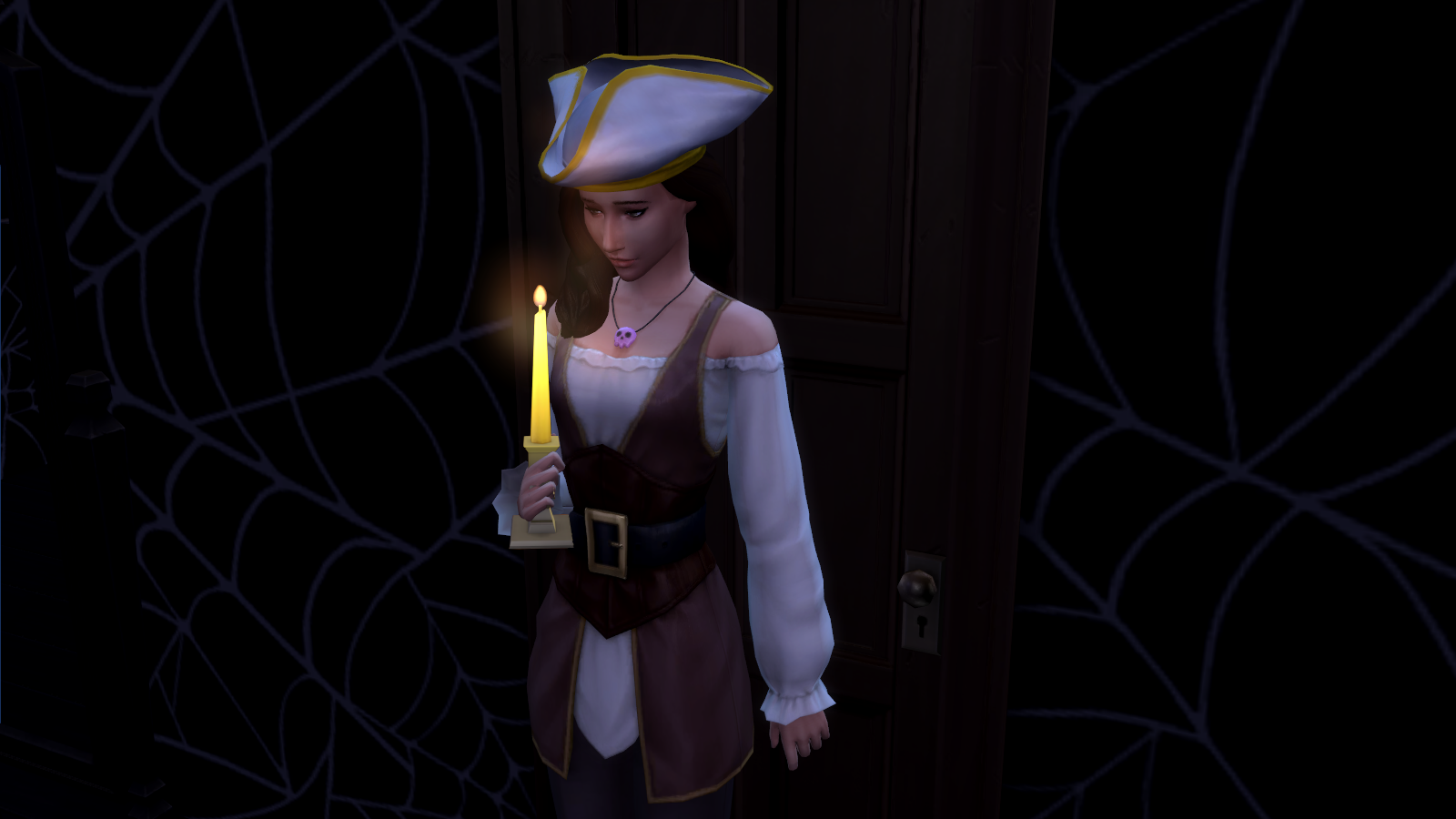 “Maiike? What’s going on? We heard screaming,” Luna said, peering through the dark towards her. “Do you want my candle? Dad’s getting more.”

Maiike nodded. She wiped her face with the back of her hand and Luna screamed, dropping the candle. The small flame sputtered for a moment before going out, plunging the room back into darkness. She could hear Luna stuttering and backing away. What..? 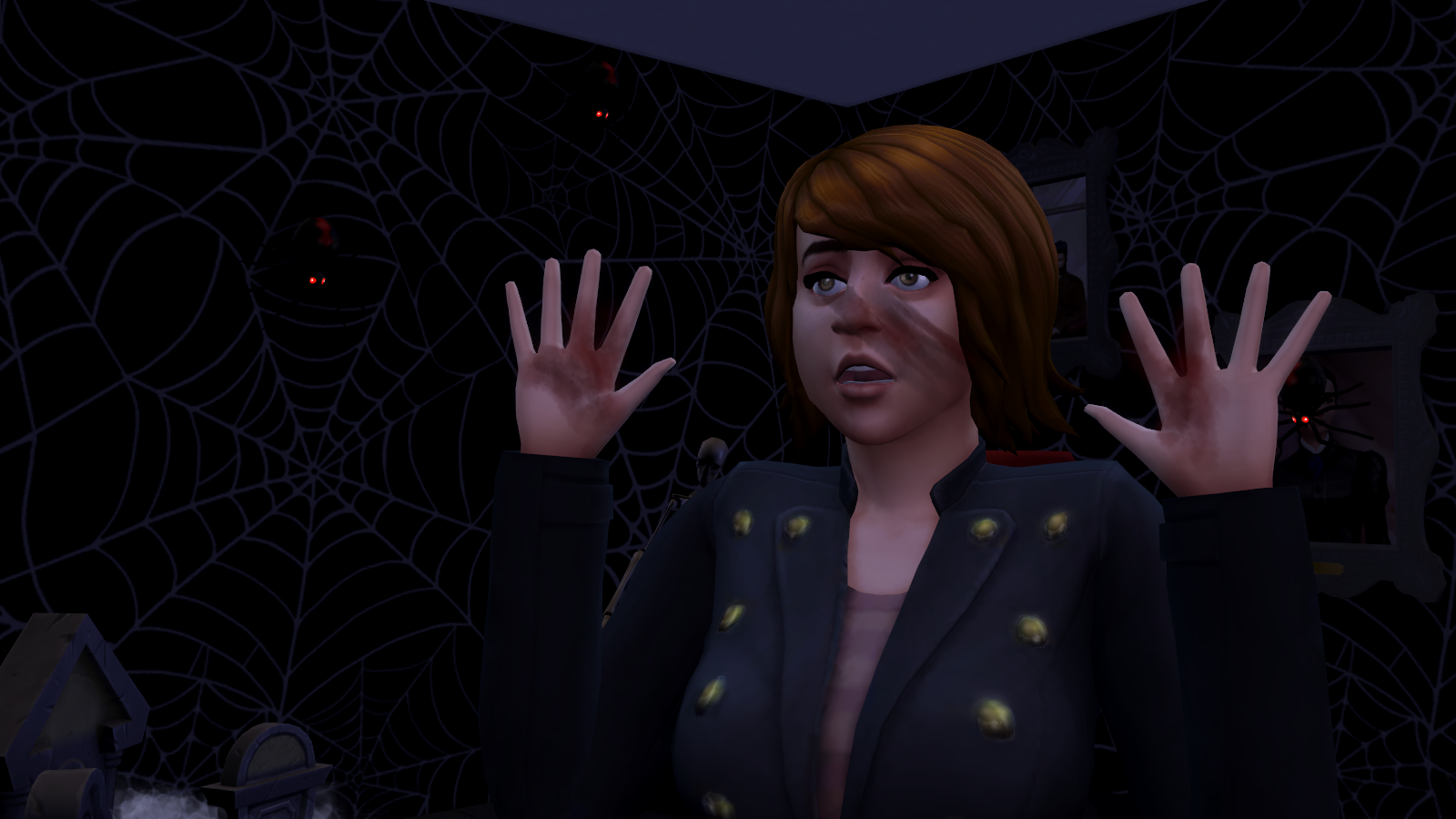 “PAPA!” she yelled, turning and running out of the room.  Maiike swore under her breath and made to follow the girl, hitting her foot on the now useless candlestick and tripping. She fell, sprawled out on the floor. Wincing, she hoisted herself into a sitting position, shuddering as her hands stuck to the floor. The blood was drying. She could feel it on her face. 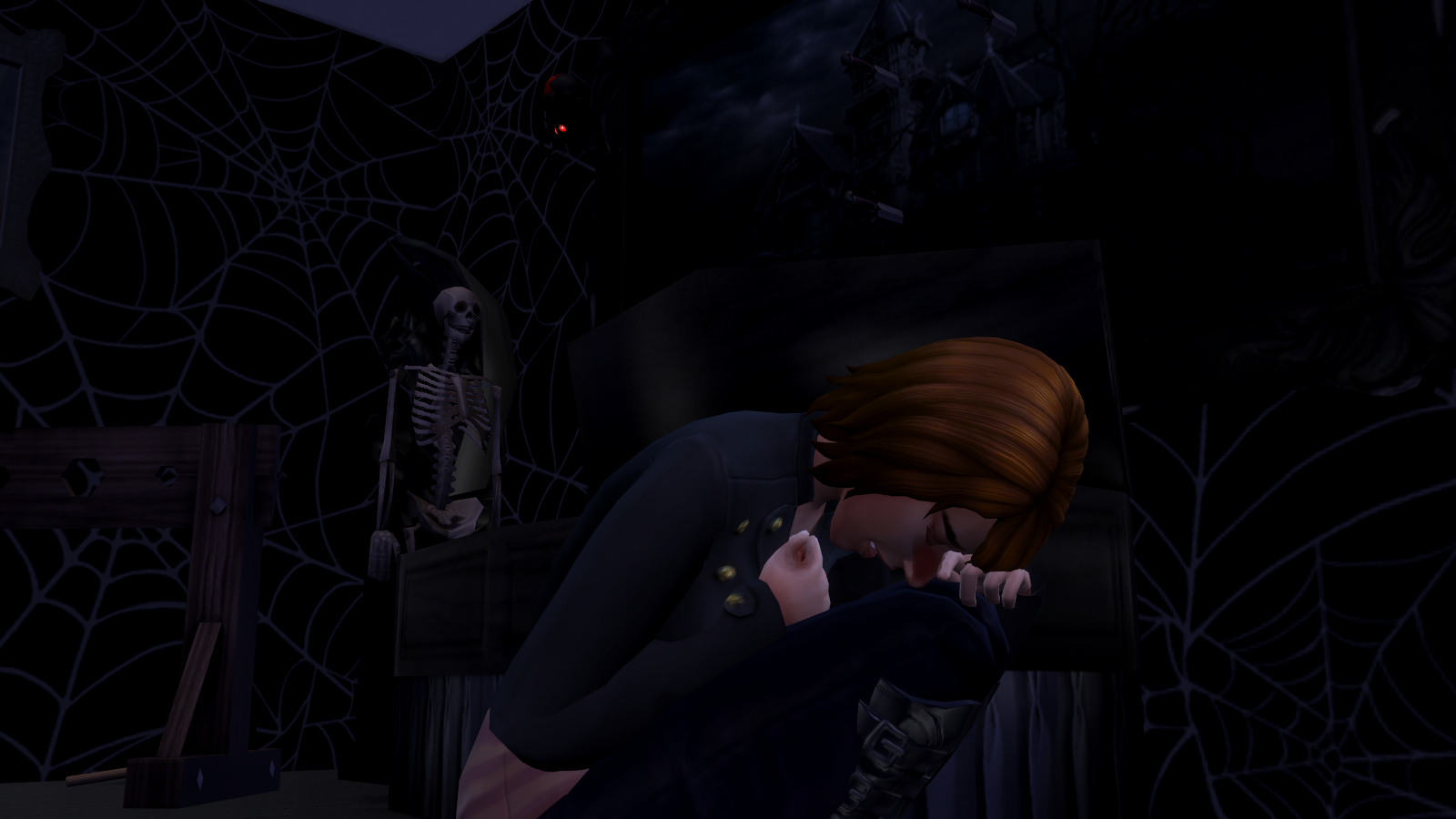 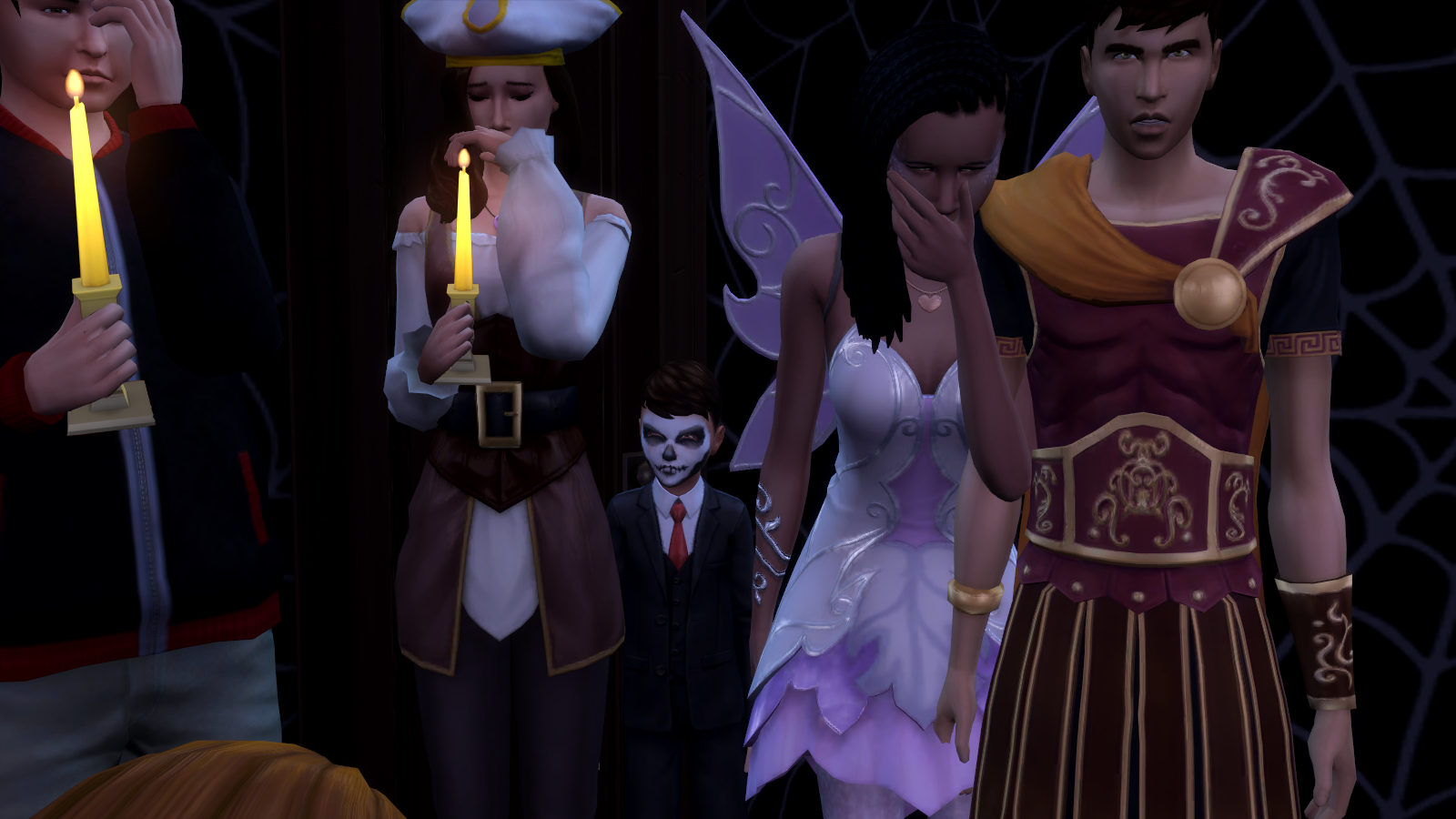 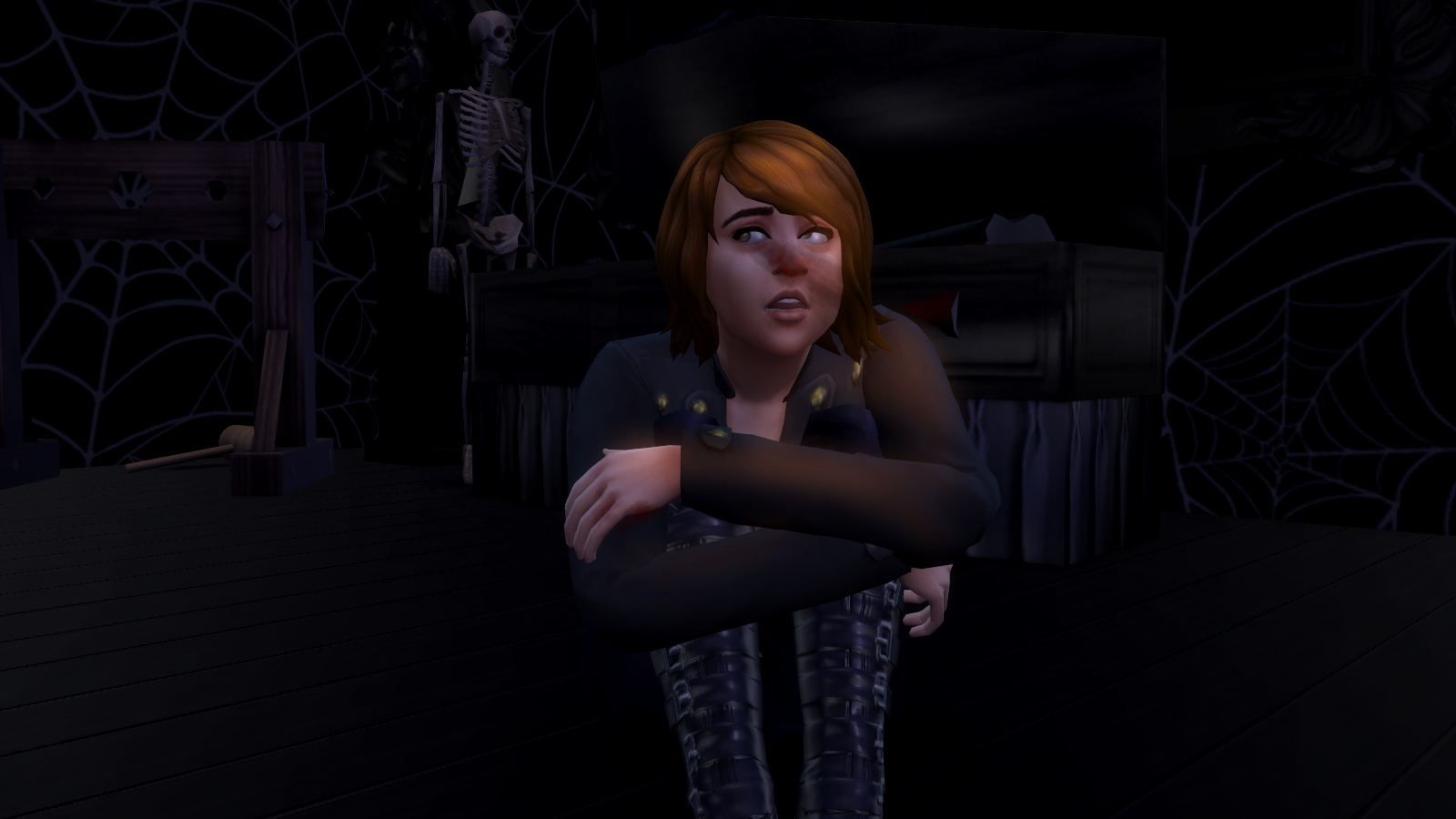 Maiike looked around at the figures surrounding her. In the unsteady glow of the flames, they looked more like demons than people. Their faces were twisted with horror and disgust, the shadows altering their features into caricatures of their emotions rather than any normal expression. Their mouths were moving, but in the small room their voices echoed and clashed rendering all off their words meaningless. A cacophony of sound and motion.

She looked up at them, eyes wide.

“Tell that to the police,” Luna said, peeking out from behind Siobhan. “Papa’s calling them now.”

“I’ve got no signal. The storm must be blocking the reception.”

Maiike couldn’t help the sigh of relief that escaped at those words. “I didn’t do it, Mr. Villareal.” 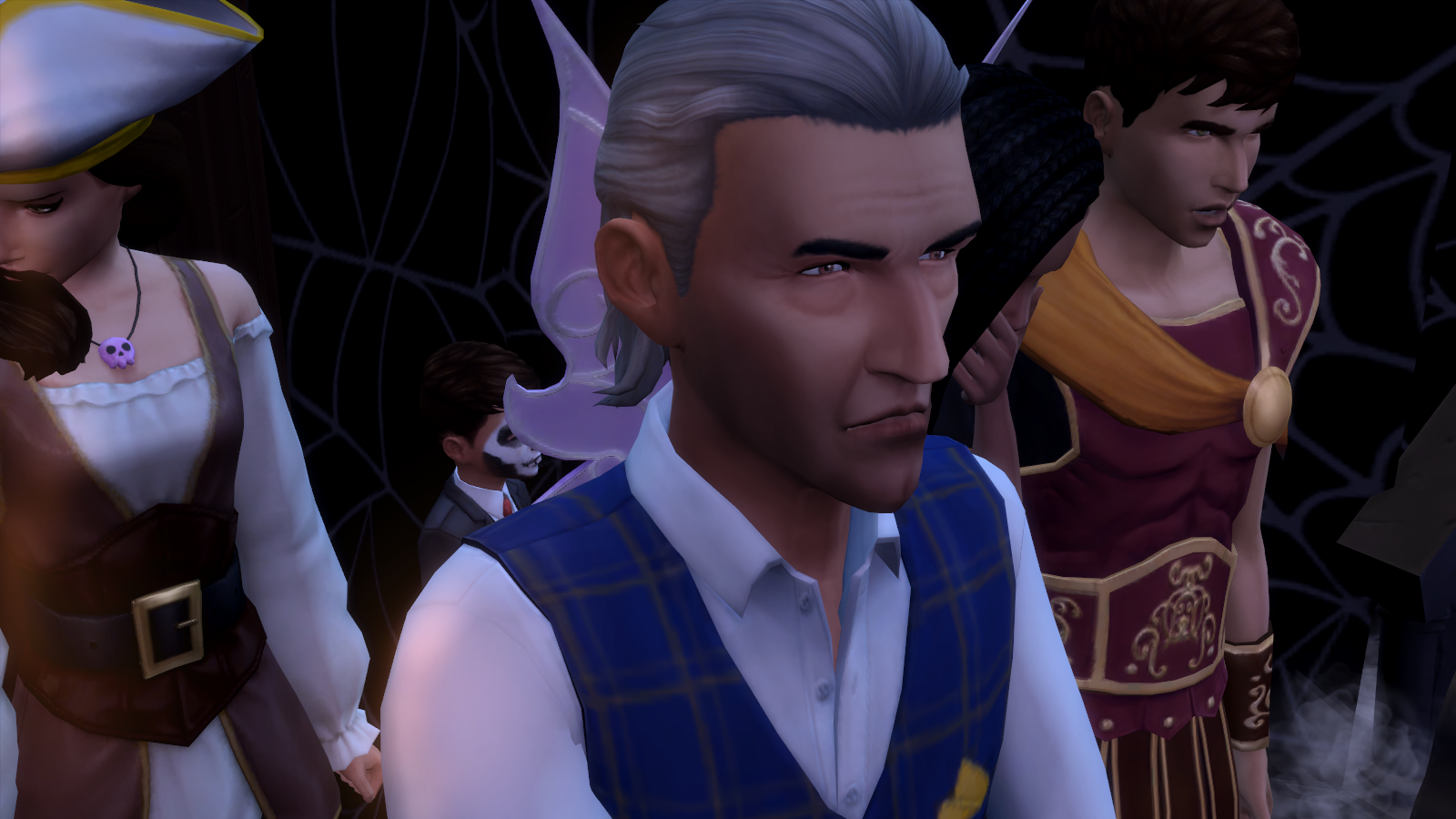 “The murder weapon belongs to you, Miss Haas. You have blood all over your hands and face, and we can all attest to the fact that you and the victim were in the middle of a…” he paused, “…misunderstanding, should we say? You must admit, it looks bad.”

“She was my best friend,”  Maiike said, barely more than a whisper. “I would never hurt her.”

“We can’t do anything with you until the storm is over, so if you didn’t do it, find out who did.”

“Dead serious, if you’ll excuse the pun,” he said, turning away. “You haven’t much time, Miss Haas, so I suggest you make the most of it.”

Maiike watched him leave, mouth agape. He was serious.

The others followed, backing out of the room.  They kept their eyes on her the whole time. Luna was the last to leave, closing the door slowly behind her. They wouldn’t even turn their back on her. They really believed that she’d killed Ulrike. She curled up, resting her head in her arms as the tears started to flow again. She was going to prison. 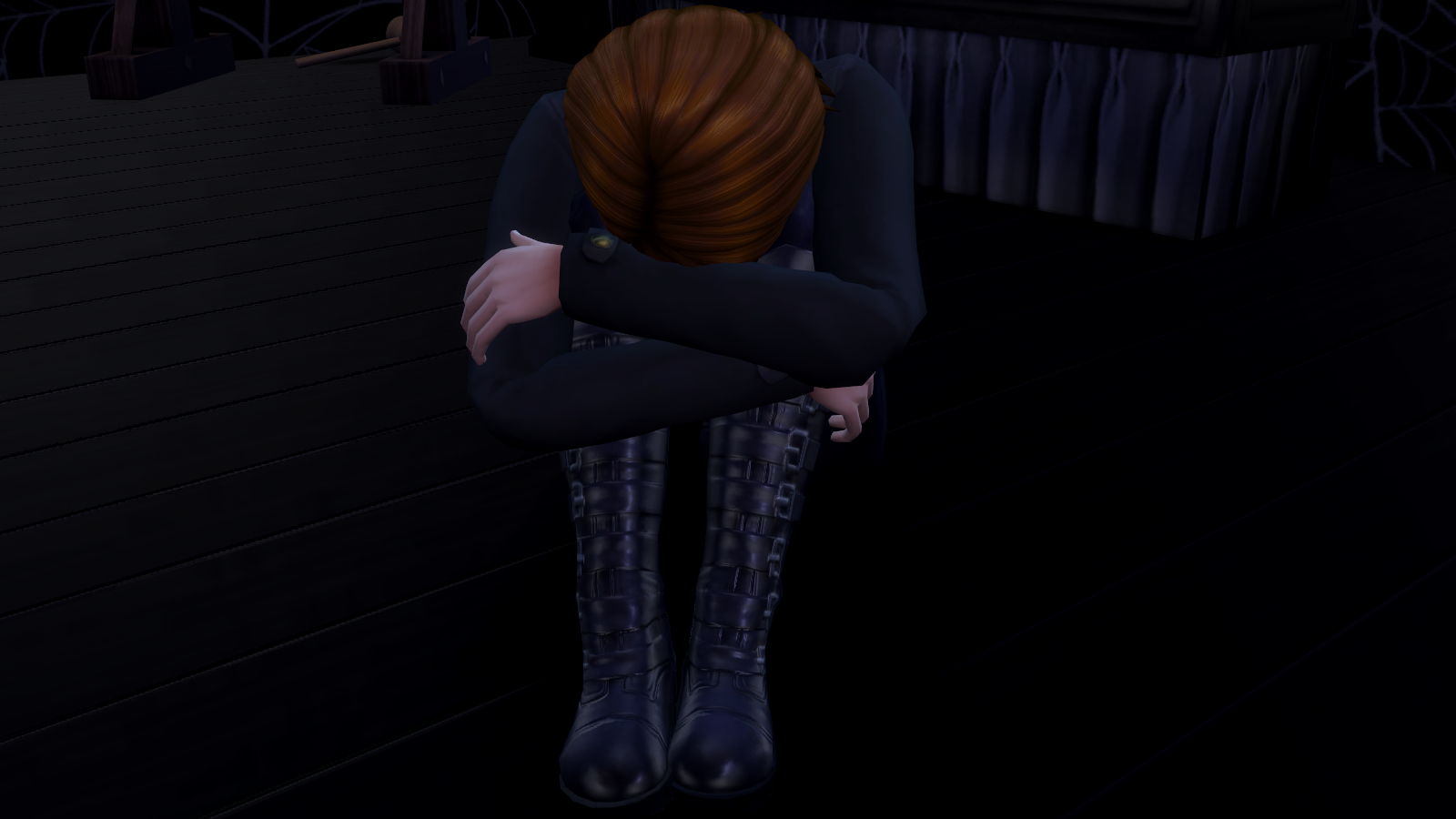 Maiike jumped and raised her head, eyes darting around the room. Who said that?

“I don’t think you killed her,” the voice said, followed by the soft thump of feet landing on the floor. A small figure stepped out from the shadows. 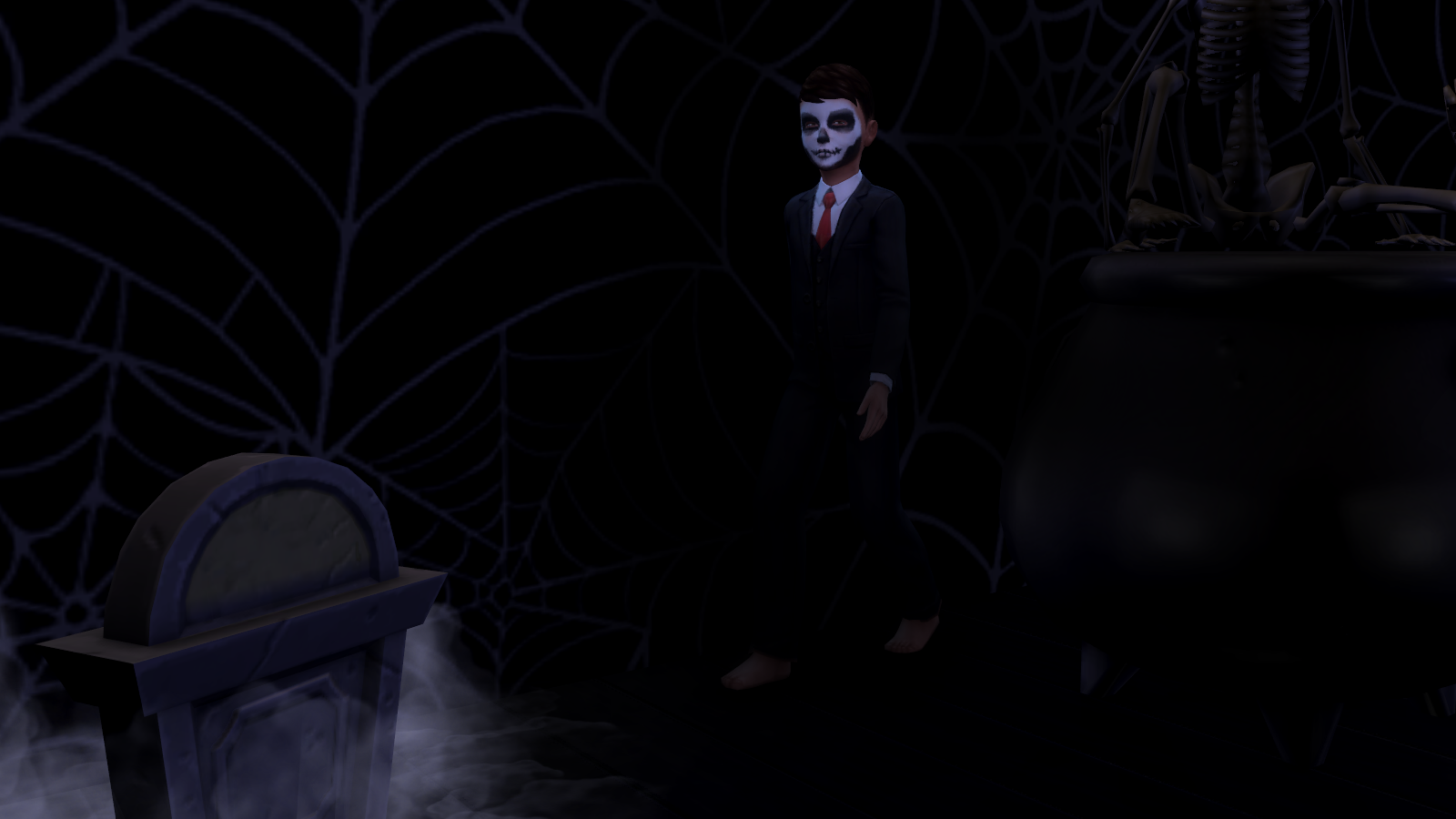 Maiike shuddered. “What are you doing here, Max?”

Max ignored her. He stepped towards the coffin and looked down at the body. “She was my friend. Someone killed her, and we’re going to find out who.”

“Yes, we,” he said, turning to look at her.  “Someone killed my minion, and I want revenge.”

“Minion? I thought you said she was your friend.”

He looked at her, eyes cold. “What’s the difference? Come here.”

She did, barely registering the fact that she was taking orders from a nine-year-old boy. It was nowhere near the strangest thing that had happened today.

“Watch this,” he said, wrapping his hands around the stake and pulling it as hard as he could. It didn’t move. “You’d need to have a lot of strength to get it wedged in there like that. You wouldn’t be able to do it, that’s for sure. No offense.”

“None taken,” Maiike said, mind whirling. “How do you know so much about this stuff?” 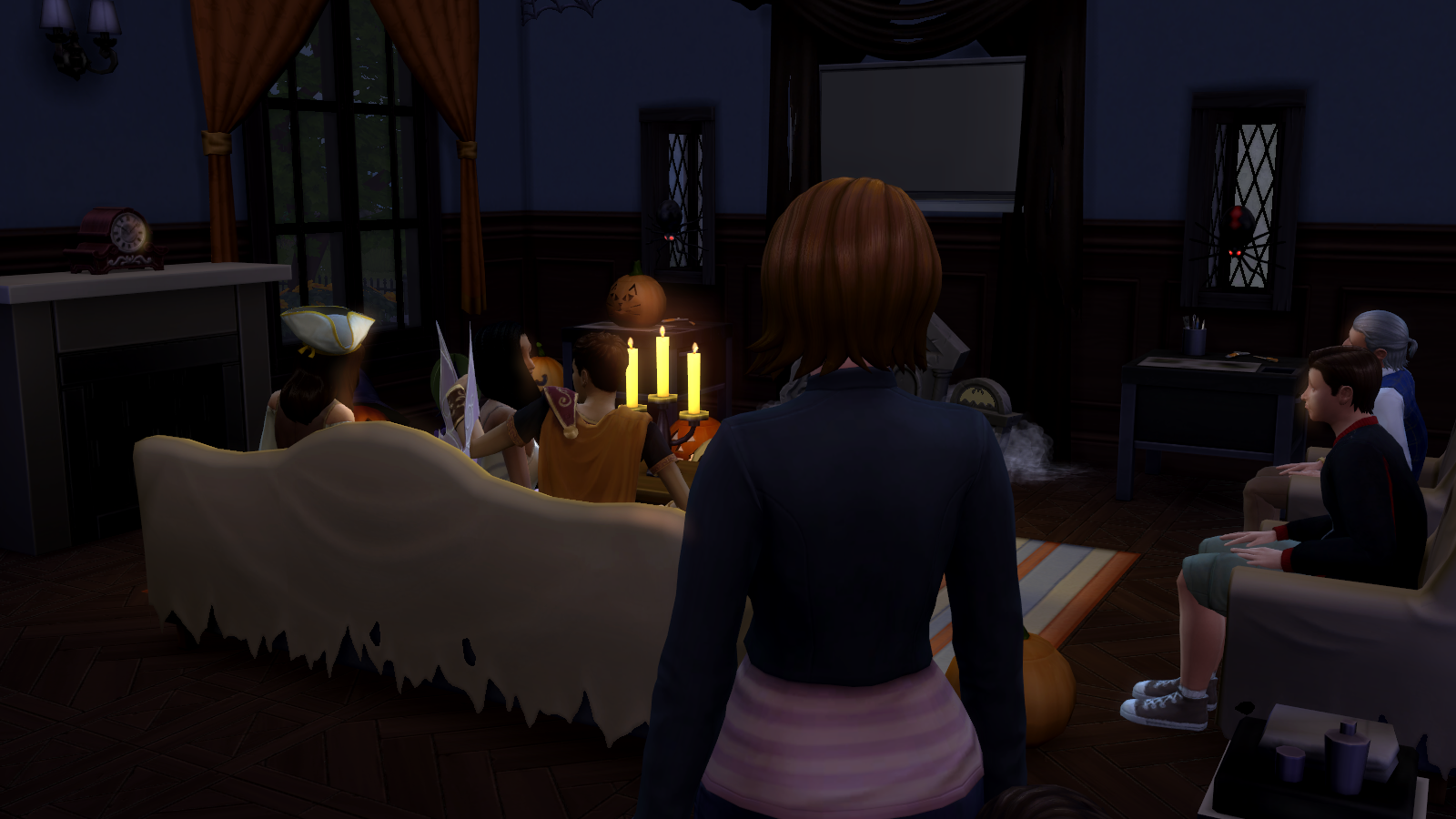 “Can we talk?” Maiike said, her voice barely audible over the howling wind outside.

He looked over his shoulder at her, eyes narrowed. “If you want to talk, murderer, you come over here where we can all see you.”

Max stepped out from behind her. “You might want to rethink that.”

“I’ve got nothing to hide,” Sergio replied. Maiike noticed the way his fingers clenched on the material of the sofa as he spoke, and the wide smile on his face conflicted with the way he couldn’t hold her gaze. She stepped forward.

“Tell me, Sergio, exactly what you have been doing since you arrived here.” 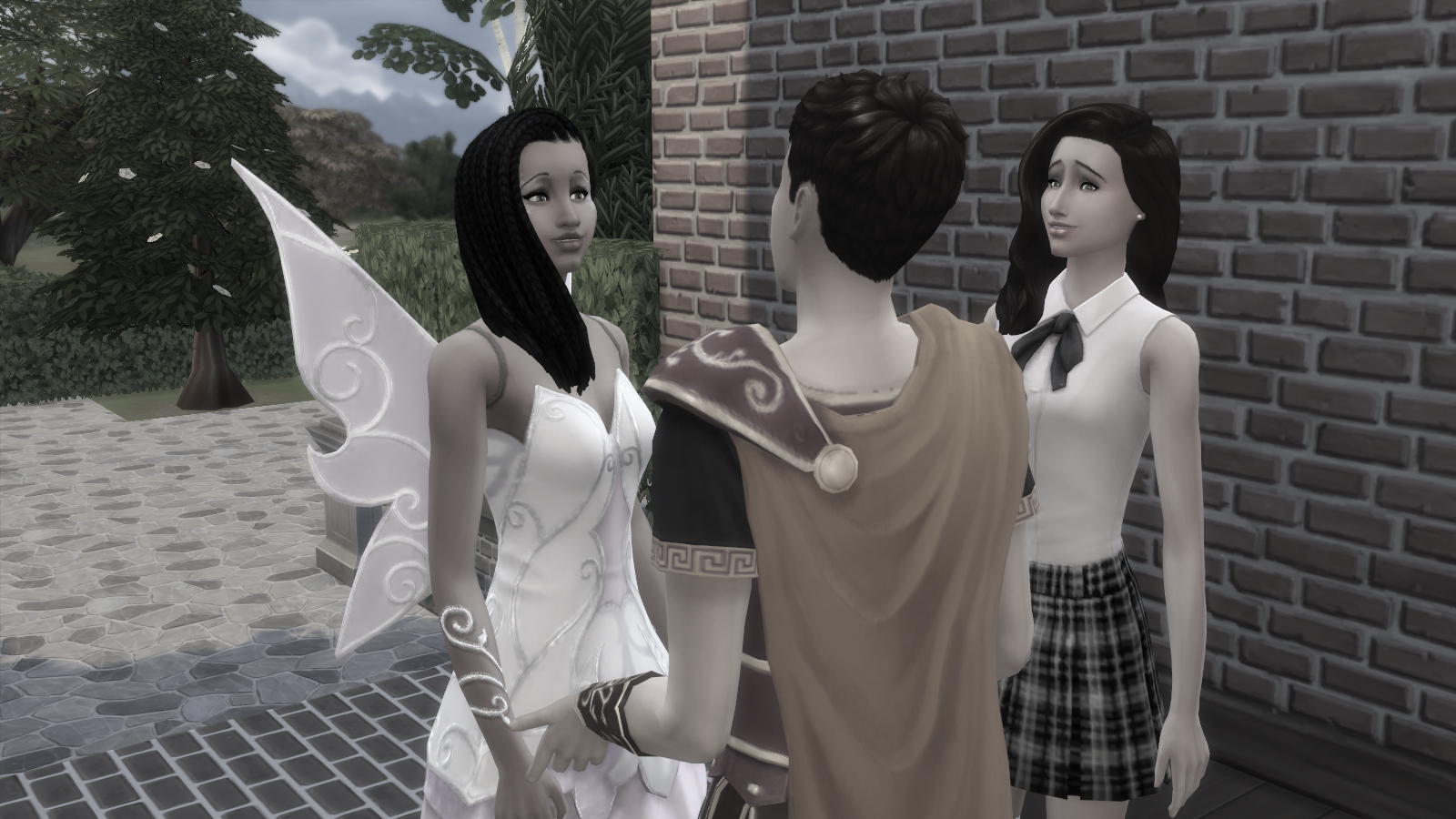 “Siobhan and I got here early. We had brought food with us, so we decided not to wait around. We rang the doorbell and Luna answered it. Then we heard shouting from upstairs and you…” he stopped to throw a pointed glare in Maiike’s direction, “… pushed past us.” 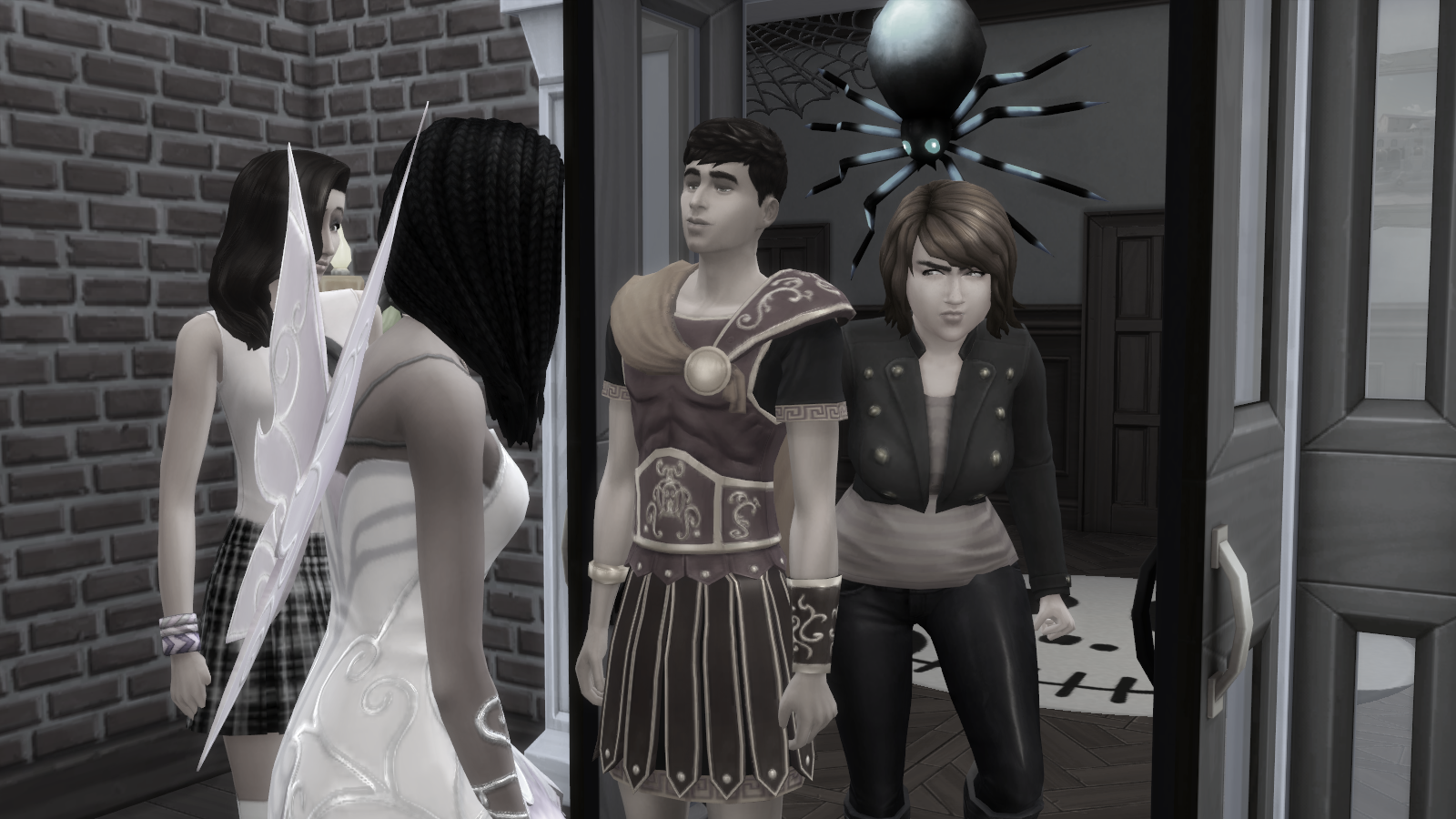 “We talked for a little longer, then I went upstairs to the bathroom, where I ended up getting trapped for…” he paused, thinking, “…about twenty minutes, I reckon.” 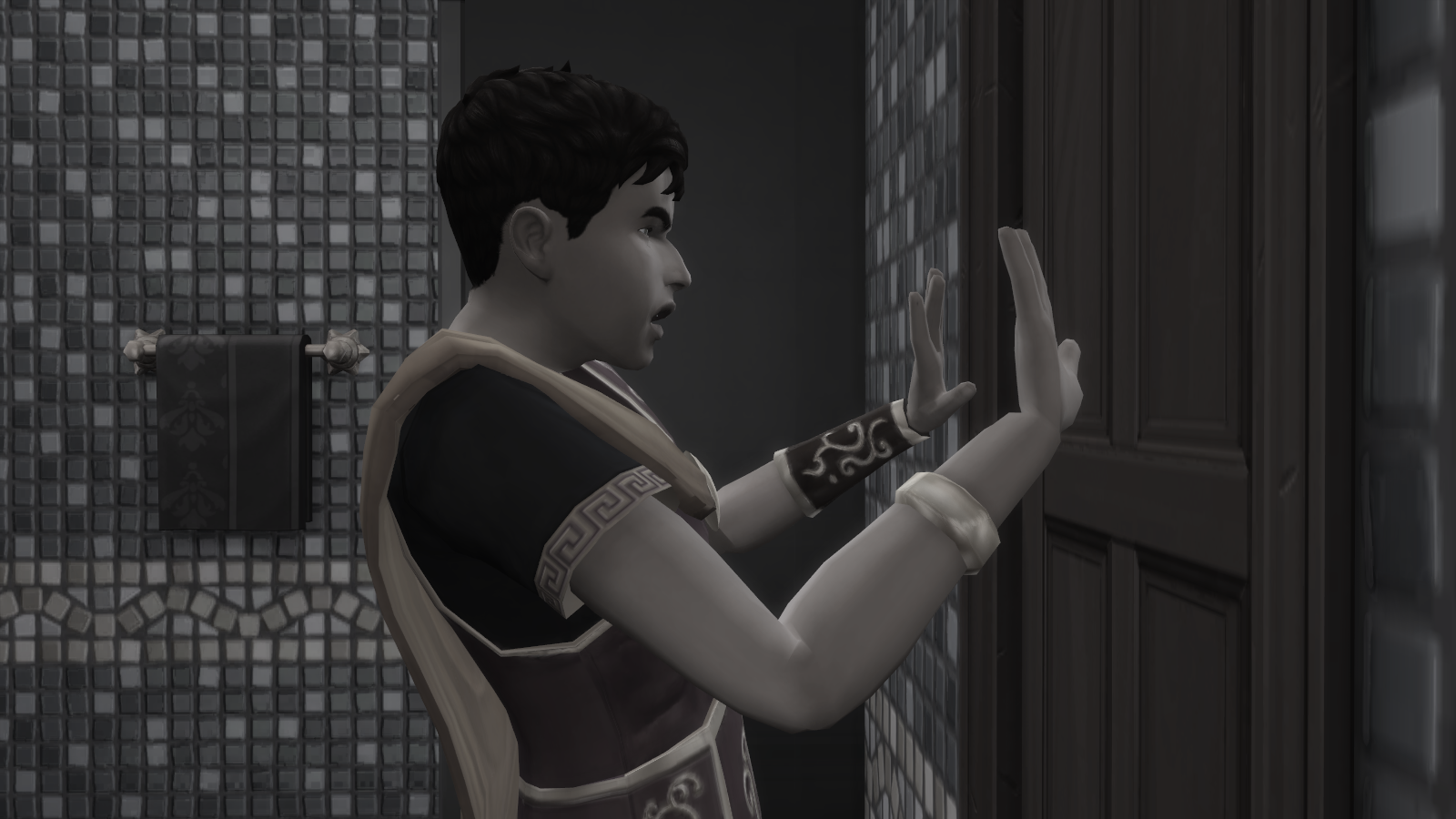 “I managed to get out in the end and went downstairs, meeting up with the girls again. We were watching a movie when the power went out. You screamed. Luna went up. She screamed, we ran upstairs and that’s where we found you. Covered in blood.”

“How did you get out?” Maiike asked.

“How did you get out of the bathroom?”

He looked down at the floor and scratched at his neck with one hand. “I dunno. I guess all my  pushing and banging and shaking must have fixed the door. It’s only wood, and I hit it pretty hard.”

Max narrowed his eyes and stepped forward. “Did anyone hear you?” 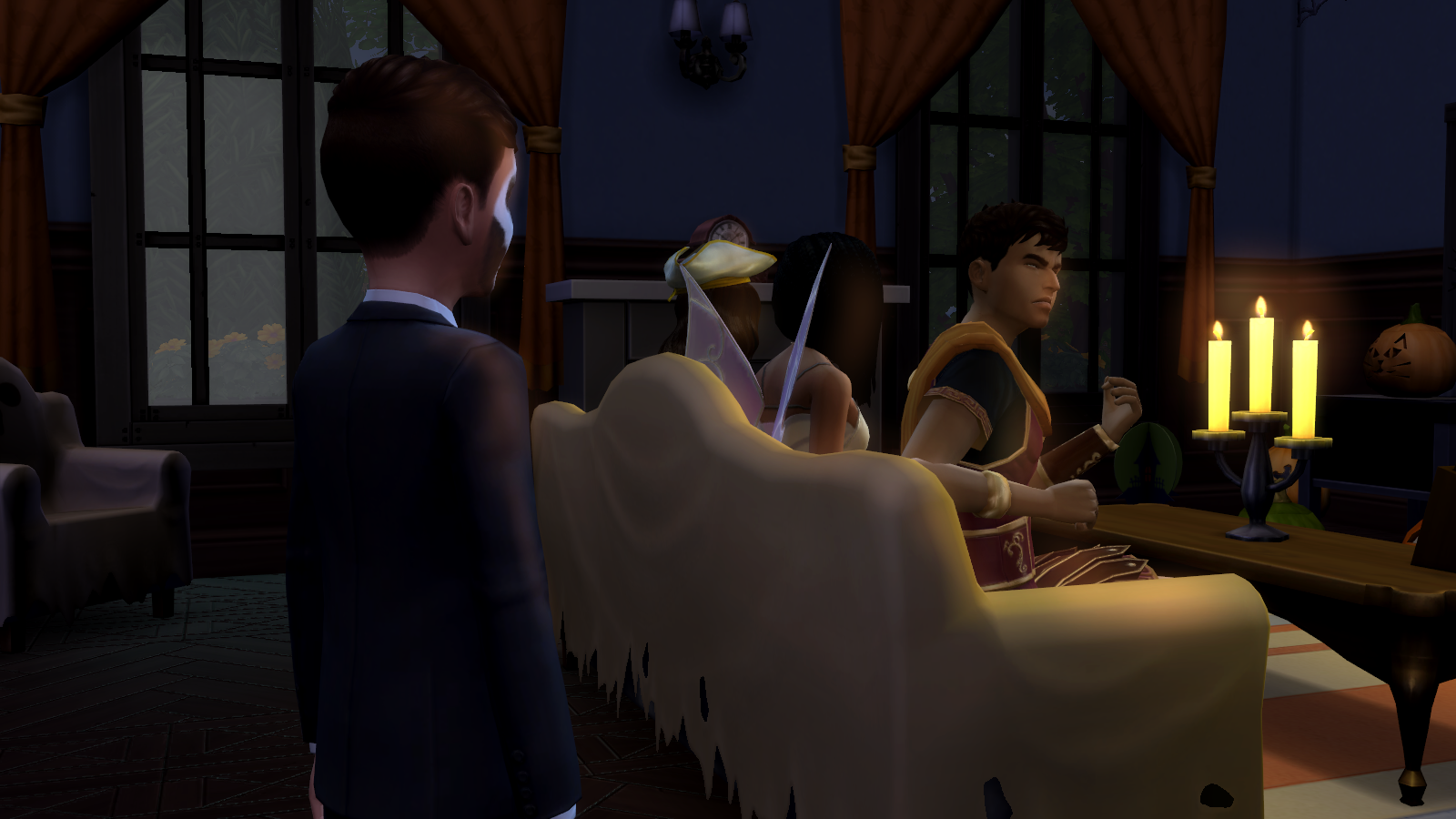 “Well, obviously not. If they had I wouldn’t have been stuck, would I?” he said, scorn dripping from each word.

“You’re lying,” Jacques said, heaving himself up out of the chair. “If you were trapped, then you were silent.” 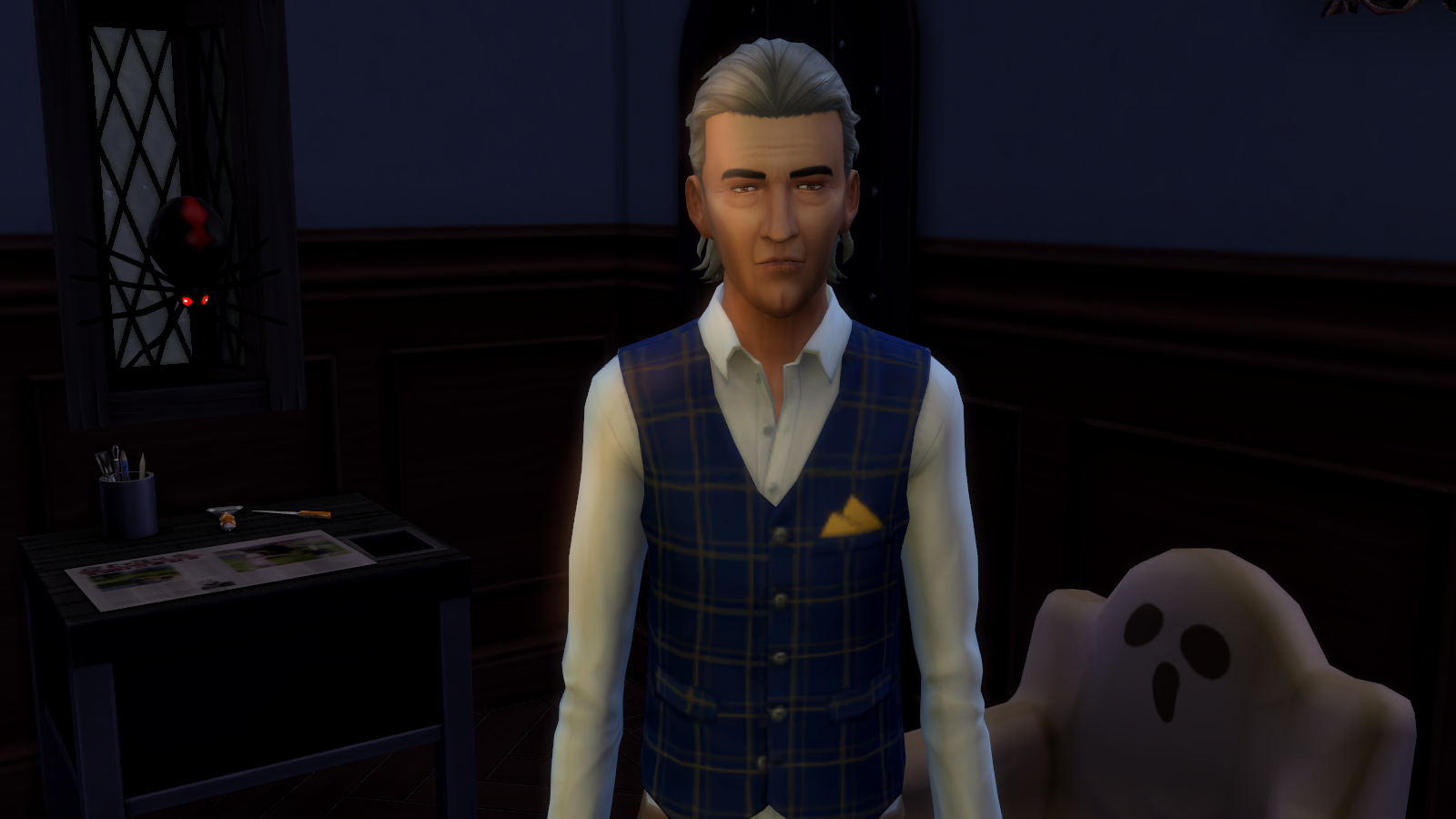 “What makes you say that?” Maiike asked, looking over at the old man. His spine was straight, and he looked Sergio dead in the eyes as he spoke once more.

“You couldn’t have been stuck in that bathroom. It’s an en-suite that is connected to my bedchamber. Had you been trying to get out, as you claim, I would have heard you. I was right outside the door.”