In today’s Sims 4 Cats & Dogs Create-a-Pet Live Stream, SimGurus answered questions regarding Pets in the game. Note that this live stream was only focused on Create-a-Pet, and they will be live streaming gameplay and buy/build mode in two weeks. To see the upcoming stream schedule, see this post here.

• Cats who have the “Fluffy Trait” will hack up hairballs more often. 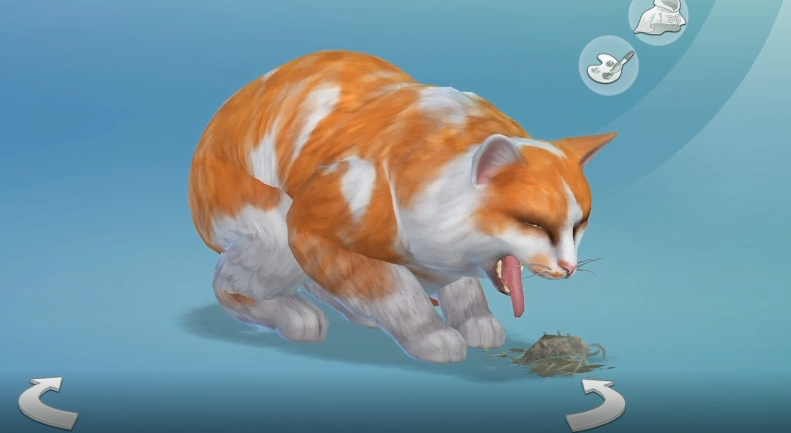 • You can use the search function in Create-a-Pet to search for breeds to create, and also use it to bring up different breeds in the Breed Mixer. You will also be able to search by filters like Herding, Hound, Sporting, Terrier, Toy, Working, and Non Sporting.

• Pre-made Cats & Dogs in the breed bin will have certain traits already assigned to them based on their breed type, but you can always remove and add traits.

• There is a kitten version of the Raccoon available in CAP. Raccoons are automatically assigned the “Territorial and Mischievous Traits”. The only difference between cats and raccoons is their head shape and the special voice the have.

• Pets will have both direct and detailed manipulation with regard to their face and bodies. You will also be able to directly manipulate their eye balls (cross-eyed for example).

• There are many ear, fur, and tail options available so you can customize your pets.

• The expansion pack comes with a simified version of a Roomba to clean up things like poo, throw up, and hair, around the home. To bring in a bit of fun to the game with the automatic vacuum, the team added the ability for Cats to ride on it. If you own The Sims 4 Parenthood Pack, the Roomba helps clean up the messes of your children as well.

However, cats who wear a “shark hat” while riding the automatic vacuum will “break the game” in the most amazing way. The simified Roomba and the cat interaction was most likely inspired by a viral video released some years ago. 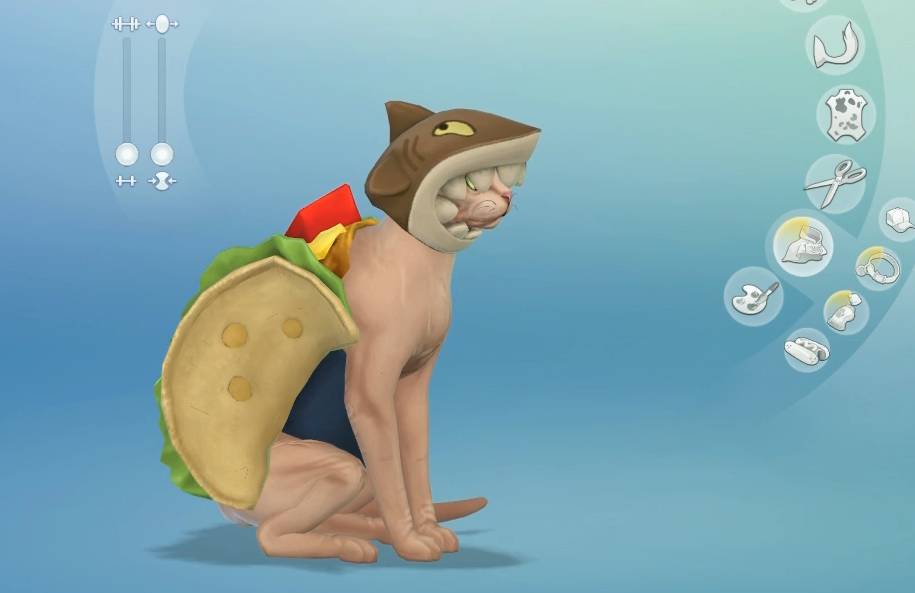 • The Sims team decided to add poses to CAP so that players can paint and customize pets at all angles with ease.

• You will be able to randomize breeds with the breed mixer and change the name of the breed in the upper left hand side of the Pet’s details.

• Players can randomize Pets just like Sims, and a filter is included to help you narrow down the specifics of what you want to randomize. 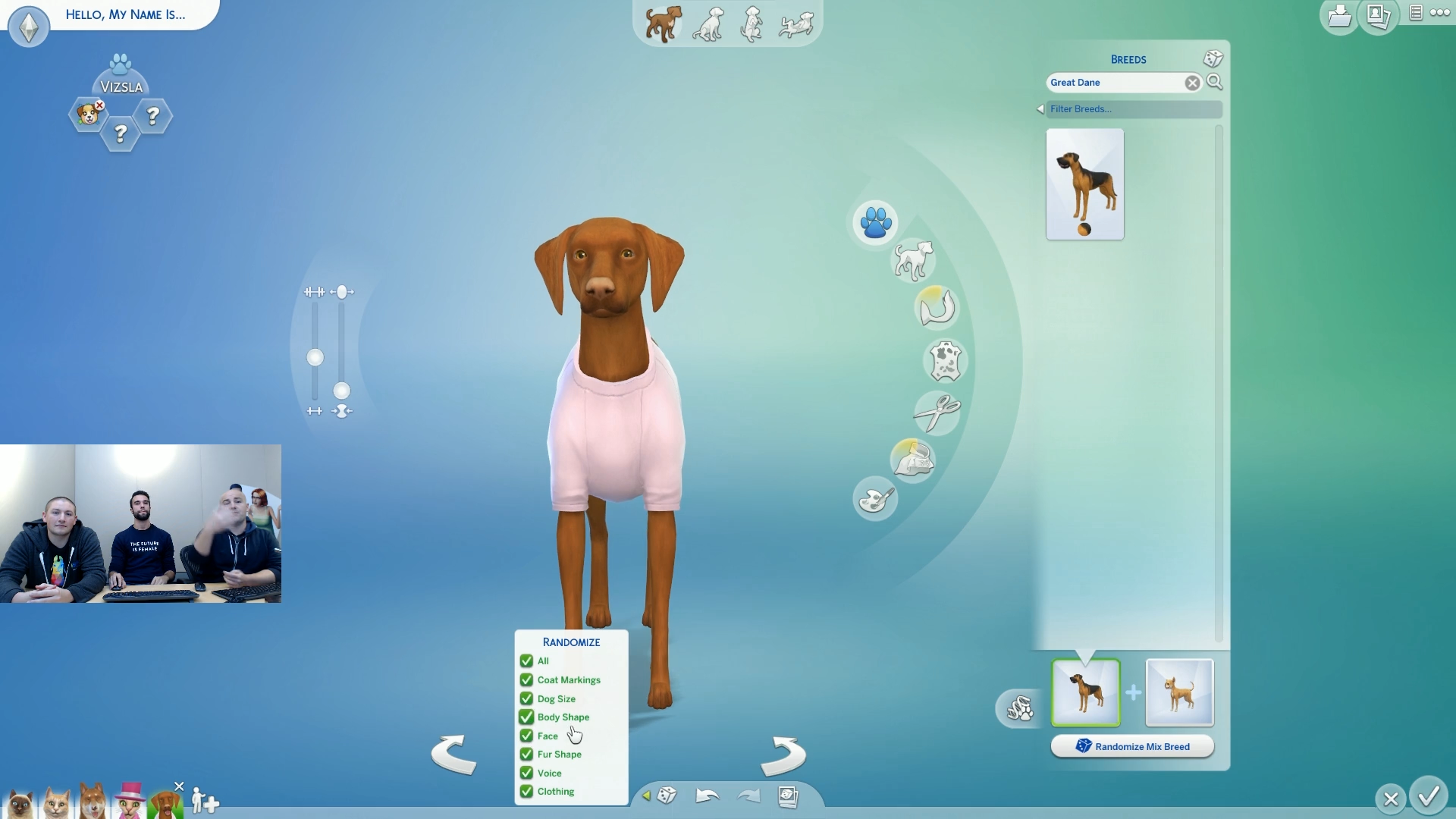 • Through testing, the team found that the wagging short tails for dogs were a bit annoying to customize and manipulate in CAP when animated, so they don’t move in CAP. They do, however, move and wag in live mode.

• If you do not want to go crazy with Pet coast and use all the different stamps, stencils, and painting tools, you can just change the color/pattern of different layers of fur instead. Additionally, you can also use the pre-made breed coats (little circles under a breed) to pick and choose different colors of the breed. 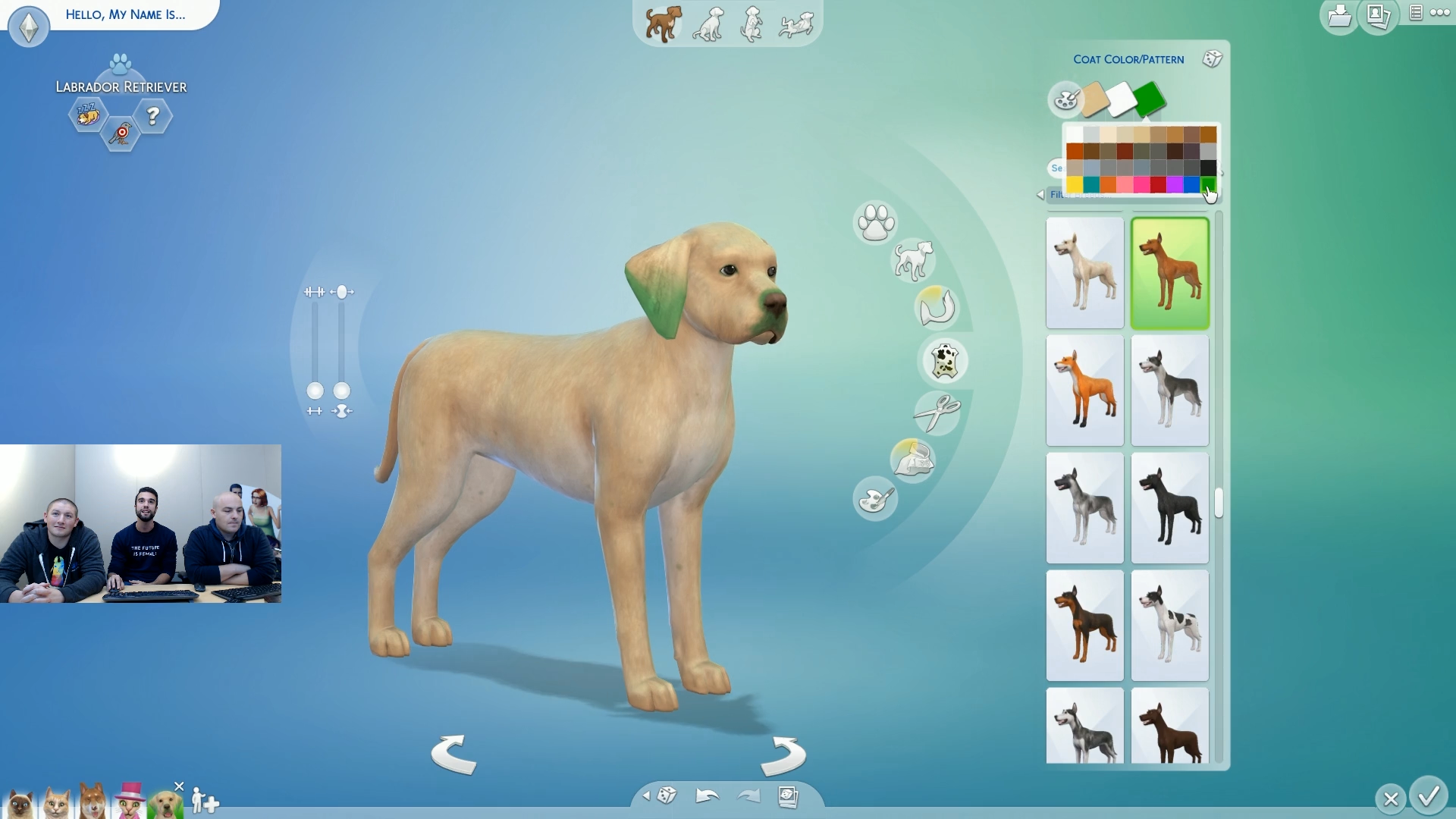 • When creating and customizing pets you can use the paint tools provided to paint individual areas of a pet, or use the “mirroring” tool to apply the same customization to both sides of the body, face, eyes, etc.

• “Hold and drag” to continuously paint or apply stamps/paint design is available. The tool will automatically rotate the design so it has a pattern as you drag and hold.

• There are 37 different paint brush designs to use.

• There are 53 different stamp designs you can use.

• There are at least 15 different stencil types.

• Stencils allow you to place a template onto a pet and use it as guidance to paint between the lines. You can also use the mirror tool on this as well to create the same effects in each section of the stencil on both sides. The stencil creates a “pulsating effect” so you can easily see where you can paint. This allows for custom painting that doesn’t require you to have the painting skills of an artist. 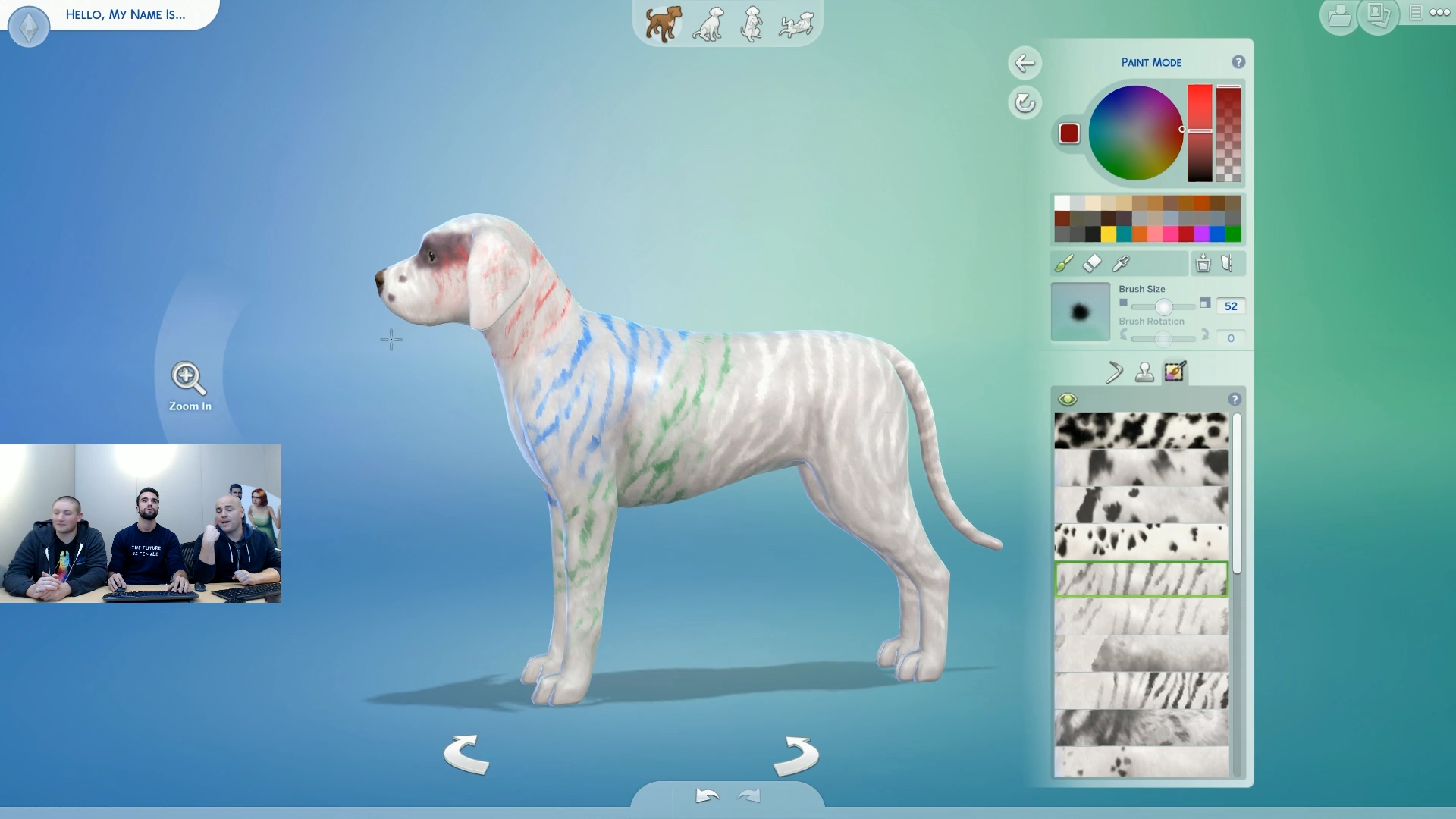 • The Detailed Paint mode allows you to paint the inside of pet ears, around the eyes, nose, the body, and also their paws pads. (Or toe beans as I like to call them) 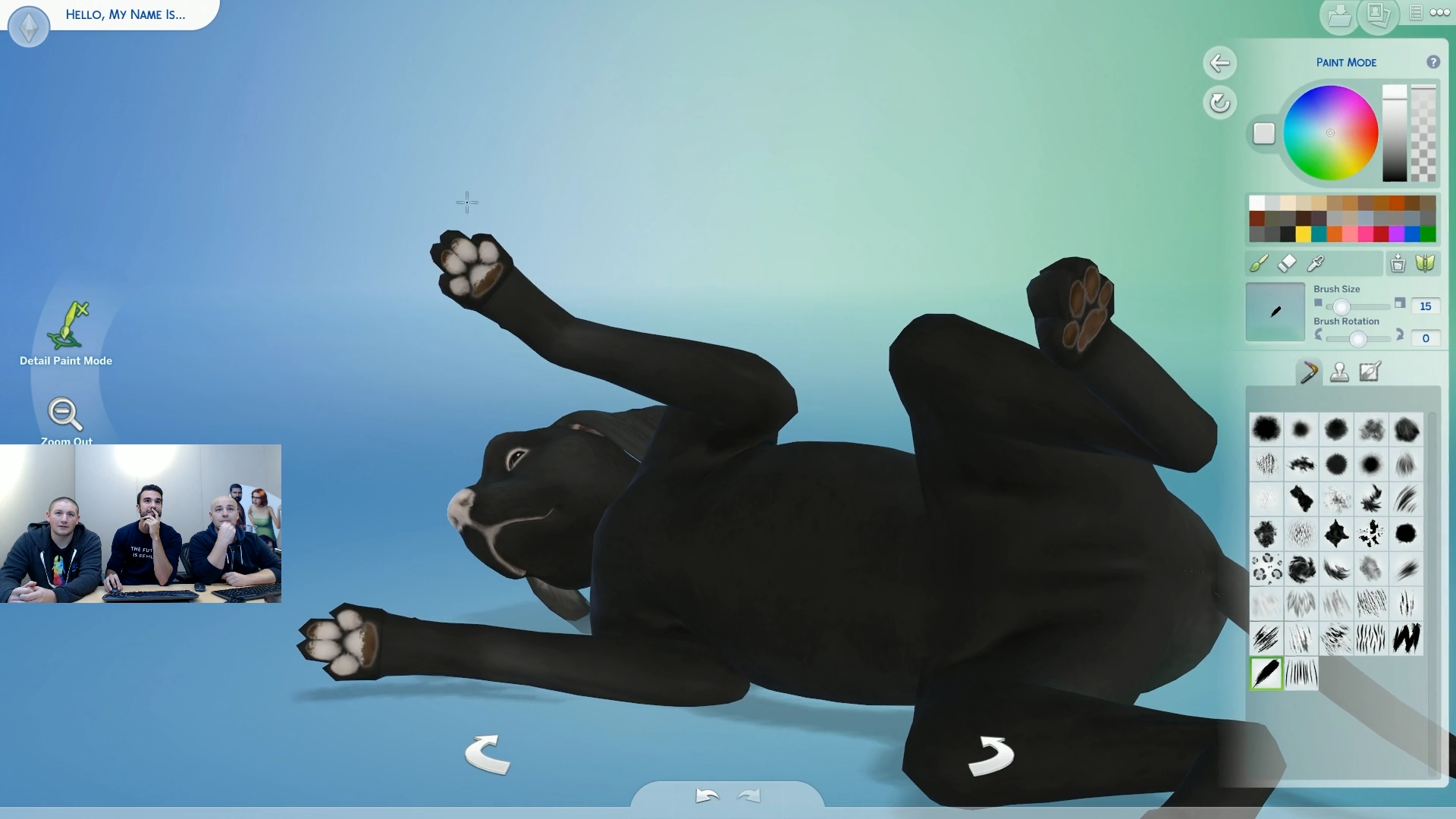 • Any customization or painting that you do to pets in CAP will stay with them if you decide to switch their age to a puppy/dog or kitten/cat. You will not lose the customization just because you decided to change their age.

• You can select whether or not Pets can reproduce right in Create-a-Pet. Use the ellipses under the pet gender to bring up this option. Select either “Natural” or “Fixed”. 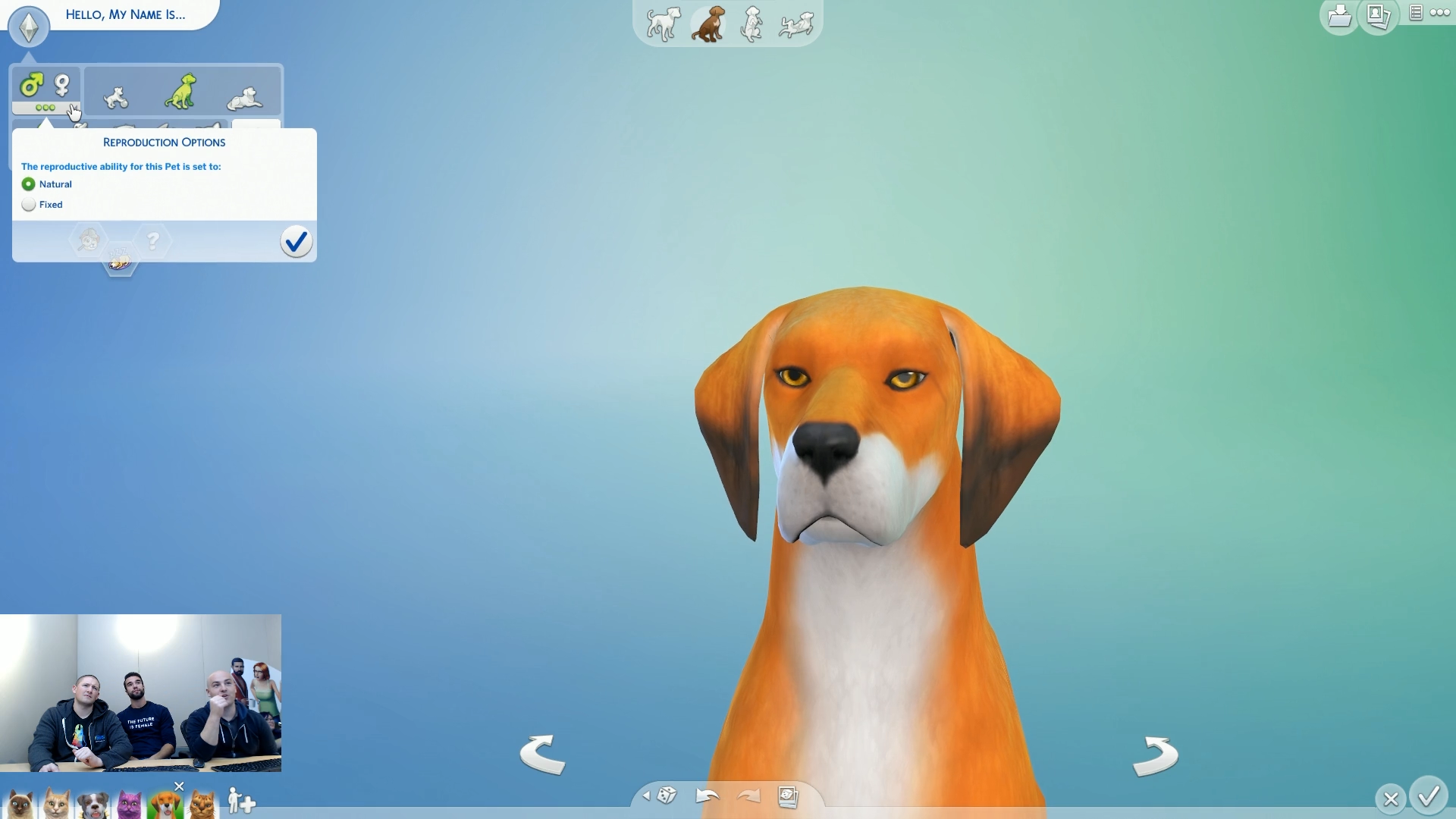 • There are three age groups for pets. Young, Adult and Elder.

• The shadow that is seen behind certain dogs in CAP allows you to visually know whether or not a dog is considered “large” or small”.

• Gurus showed off the Baby Fox. 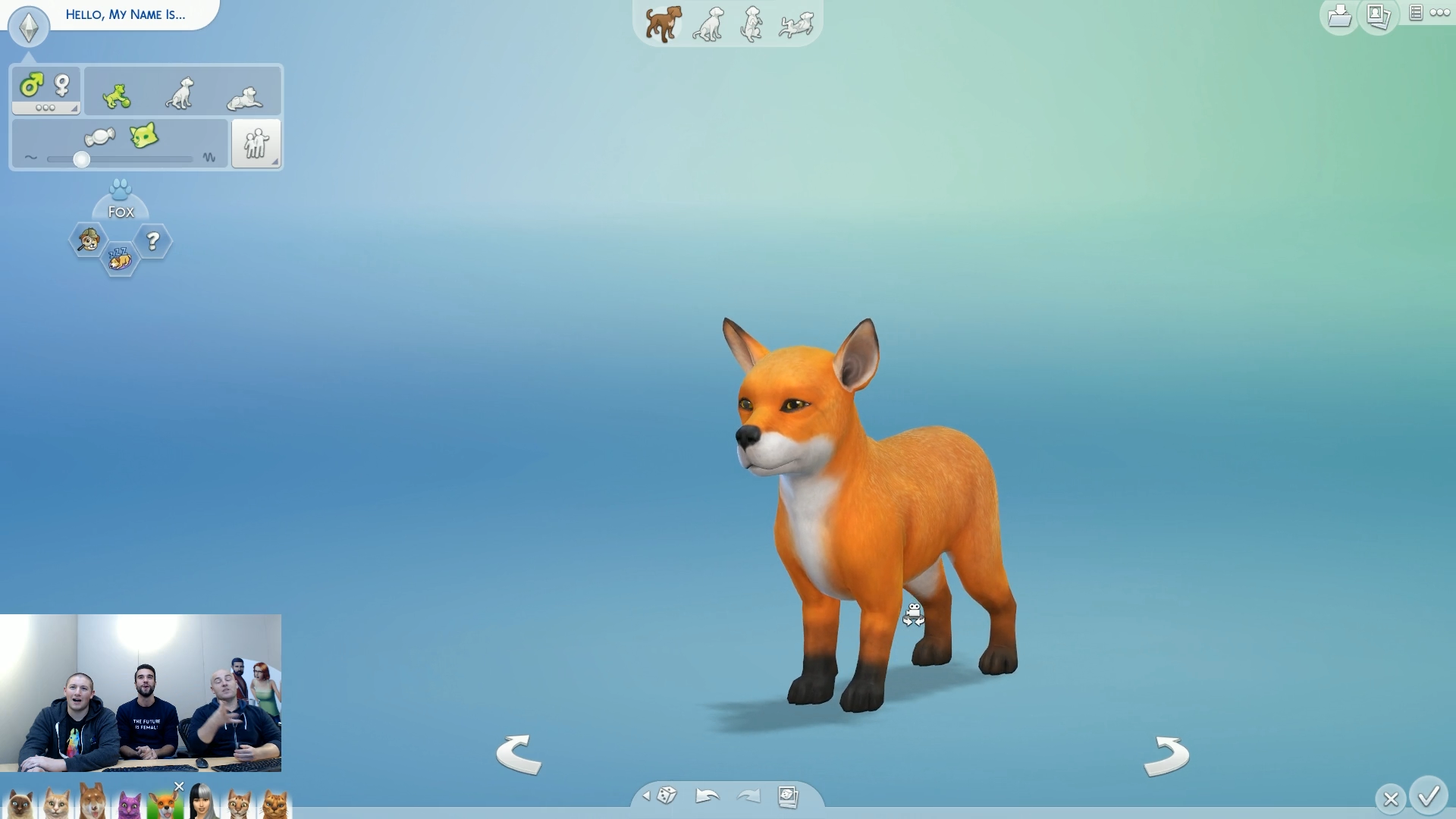 • Pets can be acquired and added to your family by making them in Create-a-Pet, adopting a stray in the world (high enough relationship required), adopt via the adoption services, by allowing pets to breed in game,

• There are a ton of different illness dogs can get.

• Pets do not have careers.

• Pets do not have unique walk styles. The animation team did give puppies and kittens unique walks compared to their adult counterparts. However, they will have different walk styles depending on their emotions.

• When pets are pregnant you will visibly see that they are pregnant, and be able to track their trimesters just as you do Sims. The amount of time it takes for pets to give birth is less than that of an adult Sim.

• There is a new Lot Trait called “Breeding Ground” that will increase the chance of Pets having 2 or 3 babies in their litter. There are also additional lot traits that they will talk about during a future stream.

• There are new clothing options for Pets and Sims.

• The game does not add clothing for Kittens and Puppies.

• There is not a slider for fur, but just a variation of fur types that apply to the entire body. You cannot have a more furry upper body and less furry lower body.

• The Sims 4 Cats & Dogs has been in development for years.

• Once again, you cannot control Pets.

• Small Pets and Horses were not included this time around due to the feedback the team received from the community. In order to focus on adding more depth and content to the game, the team decided to focus exclusively on the more common household pets.

• Grant spoke about an interaction he saw a few days ago where his Sim was eating food and the dog came up to the Sim and begged for food and the Sim scolded the dog for it.

• Cats can jump onto and dogs can lean up onto counters and eat a Sim’s food.

• Sims who leave behind ingredients before they begin cooking might have the ingredients eaten by pets.

•  The life span of kittens and puppies as stated by Grant is “a couple days”.

• SimGuruRomeo stated that the “normal life span” of cats and dogs is about 3-4 Sim weeks. If you start with puppies or kittens it expands to 5-6 weeks.

• There is a “brush” interaction in game for some dogs.

• There is training for pets. Potty Training is an example.

• Pets are fully autonomous and driven by their traits and training.

• Training works similar to that of character values in Parenthood. As you scold or encourage them for their actions it shapes their behavior

• Training has two systems: Training & Discipline and Misbehavior. Training dogs to go to the bathroom and not eat human food, but training them to sit and roll over and fetch are part of the training skill.

• If you use the retail mechanism of Get To Work, you will be able to sell items that are pet related at the store. You will not be able to sell the actual pets in this manner though.

• Service Dogs are not included in the game.

• Pets will help satisfy a Sim’s social and fun motives. An example they gave was a Sim comes home from work stressed out and they give their pet a hug to be immediately relieved of the stress and be happy.

• The new roof types that SimGuruHouts teased a few months back will be coming for FREE in the Pets game update.

• It is not required that you add a collar in CAP to walk Dogs. As a reminder, you cannot walk Cats.

• Cats will jump on almost everything in the game. If Sims are cooking dinner they will jump on counters and the fridge to look at the food.

• Sims will not be “allergic” to Pets.

• Ghost dogs who “howl” have a spookier voice sound that echoes.

• A question was asked about expansions the Gurus would like to make, and SimGuruGrant responded by saying that “he thinks they’re actually going to make the expansion he wants to make” (therefore he was unable to speak about it) and proceeded to mention the post-apocalyptic gameplay mentioned in an interview a few weeks back.

• Pets will only die of old age, so you cannot have ghost puppies and kittens. Pets cannot die in fires either.

• There is a townie cat named Mayor Whiskers.

• Brindleton Bay will consist of 4 neighborhoods. Three of them are “full” neighborhoods, and the 4th is a “special lot” that Sims can visit. Sable Square is the name of one of the neighborhoods.

• Pets can enter most lots in the game. They will not be able to enter Sixam.

• Pets in the game were voiced by “real people” rather than animals sounds. They tested with real pets, like SimGuruGrant’s dog “Peaches”, but because they can’t really control the emotional range of pets, they decided to use voice actors.

• SimGuruGrant stated we do not have burglars in the game because “we don’t like crime”. SimGuruJM followed up with “that was the meeting we had”. SimGuruDrake then stated on Twitter it was a joke, but there was a rumor about this that popped up on the forums.

• Sims will have a “Training Skill” (?) and that will help their dogs level up in agility.

• Pets cannot be aged up manually. More information about that here.

• Pets can be shared in the gallery as a household or individually.

• There are no “Pet Contests”.

• There will be plenty of pets roaming around town. Sims will also bring Pets out into the town with them.

• Cats, Small Dogs, and Puppies can be carrying by Sims.

• Many of the dogs can sleep on Sim beds.

• Pets can run away from home and they can also return. When they run away or go missing, Sims can post an alert to (social media?) from their phone.

• Pets in your household can mate with townie dogs or strays as long as they have a prior relationship. Sims can also direct their pets to breed with random pets.

• Small and Large dogs can breed.

• All pets can fight with each other.

• There aren’t any Dog Houses, but there are Cat Trees.

• Pets can randomly get pregnant if they are not spayed/neutered. They might also return home pregnant after running away.

• There is a place in the world that will have tombstones from Pets where Ghost pets come out during night. There isn’t a dedicated cemetery though.

• If you lock the doors in your home Pets cannot go through them, but a Cat on the Roomba will be able to get through locked doors.

• Lastly, here is SimGuruRomeo’s attempt at the Cheshire Cat. 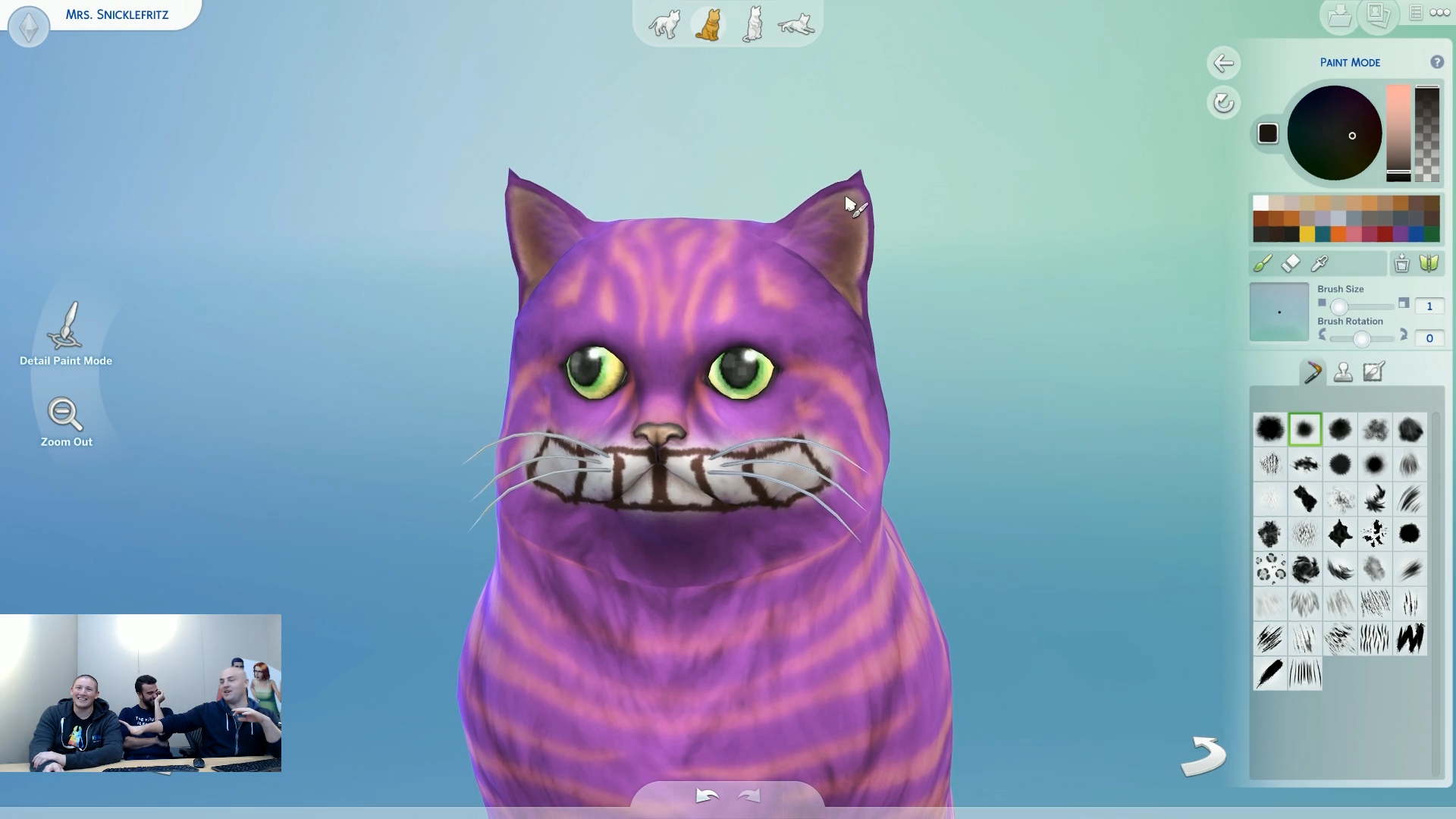