Sims 4 Seasons Community Blog: A Day in the Life of The Climates | SimsVIP

The Sims team has released a new Sims 4 Seasons blog!

Hello, Simmers! When we last left the Climate family, well, nothing had happened yet. We just introduced them and left you hanging, which is a pretty raw deal, don’t you think? So, without further ado, we present: 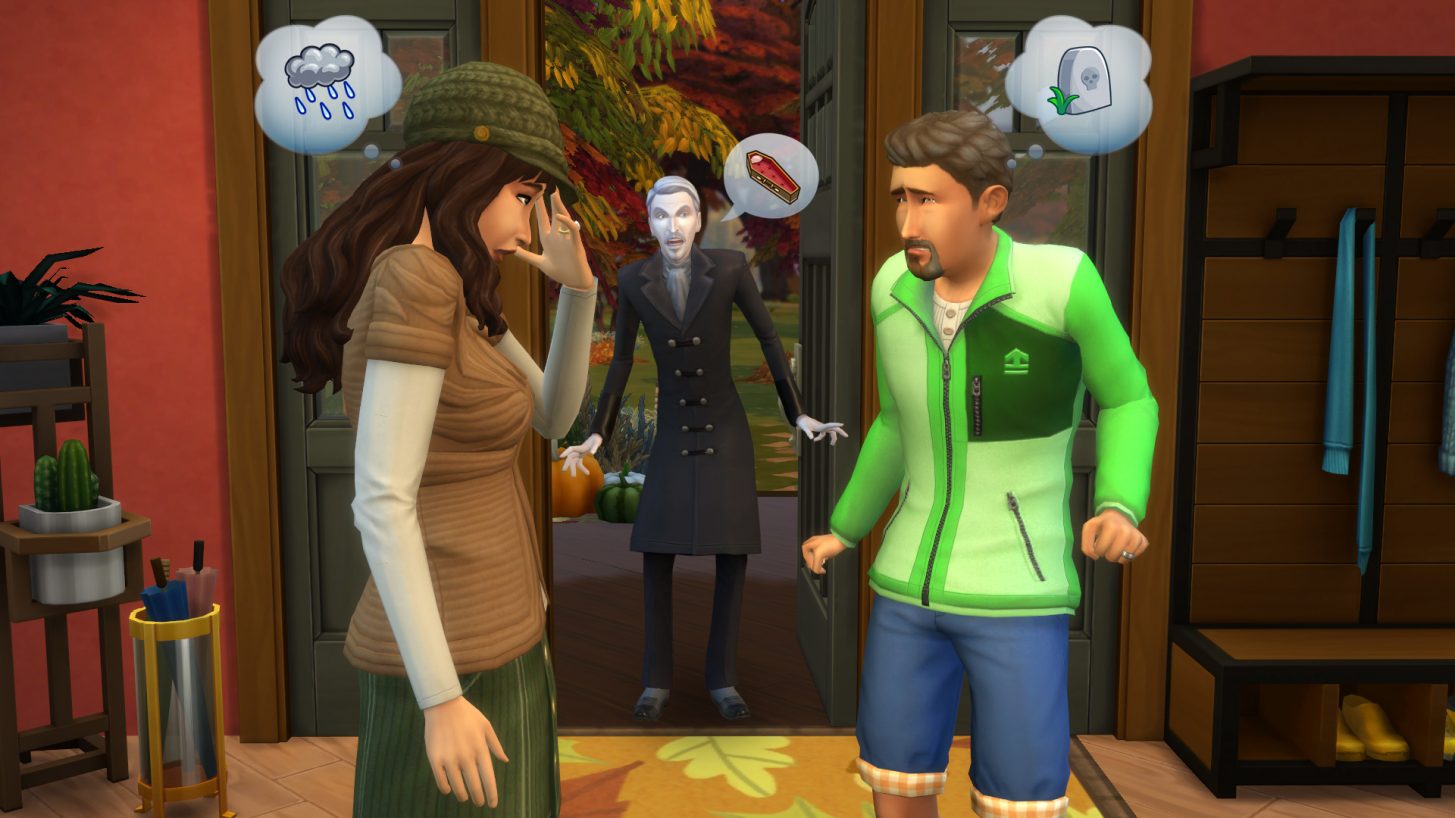 One week until Harvestfest . . .

Janine has too much on her proverbial plate. With Harvestfest coming up, the amount of time left to properly give thanks is rapidly dwindling. The family took a big vacation over the summer and had plenty of frivolous fun, but now her to-do list is longer than a bestselling novel.

She sips her cup of steaming cocoa. The chill in the air means it’s time for her favorite treat. The rich cocoa scent fills the room. It’s her favorite time of year.

Top of her list? Extend an invitation to her husband Arthur’s cousin, Vladislaus Straud, to visit. The last time they spoke, something felt . . . off. So, after weeks of not answering his calls, Janine finally picks up the phone and asks him to visit during Harvestfest. She could use an extra pair of hands, anyway. The turkey won’t cook itself.

Dark clouds roll in. How odd. It’s been sunny all day.

“Arthur, can you rake the leaves outside before the downpour arrives?” Janine asks.

Her sweet, silly husband breaks out of his experimental cooking regimen in the kitchen.

Arthur calls down Summer who stomps her feet, of course. Typical teenager. The two of them get started while Janine continues to chip away at her to-do list.

Things will come to a head on Harvest Day. No doubt about it. There’s the grand meal, the family traditions, and Vlad. Ugh, Vlad. A perennial bachelor, he asked Janine and Arthur to set him up with “a healthy female” with “good portions,” whatever that means. This seems oddly specific. What are those Forgotten Hollow locals into, anyway?

Janine marks a few days on the calendar:

“Hey Arthur, you gonna pick up those leaves or just keep throwing them around the yard?”

She smiles at her now-soaked husband. So much to do.

“Oh, it is just so nice to have you here, Vlad,” Janine says to her cousin (by marriage).

“Scale back the sarcasm just a smidge, dear,” Arthur whispers in her ear.

“Yes, yes,” Vlad says. “About my date. You have procured a tasty morsel of a female?”

“We don’t call them tasty morsels here in Willow Creek,” Janine corrects. “But, yes. My co-worker Beth will be joining us at the restaurant.”

Arthur coughs awkwardly and both he and Janine quietly leave the room. Summer pulls her mom aside and asks what is going on, but Janine ends the topic and tells her to get ready to leave for dinner.

Janine, Arthur, Summer, and Vlad meet Beth waiting in the restaurant. Vlad completely ignores the menu to dive straight into conversation with Beth.

“Isn’t it odd how specific he is getting about her diet?” Janine asks Arthur. “Who cares whether she eats only organic foods?”

Janine ribs her husband, causing him to cough on his food. “He just asked her about her blood type. That is weird!”

“Didn’t he say he was interested in medical school?” Arthur asks, the pitch of his voice indicating his growing suspicion.

Dinner comes and goes without major incident, though Vlad merely partakes in a cocktail and adds the odd comment that he’ll “eat later.”

Arthur pays the bill and everyone heads for the door. Beth quickly adds that she’d love to attend the Harvest Day grand meal. A little shocked at her self-invitation, Janine, Arthur, and Summer nod and shrug.

“Sure,” Janine offers. “What’s the worst that could happen?”

At last, the big day is here, in more ways than one. Summer, recognizing how tired her mom is, and how annoying it is having Vlad around, even pitches in to set the table for the grand meal. As the smell of fresh-baked, roasted, and sautéed delights fills the dining room, the doorbell rings.

In two seconds flat, Vlad arrives at the door. “I’ll answer it,” he shouts to the family, who have stopped trying to understand his odd behavior.

“We know,” the family responds in unison.

Before Janine can shout that the grand meal is ready to be eaten grandly, he disappears outside with his O-positive belle.

“He’s never allowed back,” Janine says quietly while she watches the two lovebirds in her front yard.

“I’m with you,” agrees Arthur.

“I’m glad you took care of those leaves. The yard looks really nice.”

But, just as soon as she says it, she regrets it. Vlad and Beth disappeared with a frolic into the pile of leaves, and ruined everyone else’s appetite.

“What’s going on outside?” Summer asks.

“Nothing!” shout her parents in unison.

At the table, Janine, Arthur, and Summer begin the scrumptious meal.

“Summer, we want to tell you something,” begins Janine. “We want you to know how thankful we are for you. For this family. But, we have a surprise.”

“No,” respond her parents in unison.

“But, someone else is,” Janine says. “You see, you’re getting a baby brother. I’m pregnant.”

For once, Summer doesn’t have a witty quip or a snarky retort. She stops, thinking about her mom’s words. She looks at her parents’ smiling faces. The beauty of the moment.

“What did I miss?” Vlad asks, barging in.

“NOTHING,” they all respond to him. They smile at their secret, even though it won’t be a secret for long.

“Uh huh,” responds Arthur. “Would you like some turkey, Vlad?”

This installment of the Climates is brought to you by The Sims 4 Seasons Expansion Pack,* which releases on June 22, 2018 for PC and Mac. This story also features content from The Sims 4, The Sims 4 Vampires,* The Sims™ 4 Parenthood,* and The Sims 4 Dine Out,* all available on PC and Mac via Origin now.