Michael True, 3D Artist to The Sims 4, has shared several articles on the various worlds and objects he worked on for the game. Among the various concept art and backstories is some early production of a “desert air base” from The Sims 4 Get to Work.

The Sims 4 Base Game
Fresh from the Sims3 Store I was asked to join the Sims4 team as the primary lot constructor. It was a reprise of my initial role on Sims 3 and one I knew well. Although I did not get to own a neighborhood of my own I constructed all of the lots that the game was shipped with…and many more besides. Most of the gameplay in the Sims occurs on the lots so it requires interfacing with design and gameplay as well as art and engineering and is perhaps the most player facing discipline. 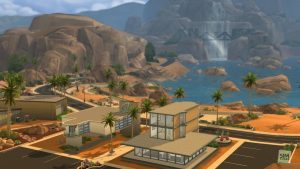 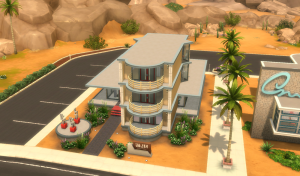 Sims 4 Outdoor Retreat, Hermit Neighborhood
For my first world on the Sims4 franchise I was able to be creative and create a secret neighborhood for players inhabited by a reclusive gardener. I was given a lot of freedom on this world and I was very pleased by the way it turned out. As on most sim projects I also did some world object modeling and I was the primary lot builder on this project.

Sims 4 Get to Work, Science Career Neighborhood
The science career neighborhood for the first full Sims 4 expansion pack was challenging as the concept evolved quite a bit. The final version was a science lab, but I have included a picture of the desert air base it has been at one point in production.

Sims 4 Get Together, Windenburg
For Sims4 Get Together I was able to express my love of Europe through the old town of Windenburg. Done on a tight schedule this large world with seven lots was particularly challenging due to time and performance constraints. This was also the first world to be done mostly through road and surface modeling with little terrain editing so I needed to work closely with engineers so that it would all work smoothly.

Sims 4 City Living, San Myshuno
On this Expansion pack I was responsible for the Arts Quarter neighborhood as well as providing additional modeling support and lot building. This neighborhood turned out to be huge. The apartments raised the players view point so we needed much more built out areas to avoid the user seeing the edge of the world. Although, the playable area was still compact. In addition festivals were added to the world play space so there was lots of interaction between world building, game play, and design.

Sims 4 Cats & Dogs, Brindleton Bay Brindleton Bay.
I worked primarily on the coastal neighborhood taking it from concept through completion. In addition I built out the lots and provided modeling support for several assets including the dogwood tree, the red oak and the distant trestle bridge. On this Expansion Pack I also was secondary and mentoring support to a contract artist for the island world, reworking the graveyard as needed and brought both worlds through performance and bug fixing. 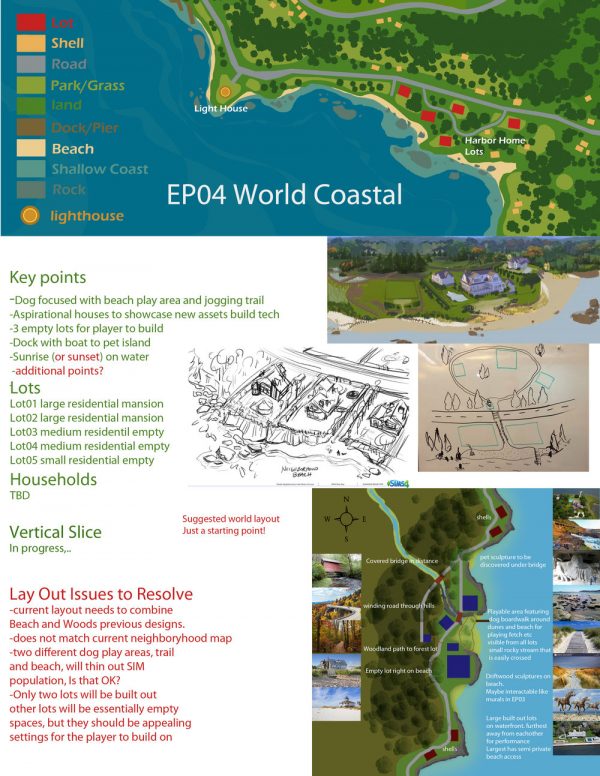