The Sims team has released an official blog for The Sims 4 Star Wars: Journey to Batuu.

In a galaxy far, far away, deep into the Outer Rim, the world of Batuu spins under its three suns, host to both the brave Resistance and nefarious First Order, with roguish scoundrels taking advantage of the chaos. How things unfold, though, is up to your Sims in The Sims™ 4 Star Wars™: Journey to Batuu Game Pack*, available on September 8!

Experience the Edge of the Galaxy

From the moment Sims arrive on Batuu, they’ll be surrounded by the sights, sounds, and smells of Star Wars™. Majestic petrified trees rise high over the settlements and ships pass overhead, engines whining. Black Spire Outpost hums with activity as alien locals and busy droids go about their days. Vendors serve up Ronto Wraps and Fried Endorian Tip-Yip to hungry Niktos and Rodians. Curious Abednedos, Mirialans, and Twi’leks browse the wares at Dok-Ondar’s Den of Antiquities. Sims might recognize a certain infamous ship, the Millennium Falcon™, or hope to escape the notice of patrolling stormtroopers. But once they arrive, they’ll never want to leave.

The tension between the factions on Batuu is evident. Stormtroopers patrol the streets, searching for evidence of the hidden Resistance, and rebels carry out secret plans from their mysterious bunker. Even the smugglers operate a lucrative business, staying neutral to take advantage of both the Resistance and the First Order. So, which will your Sim join?

DJ R-3X, the droid in charge of the music at Oga’s Cantina, is the best point of contact for learning about the different factions. At first, missions will be simple, sending your Sim off to rifle through supply crates or chase rumors about the growing Resistance presence. As a result of completing a mission, Sims collect rewards—and earn reputation points with the associated faction. Increase your Sim’s reputation to rise through the ranks, from sympathizer or supporter to sergeant of the Resistance or First Order. If galactic credits motivate your Sim more than ideals, the scoundrels are always looking for assistance—that’s just good business.

As your Sim’s reputation grows, it also affects the way locals react to them. A Sim highly regarded by the First Order will find it difficult to chat with Resistance supporters. Climbing the chain of command by completing missions also begins to introduce new faction contacts. Depending on the choice your Sim makes, they might encounter Vi Moradi running a mission, Rey practicing with her lightsaber, Kylo Ren losing his temper, or Hondo Ohnaka cheating at a game of sabacc. 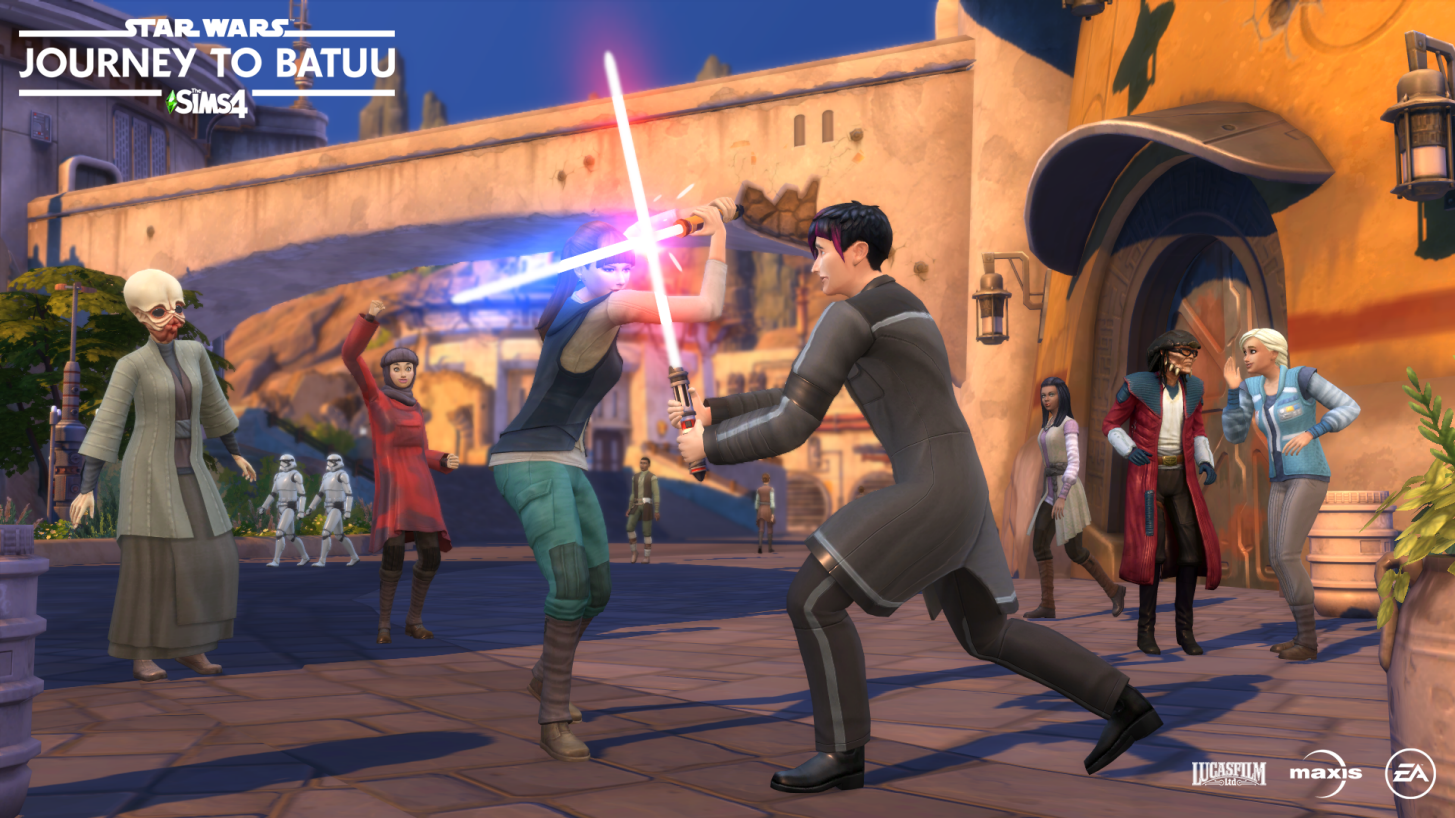 It wouldn’t be Star Wars™ without lightsabers and droids. On Batuu, Sims can find parts for their own lightsabers! Take a trip to Savi’s Workshop to see a few of the hilt and kyber crystal options, or complete missions to earn rare pieces as rewards. Try different crystals until you find the one that is right, and once it’s done, start training! Practicing with a lightsaber or sparring with other Sims builds the Fitness skill, too.

Need a friend on Batuu? Why not a droid?! Just collect scrap metal from scrap piles around Batuu and earn enough galactic credits, then purchase a droid from the Droid Depot, where they offer both R- and BB-series astromech droids. Once Sims have customized their droid, give it a name and watch it go! Your Sim’s new buddy will follow them everywhere on Batuu. Plus, droids are helpful on missions. They can use their scanners and electro-prods to assist Sims by searching crates, scrambling control panels, or distracting rival faction members. These are the droids you’re looking for!

When your Sim returns from Batuu, they won’t be coming back empty-handed. Enjoy Star Wars™ inspired updates in decor, home design, and even recipes. Whether Sims display the antiquities they collected on Batuu or revamp their style completely to imitate the dwellings of Black Spire Outpost, they don’t have to leave their Star Wars™ adventure behind. Invite neighbors over for a game of sabacc or a lightsaber sparring session whenever you like.

Plus, any droids ordered on Batuu return to the Sims world as well! Sure, droids might not go around zapping people in Willow Creek, but Sims can still build relationships with them and have fun driving them around with a datapad! 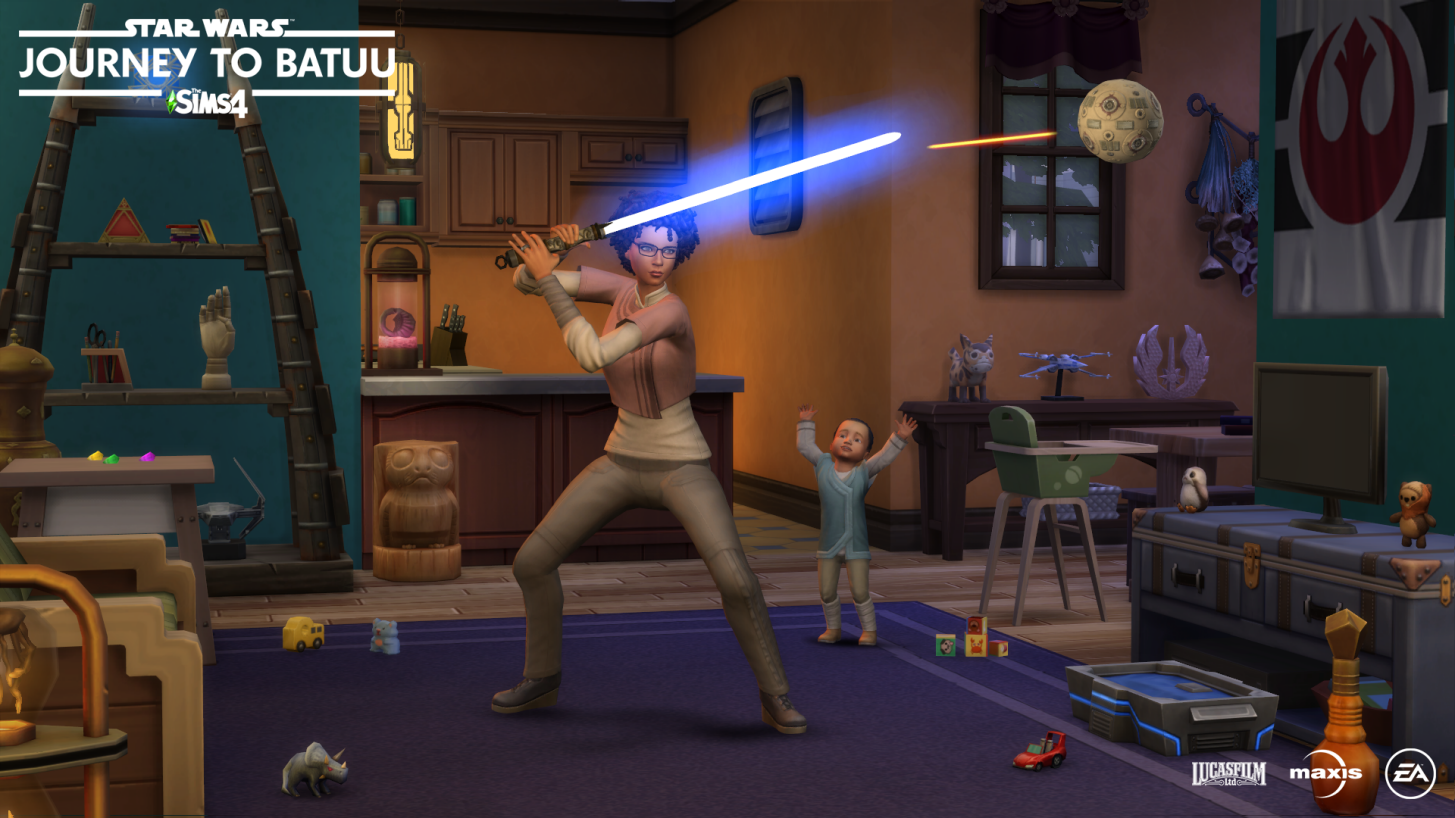 The Sims 4 Star Wars™: Journey to Batuu Game Pack arrives on September 8, 2020, at midnight in your region for Mac and PC and at 10 a.m. PT for Steam, Xbox One, and PlayStation®4!