Most sane, rational people would just take an existing build and add the new items on.

I built a farm.

I think we all can agree I am neither sane nor rational.

Create A Sim and Build/Buy Totals

The first picture is the Buy Mode items without the coop, the second is one with. The walls are intentionally left unadorned and the floor as grass so they can be clearly seen.

The farm is a bit down. 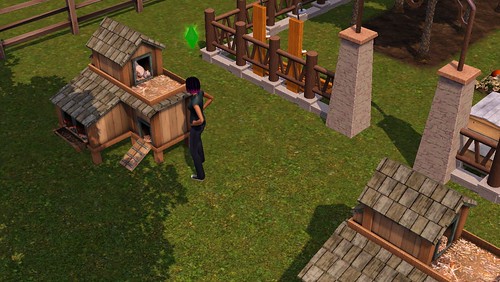 At first, the set seems light on content; a few clothing items that look similar to other items (I kept confusing the overalls from this set with store overalls from another set) and a few minor items that, while lovely, don’t add up to the 1500 simpoint price tag.

And then you get to playing with the chickens.

The chicken coop is the central focus of this set, and in the end it is the primary selling feature. Between being a free daily source of eggs and the positive moodlets received both from talking with chickens and from playing with chicks, the chicken coop itself comes with a number of features that make it well worth the effort to own. And it’s not without financial benefit, as the eggs can be sold.

From a pure profit standpoint, the chicken coop itself is chicken feed compared to other items in the game. A single coop can produce a special egg worth around 1500 simoleons twice a day if the chickens are fed. However, there is random chance involved, so there is a good chance a daily income of 3000 simoleons will not be seen by many sims owning a single coop; to that end, multiple coops are necessary to maintain a steady profit in the thousands. And this does not match the potential profitability of painting, writing, producing nectar, maxing martial arts and combining smashing space rocks with a gem cutter machine, or any number of other money-making options within the game, all of which tend to be far more reliable for steady income and all of which can provide far more income. But the coop does not require the time or skill investment any of those other methods do, making it a nice entry-level self-employment object to rely on while gaining skills in the appropriate areas.

At the same time, the moodlets themselves are worth the effort. The boost received from playing with a chick and then asking a question of a chicken can be enough to help make a sim’s day at work or class even better, and maybe enough to push them to the top that day. Plus, after reading some of the mean but hilarious insults from Charles the Evil Chicken, the positive moodlet gained for beating him in a fight can be satisfying to a player as well.

Note you must have access to the back of the coop to harvest eggs. I learned this while trying to harvest eggs myself and had to move the coops. Oops!

Of course, one must be careful with Charles the Evil Chicken. He doesn’t just insult you in creative ways, but turns out to be quite dangerous in an actual fight. He defeated my level-10 Martial Arts maxed-Athletics sim twice before she was able to score her first victory against him, showing that his eleven-herbs-and-spices talk wasn’t just special sauce. Once she made nuggets out of his ego and sent him back to the roost to consider having his own drumsticks kicked, she was quite happy to wait for the chicks to hatch, leaving Charles to ponder making sim noodle soup from someone else.

The chicks themselves are cute and give a positive moodlet for playing with them, which is really all you can do with them (aside from feeding chickens, as normal). However, getting them to hatch requires you to refrain from harvesting eggs for two solid days, at the end of which you’ll end up with a bunch of chicks and will lose all of the eggs in the coop. If you have the coop for pure profit, this means a potential loss of up to 6000 simoleons. If you have it just for entertainment purposes or positive moodlets, this isn’t a big deal.

The rest of the set consists of clothing that can work well on a farm and items that can be easily implemented into a farm house, sometimes without any recoloration. They look nice, but are not spectacular and won’t make a jaw drop.

Overall, is this set worth the price? Yes. Even more so since it can be easily incorporated into a farm, ranch, or greenhouse and fits a general farm theme.

Oh, and please enjoy this pics I took while playing with the chicken coop!

Compared against venue sets, Country Livin’ is far easier to integrate into existing lots. No time is necessary to study how the parts were intended to go together. The various components fit well with the greenhouse, items from the Pets expansion, and certain items from Supernatural.

The following pictures of a farm I built just for the chicken coop (going back to the much earlier conversation about sanity and rationality…) show just one of many ways it can be combined with other existing items.

Note there are far more pics than this in the Flickr account; I merely limited to this number based on not wanting to be responsible for computer destruction due to pic overload.