My first thought when I saw the teaser cow photo was that the cattle puns would be flying, and the udderly ridiculous amounts of cheese would make even the most lactose-tolerant reach for the Lactaid. I have not been disappointed on that level, and often find myself MOOved to come up with a few of my own. Of course, I have to be careful not to milk this too much, as overuse of puns can lead one to being bucked off the good side of people and facing a stampede of complaints. So, alas, I am forced to lasso that tendency before it gets me cow tipped.

The decor matches the theme as well. It’s all rustic farm-themed decor. I decided that, rather than build an entire house from scratch for this, I would instead focus on an existing house. So, I chose one in Appaloosa (the town just seems appropriate for this content) and began to redecorate one of the bedrooms to use the new content. In my opinion, the result with this new stuff added in and the Pets-expansion bed actually looks better than the original bedroom did. Note the bed, chair at the desk, and the TV are not from this set while the fireplace definitely is.

Overall, the decor fits in nicely with a general farm theme, and can be added to other content in that area with ease. I would suggest using it to improve houses in Appaloosa, if you use that town, or just to build your own farmhouse.

Of course, we all know the real item this set is for: The cows.

The first thing one notices once one finds the Milkin’ It Dairy Corral is the size. This thing is big. Really, really big. Larger than even the hot air balloon, making it possibly the largest piece of premium content released to date. You will need a lot of room for even one of these, and if you’re going to make a dairy farm lot I would suggest sticking with 60×60 or 64×64 for size.

The second thing one notices: The cows, if left to their own devices, are a bit animated. One cow starts out inside the shed they have, then makes a circle outside to be back inside. The cow will occasionally remain inside the shed for a short period of time, and other times it will immediately come back out to continue its circling. At each point of the circling outside the shed, the cow stops by the opening in the fences, giving sims access to them. As such, any part of the sim’s schedule that involves milking cows should have a lot of flexibility built in to reflect the potential amount of waiting a sim has to do while the cow travels.

Milking is also a common cow task. Whether it’s to get a regular bottle of milk or a chocolate milkshake, your sim will put down a stool, set down a bucket, and get to work. It takes only a few seconds of real time and, unlike in real life, the cow won’t kick over the bucket. To get soy milk, you feed the cow a vegetable, while chocolate milk is produced by feeding them chocolate. Of course, milk can be turned into cheese in your inventory, which requires two milks and instantly transforms.

And here are the three types of milk. From left to right, there is regular milk, soy milk, and chocolate milk. Please excuse the plate on the floor; male sim being a bit messy and he will get “talked” to about it… 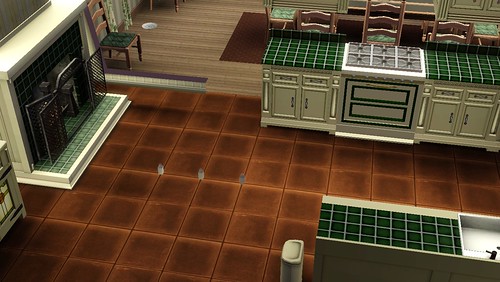 While waiting for more milk to generate, you can play a game of Tic-Tac-Hoove. Even with maxed out logic, your sim can still lose at this, but the win provides a nice short-term positive moodlet that may help off-set the potential results of another action…

The other option, and one necessary for unlocking regular and chocolate milkshakes, is cow tipping. Now, to do this, your sim needs to get a running start and slam their body into the cow… 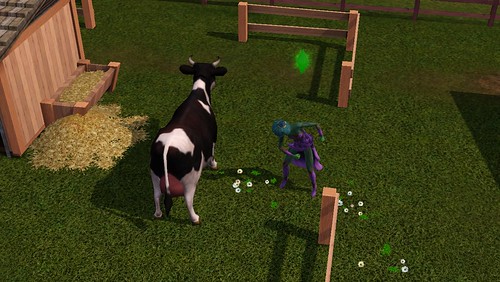 … and most likely end up lying on their back, realizing the bovine is a lot sturdier than they thought it was. 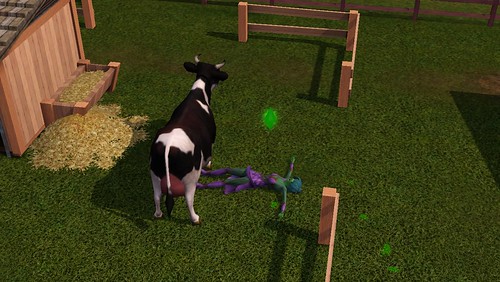 It took my poor plantsim around a dozen tries to finally tip a cow to get a milkshake, while her husband managed to do it on his first attempt:

Here are the milkshakes (vanilla on the left, chocolate on the right), in the kitchen, and… He still hasn’t picked up that plate? *sighs* I may have to put him on Fluffy-feeding duty… 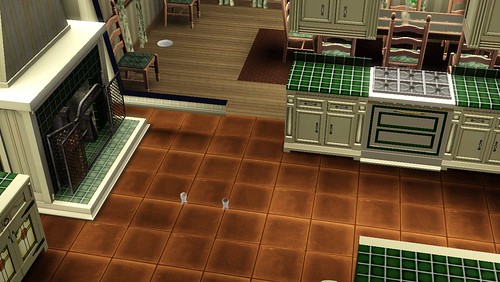 Overall, this is a good set, and the cows are somewhat amusing. Especially the failing to cow tip them and the times they beat you at Tic-Tac-Hoove! And the additional milk-related items are potential add-ons for someone wishing to vary a sim’s diet. I would recommend it, especially to combine with the Pets expansion and the Country Livin’ set.