During today’s Live Broadcast, the Sims team announced a Q&A Session on Twitter scheduled for the 20th of September. For those of you who have Twitter, be sure to follow @SimGuruCopeland, @SimGuruSmitty, and ask them questions you have using the hashtag #HeyGurus.

The Sims 3 YouTube Channel has uploaded “video demos” of the exact same gameplay we saw during the Live Broadcast. I’m unsure if there will be any new videos uploaded (as mentioned), but I’ll be sure to keep you updated. 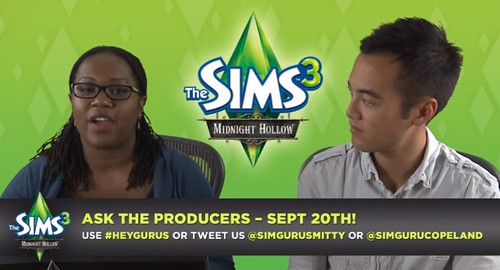