Disclaimer: Remember when I said not to try this at home? A few of you tried it at home. SimsVIP and WhipperWhirl would like to kindly remind you that if you spontaneously turn into a gaseous substance because you did not listen to us, we are not at fault. Note that all who tried it at home have been successfully reincarnated as puppies.

When I first heard about this set, I was excited. It has been a long time since we’ve gotten a spooky venue and I was looking forward to another one to stick in the same town as the library. Plus, the idea of being able to call the Grim Reaper whenever I want is appealing. This means you could ding-dong-ditch the Reaper as a sim!

I was not so excited to learn about the size of the lot… 50×25 doesn’t properly fit in any open lot slot I have seen. And then it occurred to me I could stick this on a 50×50 and modify the lot itself to be an even larger graveyard. So, I am not unhappy.

It has also occured to me that, with a little work, this lot could be converted to a home your sims could live in. However, I have enough on my plate just with the current renovation.

My artist friend actually made me retake one of the pictures for a female outfit, due to the shoes clipping through the dress. She tried to get me to retake the picture where the sim’s eyes are closed, but laziness won out there.

In general, I found the women’s clothing to be both formal and gothic. The women’s suit would actually work well for a butler-themed sim. And the corset top with skirt could work very well in a number of upper-class formal parties. I have absolutely no complaints about these clothes.

The new men’s jacket top would work well with the right set of pants, while the full outfit would work well as a Victorian-themed outfit for someone relaxing at home. Recolored, these can be even better. Overall, no complaints.

The clothing fits the theme of the venue. There is not a lot of it, but venues don’t tend to have a lot of clothing anyway. And what clothing is here can easily be adapted to be used elsewhere.

Pictures are at the bottom of this section, due to number.

The new decor is a fence and gate, a couple of roof items, a couple of windows, the premium content, a door, a tree, and a casket statue. There really isn’t a lot of new items, but given that this is a cemetery, I admit I wasn’t expecting a lot. There’s only so many different ways you can decorate a cemetery before people start looking at you funny.

I’ve been advised by my legal team that the idea to make a cemetery into a festival lot is never to see the light of day, even if all of the festivals would be morbidly joyous. Which is too bad, as I thought the idea was grimly witty.

For the outside of the lot… It’s, well, a cemetery. It looks like a cemetery, feels like a cemetery, and even has a very nice spooky fence. The house has that old look one often expects from a spooky cemetery house and is very good looking for the theme. So, I can’t really say much on it.

The inside of the house has this utterly dead feel to it. It’s almost like peering into someone’s tomb. You would swear nothing living resided there and wonder what skeletons called the place home. In fact, one kinda suspects that getting too noisy would disturb a corpse while looking inside the home. Yes, it has the silence of the grave!

Given the Store team limits themselves to just the base game and the items being added with what they’re making, the inside of Grim’s manor has a wonderful spooky feeling that matches the theme of the venue perfectly. But, with content from Midnight Hollow and Supernatural, it can be done better and made even spookier. Players could easily produce an eerie mansion that makes one utterly uncomfortable to be inside.

The basement itself is just a crypt storing bodies. I admit to being slightly disappointed, but it has since occurred to me that it has potential for aspiring builders.

The Door of Life and Death

This was the part of the venue I was looking forward to the most. The capacity to utterly mess with Death, while at the same time having the capacity to bring them back when they inevitably get killed for their actions to do it all over again.

The blond sim I used for this is named Human Sacrifice. I think you get the idea of her lot in life…

Overall, the Reaper is easy to summon and friendly. A knock on the door to get him to show up, then interacting with him like any other sim. Unless he’s already on the lot, in which case he will be busy. But, you’re not limited to just talking with him…

Jamming against the Reaper is probably my favorite activity with this door. You need Guitar level 4 to even be able to challenge him… and then, you can pretty much count on losing. Which, unless you have a Death Flower, pretty much guarantees your sim is dead. It can be a nice way to dispose of sims that annoy you, such as paparazzi your genie is mind controlling…

Luckily, dying at the door isn’t that permanent.

Human Sacrifice was reincarnated as a baby! She gets a new lease on life! And she can always challenge the Reaper again later…

The Door of Life and Death can also be used as a front door for where your sims live.

As one can see, the door maintains all functionality when placed on a home lot. As one can also see, the door is huge and requires a lot of space to place it; I had to modify a mansion from Dragon Valley to place it. I also have found that, even with it set as the front door, sims tend not to route through it unless it’s the only option.

Note: In my testing, you cannot use this door to kill the Grim Reaper, even if you and he are hated enemies. I have tried; it won’t kill him.

After a lot of consideration, a lot of playing around, and ding-dong-ditching the Grim Reaper at least once… I have to say this venue is worth it. And, it has the potential to get better in player hands.

Now, I am not done yet with this venue. I still am making alterations to it, and plan to showcase those once I have it completed and we are near All Hallow’s Eve! 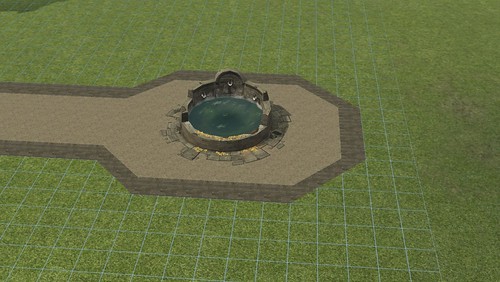