Update #1: SimGuruLyndsay answered a tweet asking what the new free pack was. She stated that’s from the Grim Reaper Guitar that was given to anyone who registered for The Sims newsletter months ago. However, like someone pointed out, the icon does not appear at the moment for us who own that guitar.

If you registered for Grims' Guitar another free icon shows up. (The one shown here)

Update #2: – SimGuruLyndsay states she was incorrect to state that the icon is for Grim’s guitar.

Looks like I'm wrong about that menu icon. But I also get ghost emails so who knows what's up with my computer. 😕 #gurusmakemistakestoo

Update #3: SimGuruDrake says this is for Grim’s Guitar and it shows up on unpolished builds.

It shows up for us as the build folks had hands on with is not a final polished build. You will not see the icon when this pack releases.

An image shared by Brazilian website AlalaSims on Twitter raises a question: Are we getting a new free pack for The Sims 4?

The photograph, apparently taken at Sims Camp this week, shows the game main menu with two icons under the Free Packs category – we currently have just one, the Holiday Pack that came out in 2014 and has received updates since its release. 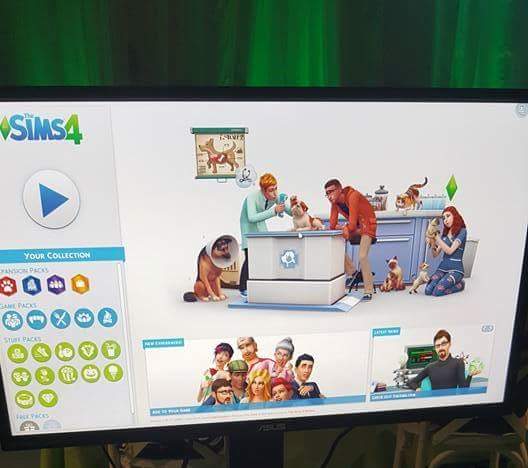 Ever since the main menu got its latest update back in February, it’s been expected that we’d get at least one other free pack in the future, which would justify adding a whole new category for free packs.

Since the most recent quarterly teaser showed only one pack for this quarter (recently released The Sims 4 Toddlers Stuff Pack), we’ll have to wait until the September update to see if we’re getting this newly discovered Free Pack this month or if it will come out next quarter.

Since this is all assumed by a leaked photograph, SimsVIP will consider this a rumour until it’s officially announced by someone from The Sims team.