Here to kick off SimsVIP’s December Community Spotlight is community YouTuber Bellguru8! In a brief introduction below, Belle gives readers a chance to learn a bit more about what she does in the community. Take it away Belle! 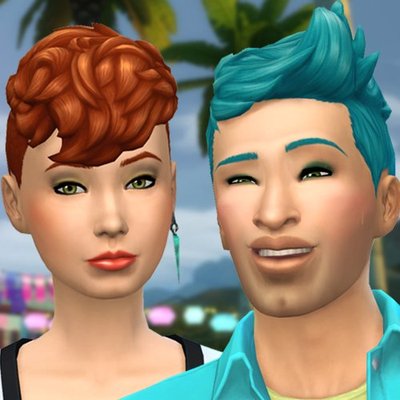 Hey everyone, my name is Belle (Bellguru8 on Twitter and Youtube) and I am from Switzerland. A few days ago I received an email from Alexis asking me if I wanted to be Sims VIP’s Community Spotlight for December 2017. I had to pinch myself because I could not believe for a second that this was really happening to me.

Before I tell you a little bit more about my Channel and myself I want to thank Alexis for giving me this incredible opportunity. I am following Sims VIP for about 2 years, they are one of my favorite Sims4 News sites, and I enjoy watching their informative videos on Youtube. I read almost every Sims VIP Community Spotlight article and I would never have dreamt that they would feature me one day so I cannot thank you enough Alexis; this means so much to me.

My first ever Sims game was a gift from my boyfriend. In October 2014 we went to Suisse Toy and EA had a booth there where they sold the Sims4 Basegame that just released almost a month before. I remember that I was not that excited when he bought me the game because I had never played any of the Sims games before. It took me some time to warm up to the Sims4 but when I eventually did; I liked it more every day.

In fall 2015 I started researching information about the Sims on the Internet and found out that people do Youtube Videos about the Sims. I started watching Deligracy and The English
Simmer and a completely new world opened up for me because I realized that there was so much more to the Sims 4 than I ever thought there was. I discovered that people made Speedbuilds and showed how they built houses for the Sims4, they even did Let’s Plays and I began to binge watch so many Sims4 videos. To be up to date I started to check Twitter and saw that there was a whole Sims Community out there so in February 2016 I decided to start my own Twitter account where I could share my passion and love for the Sims4.

I met so many kind and amazing people from all over the world. We may be of different age, gender, religion, upbringing, countries and we speak different languages but we have one thing in common, we love the Sims and it is the best thing ever to share your passion for something with like-minded people. Apart from my boyfriend, no one I know in real life plays the Sims4 and its just awesome that now I can talk about my favorite game whenever I want at any time with Simmers all around the world.

For the first year of me playing the Sims I was scared to touch build mode but after watching so many Speedbuilds I was inspired and wanted to try it out myself and I never thought I would love it so much and I started to share my creations of Sims4 houses on Twitter. A year ago in December 2016 SpringSims featured me in his amazing Simmas Showcase. I was so excited because for the first time someone showcased one of my houses in a video.

In addition, I realized that I wanted to start my own Youtube Channel. I talked about it with my boyfriend and he really encouraged me, and told me he would support me fully if I wanted to do it and for Christmas, he would gift me a microphone so I could record. I also talked about it with my friends Fry (Simproved) and Aden (Devon Bumpkin) that have supported me from the beginning and they and many other Simmers encouraged me to start Youtube as well.

I uploaded my first video on January 1, 2017 as part of a new series called Bellguru’s Renovations where my goal is to renovate every premade house in the Sims4.

I wanted to do Let’s Plays and other things on my Channel as well so I started my Filthy LP in January where I tell the story about young, spoiled and pretty Talia that participates in a reality show. She has to live in a dirty and ugly apartment without any money and any job. The goal is that she not only survives but also works her way up from zero to 100’000 Simoleons. Once she has reached her goal she can move into her dream house. We are currently at Episode 20, which is a special Machinima Episode where the Family adopts a Cat and a Dog and they explore Brindleton Bay together.

On my Channel, you can find Speedbuilds and all sorts of Challenges. I love doing collaborations with other Simmers, I think it is such an amazing way to get to know them and to challenge yourself to build or create new things and I have some exciting collabs planned in the near future.

A few weeks ago, I started a new series called “A day in the life of” where I visit all premade Sims4 Households and stay with them for one sim day without controlling them. The goal is to get to know them better and see what they do when we do not play with them. I have a lot of fun with this series and I cannot wait to record the next episode.

I work as a librarian in real life and I really love my job. I have built some libraries in the Sims4 and there will be many more. My favorite library so far was the Biblioteca Omnia I made for Simproved’s #SimsWithDisability tag.

Apart from the Sims4 and Youtube my hobbies are reading, listening to music, going for a walk with my boyfriend, watching movies, cooking and painting. I love to interact with people on Twitter and Youtube. I reply to every comment on Youtube and to every Tweet on Twitter. To know that people watch and like my videos and take their time to leave a comment is just the best thing ever. I appreciate everyone that comes to my Channel and I love to interact with you all. I am very excited to see what 2018 will bring for the Sims4 and for my Channel! Thank you again Sims VIP for letting me do this Community Spotlight!