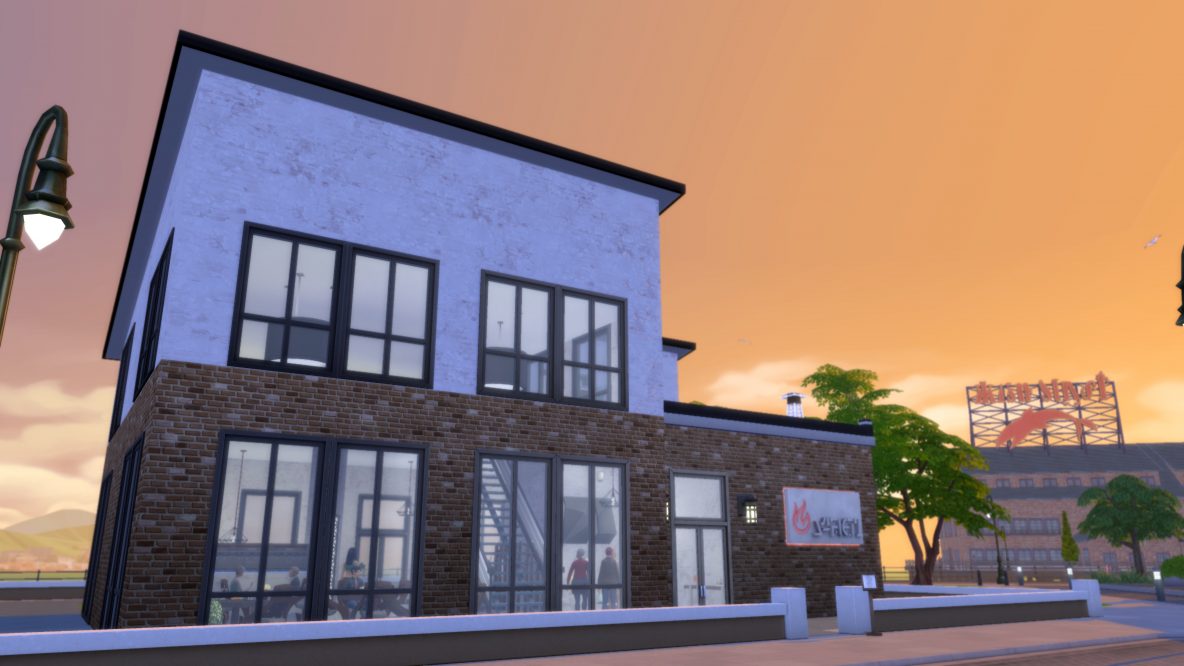 After the San Myshuno Times reported the trash fruit incident of The Diving Pelican, the city hall has reacted fast and shut down the restaurant. Since then, the shore-side building has been in abandonment. Recently, a new landowner decided to tear the old structure down and erected a new establishment—The Old Salt House. Our in-house food critic, Geeta Rasoya, saw the new place and decided to give an in-depth review. Hopefully this time no trash fruit is involved in the food-making.

Let us take a look at the backstory of this restaurant first. I was instantly amused when I first spotted the place. The owner recreated the structure of the house that once stood ashore before The Diving Pelican replaced it. It was warehouse-remodeled abode called, unsurprisingly, “The Old Salt House,” from which the owner clearly took inspiration to name the establishment. I’ve never been inside of the house, but I can confidently say that the owner replicated the external structure accurately. From the stone fence surrounding the building to the outdoor wall lamps, the place looks just like how it used to be when I first moved into Spice Market.

If your taste buds are the adventurous type, then they should be pleased to know that this place is all about “modern food.” Most of the dishes served in here will look out of the world. Some will even require an exceptional palate, like mine, to distinguish the different flavors in them. Menu-wise I would say it did meet my expectation; the nectar list has one or two good enough selections as well.

It was during rush hours when I entered The Old Salt House. The host greeted me rather fast; faster than I anticipated, at least. But somehow he went past me and seated another group of customers that came in later than me. If the owner is reading this, give the guy proper training before putting him on the frontline. He obviously does not know the basic concept of time, very sad.

Since it is located right by the dock, the view from The Old Salt House is as impeccable as advertised. You can enjoy the down-to-earth scenery of Spice Market when sitting on the ground floor; that is if you think watching people playing basketball in a park enjoyable. And if you are lucky enough to be seated in the booth seats upstairs, you can overlook the grand cityscape as well as the ocean view. It is rather breathtaking, in my opinion. The eatery also offers a private section which provides eight seats, perfect for a large party of sims wanting to wind down after a tiring day. Though personally, I would prefer to eat alone or with a best friend or two for unwinding. For me, chatting with those who do not have the intellectual level to understand my jokes is just difficult.

Oh, wait, I have not talked about the food yet? Sorry about that. It is fairly normal for a sim as knowledgeable as me to talk this much.

I would admit, I did find a few plates in my order quite delectable. Also, thanks to their rich nectar list, some of the less-impressing ones are still palatable.

I ordered the “Glacier Infused Iceberg Lettuce” and paired it with a glass of Granite Falls Grappo Blanco. Let us just say: I do not like it, not a bit. The ice-y texture, as well as temperature, kept giving me headaches. Moreover, it was just lettuce. Seriously, it was simply lettuce soaked in iced sauce that gave a light sweetness to the dish, nothing noteworthy. The white nectar, however, revived my palate and saved this close-to-doomed appetizer.

Come on! You cannot come to an oceanside restaurant without ordering seafood. So for the main course, I decided to try the “Artisan Fish Trio,” and it did not disappoint. Three fillets of halibut were presented in a whimsical circle on the plate. Since I have a rather high skill level in cooking, I know halibut is an unforgiving type of fish to cook. Nonetheless, the chef excelled the temperature and seared it to utter perfection. Paired it with a glass of Riverblossom Cranerlet Nuala, and voilà, magic happened! Honestly, it would have been even better to leave out the spring vegetables on the side; they had a strange, plastic-like texture (#JustForTheHalibut).

I wanted something rich for a grand finale, so the Crystallized Coco Blocks was a fair choice for dessert. Dark brown and white cubes were playfully built into a block-like formation. Thoughtfully plated on a black, square platter; it was pleasant to look at. The bitterness of cocoa and the sweetness of sugar reached such a balance, it was like a spa day for your taste buds.

Ah, the service… well, it seemed to me that the staff members are desperately in need of some training. Except for the chef, of course. A little digging revealed that the Head Chef is the renowned Yolisa Wray. Before joining The Old Salt House, she used to be the Sous Chef in the famous restaurant, Chez Llama. I have great respect for her since she invented several award-winning dishes back when she was working in the Newcrest-based establishment.

Back to the other staff, I was glad that no one recognized me as the greatest food critic Geeta Rasoya because I got to see their regular side. Apart from the confused host, the waitress of my table was somewhat clumsy. She dropped my courses twice; not once, but twice! And I had to wait longer for re-fires. Maybe it was pure luck (or bad luck, in this case)? Although she did try very hard to sell the “chef’s choices” items to me when she learned that I live in the neighborhood. And we all know that chef’s choices are the cheap items of the day for the common sims—like most of you, my dearest readers. So I think the waitress and I just might become good friends in the future.

All in all, I would give them two out of five stars. The food was good, and it was due in no small part to the fact that Yolisa Wray was in charge of the kitchen. However, the service I received was the absolute worst. The owner should send the host and waiting staff to classes before having them to do any job.

Oh, wait, I forgot the view was beautiful. Well then, three stars it is.

Hello! The Old Salt House (restaurant version) is up in the Gallery. You can search it by my EA account: samsam713.