In response to a fellow simmer who hopes that Maxis has learned from past mistakes like The Sims 4 My First Pet Stuff, SimGuruGrant stated that they knew the community was frustrated, but the game “sold well” regardless.

It’s interesting how My First Pet Stuff went. Community sentiment was frustrated. But, it sold well. For now we probably won’t do this in the future (probably), but I still think it’s interesting. Adding more content for themes that are already released.

My First Pet Stuff was lambasted for withheld content, duplicates, and the addition of small rodent pets just 3 months after the Cats & Dogs Expansion release. Players felt the pack was literal money grab, and hope that it’s not repeated again in the future.

I cannot show you the financials or the details…so what I'll say has to be taken at face value. But, we didn't do that. We put everything into Cats & Dogs. I think the timing was a little off, but again, we wanted to experiment.

With My First Pet Stuff doing well as an “experiment”, does this mean we will see more DLC for DLC down the road? Only time will tell! 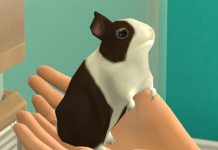 The Sims 4: Bunnies, and Squirrels, and Chipmunks OH MY!