This installment of the Climates is brought to you by The Sims 4 Seasons Expansion Pack,* which is available for PC and Mac. This story also features content from The Sims 4 and The Sims 4 Spa Day, available on PC and Mac via Origin.

Before diving in, check out Part One and Part Two of The Climates.

Part Three – Down the Rabbit Hole

Arthur shifted between poses, steadily increasing the difficulty of the postures. The slow, consistent downpour of the rain calmed his nerves, eased his clouded mind . . . and masks the noise of his fart as he bends uncomfortably far.

Arthur’s eyes dart left and right checking to ensure his wife didn’t hear him. She would never let him forget it. Summer would also mock him relentlessly. Nicholas would just imitate him, solidifying his yoga faux pas for days to come. Confident the coast was clear, Arthur exhaled once more to finalize his routine. He stepped out of the gazebo into the rain.

Arthur loved the rain. The way it smelled, the way it sounded as it hit the roof, the way it brought life to the ground.

“Getting a little philosophical there, Art,” he said aloud to himself.

He examined the plants in his garden, and made sure the rain was filling the soil with its life-giving nutrients. He took another quick look around the yard, gradually getting more and more soaked, and ended up under his favorite apple tree.

“Honey, you coming inside?” Janine shouted from the porch. “It’s really coming down out there.”

Still feeling a bit zen from the yoga, Arthur stretched out his arms and looked up into the sky. I could just take a shower here, he thought to himself.

Lightning struck Arthur and knocked the wind out of him. His vision faded. The darkness closed in. Arthur mumbled toward the porch to tell Janine he’d be a few minutes longer.

Arthur awoke, but found himself not in his yard, but some place entirely different. The rain had stopped, and the sun was shining. There were flowers blossoming everywhere and the wind had disappeared.

The world looked off. Definitely weird.

“Where am I?” asked Arthur aloud.

He heard a rustling nearby and turned his head quickly to check the source.

Its voice was as high-pitched as its ears were large. It wore an antiquated, yet colorful outfit and swayed back and forth on the balls of its feet.

“Haha, my friend! I said welcome,” repeated the bunny. “Come! You must find my eggs!”

Arthur slowly stood on his feet, scratched his head, and looked around for someone to explain what was happening.

It walked off in the opposite direction, a dainty bounce to its gait. Arthur followed, slowly at first, then picking up speed as he felt his senses returning.

“There’s one!” shouted the bunny. Arthur bent down to examine the spot and found an egg. He stored it in his pocket and followed the bunny, who quickly began moving again.

This continued for some time. The bunny would point out an egg, Robert would grab it, and the bunny would joyfully throw colorful flower petals into the air.

Finally, they reached the end of the yard. The bunny abruptly stopped, turned, and asked for the number of eggs. As he reached into his pocket, Arthur dropped to the ground. The darkness clouded his vision once again. Everything in the world, including the bunny, faded from existence. 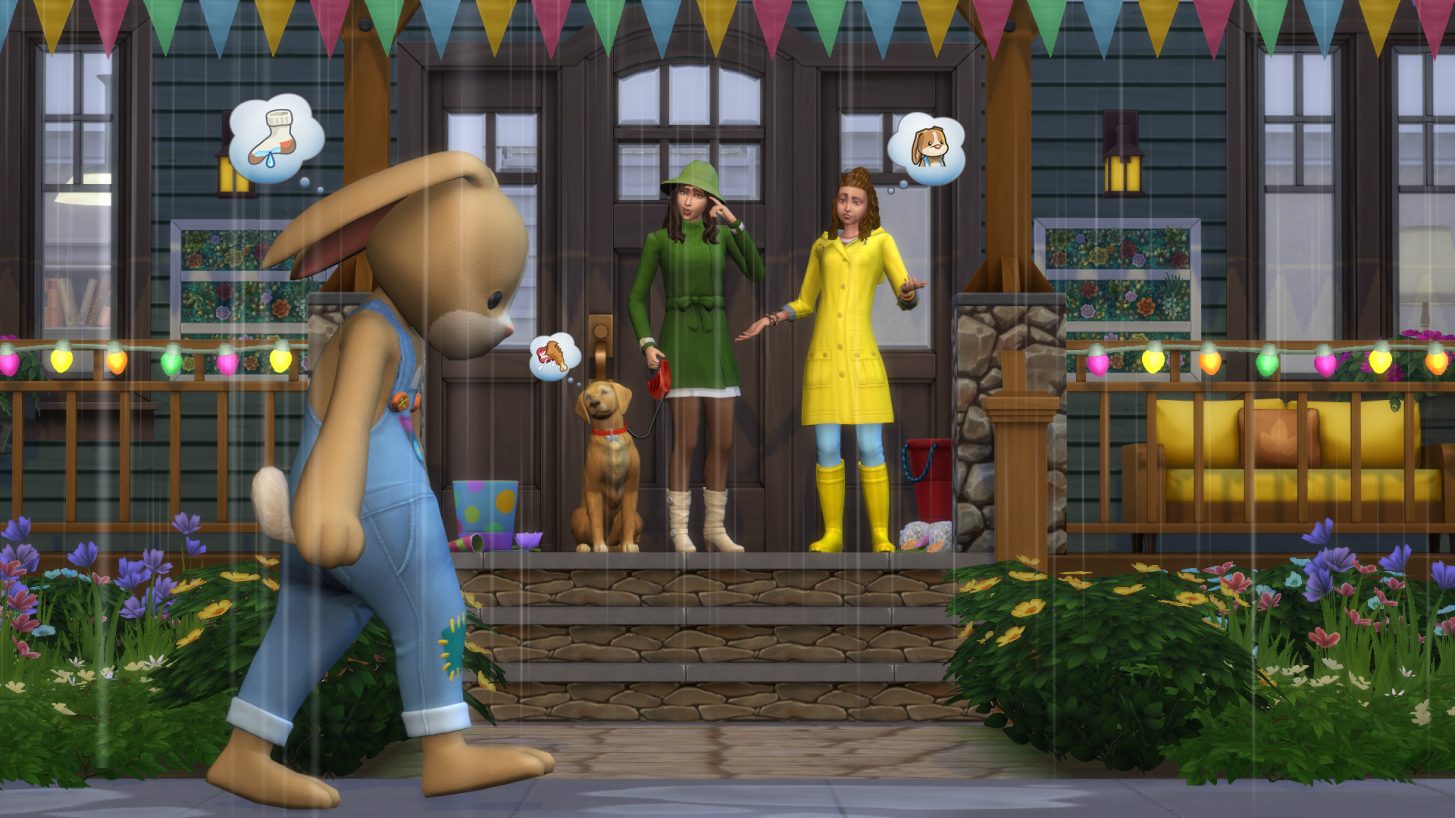 She loomed over him, a few feet from his face. Arthur crackled with a strange energy – and a dizzy feeling – as he looked up at his concerned daughter.

Summer looked at her mom. The two of them locked eyes.

“There is no bunny,” said Janine.

She held Nicolas, who was in tears at the sight of his dad lying on the ground.

“What the heck happened out here?” asked Summer.

Arthur ran his hand through his crispy hair and explained the lightning strike. He looked around the yard for a long time. He knew the rabbit was real. He couldn’t be imagining things. Just then, he reached into his pocket.

“Believe me now?” he asked, with an egg in his hand.