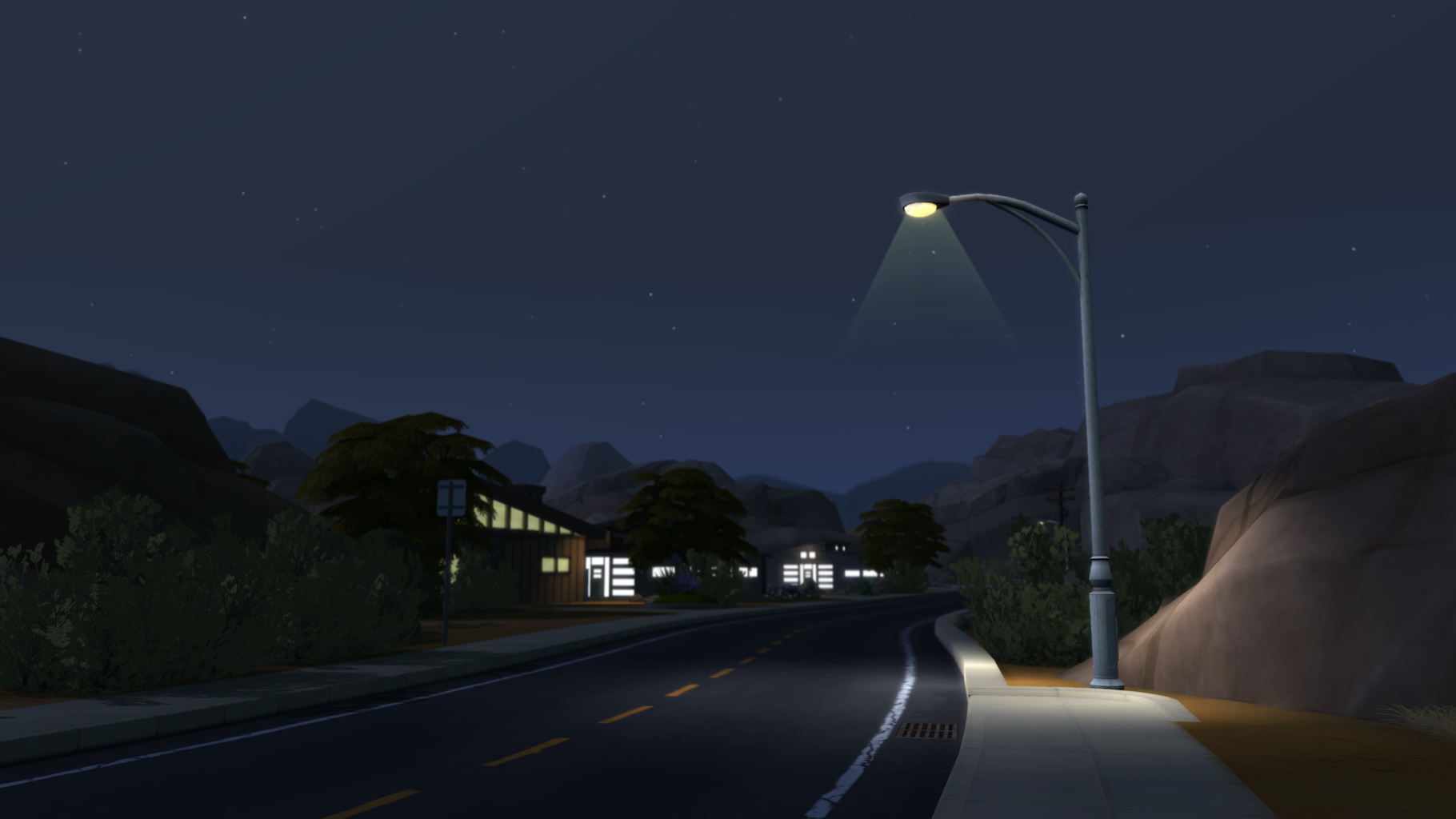 In the early morning of Spring 9, Oasis Springs local Johnny Zest found a sim collapsed on the pavement before his house. The man claimed to have fled from StrangerVille, a neighboring town no one has ever heard of. According to Zest, he wore a hat which is made of “a colander-like device, wrapped around with holiday string lights.” Furthermore, he refused to give Zest his name. In short, Zest described him as “paranoid plus neurotic.”

From the E&A’s index, our reporter did find the file containing basic information of StrangerVille’s rediscovery and reconnection in 2018. It is located at 53.1 kilometers (33 miles) to the east of Oasis Springs. However, the archive of the Bureau of Land Management does not have any documentation of that town.

The nameless sim kept rambling to Zest that an “imminent danger” is approaching, and that a “military secret project” is making sims in StrangerVille having bizarre behaviors. “He told me that their bodies contort to impossible shapes and their faces have this creepy smile, so I called the police immediately,” says Zest. Oddly, the sim ran off as soon as he learned that Zest contacted authorities.

The desert town’s police force was on the brink of closing the case as a prank, but further developments that partially verified the mysterious sim’s claims halted them from a conclusion.

Officer Patricia Bryson and Felix Tam were the ones called to Zest’s property. Initially, they were going to dismiss the case after Zest told them that the unknown sim fled. Nonetheless, Officer Bryson figured that they could check out the validity of Zest’s account and drove east. The patrol car soon encountered barricades set by the Army on the town’s borderline. “They wouldn’t let us pass,” says Officer Tam “Saying that they’re deploying a quarantine zone for a possible epidemic taking place in a town 53 km away.”

“‘Only military personnel can go beyond the checkpoints,’ they say; then insisted us to turn around and go back.”

Earlier today, The Ministry of Defense has released a brief statement regarding the incident. For starters, they officially acknowledged the existence of StrangerVille and confirmed an Army base being set in said town. Yet, they stated that the ministry “is not certain of what is going on in there,” and that the military “is doing their best investigating the StrangerVille situation.”

Oasis Springs locals do not feel reassured by the Defense Ministry’s statement. On the contrary, theories and conspiracies are running wild around the town like a dust storm.

Zest thinks the central government is responsible, “I think they’re covering up the mess they’ve made that are making sims zombies.” He has little reasons to back his theory at the moment, however. “Or why would they deny everyone but the military to enter that area?”

Some are assigning the blame on FutureSim Labs, saying their research on vampirism has gone wrong and it spreads like airborne viruses. “That’s most preposterous,” exclaims George L’Ernitage, the Laboratory Leader. “Categorically untrue; if we were to research vampirism, which we weren’t, it’ll be a common sense that a vampire virus transfer through body fluids, not air.”

There are even a few sims believe that the Landgraab Industries (LGRB, ▲§9) is the mastermind behind everything.

As the event continues, the SMT will bring you the latest development.