Donna Bennett is a modeler on The Sims 3. She was responsible for crafting the focal point of Lunar Lakes, the massive spacecraft called The Perigee, which brought our Sims to this fascinating foreign planet. Donna, can you tell us a bit about the spaceship and what it was like to work on this complicated model?

The spacecraft was a fun and different assignment as I usually work on everyday objects and conventional buildings. Focusing on anything from space is a real treat! Our team decided we wanted The Perigee to look like it had crashed and Sims had built buildings around it and moved civilian operations back inside. The blue lights inside the ship’s hull cavities are designed to look like dwellings for Sims living in the ship. 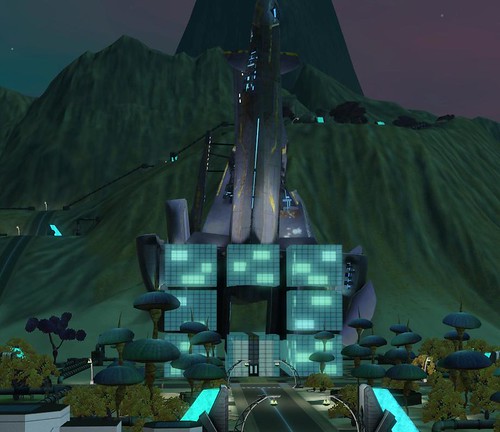 The steps for creating the model was to first build the spacecraft intact and upright. We then rotated it and finally decided to twist the hull slightly. We then slowly started picking away at it so it looked destroyed. Most of our time was spent creating holes, making flaked away panels and adding “new” lights to the cavities. One of the most challenging areas of working on this model was adding the level of detail to the edges of the holes to make The Perigee look destroyed, yet repaired and re-inhabited. Another challenge was working on a model that had been rotated in space so it wasn’t at right angles anymore. That’s tricky in 3D. Despite the challenges, the most rewarding part of the process was creating the destroyed look of The Perigee using the big holes. It really gave the ship character and made it different from any model we have previously created for The Sims.

Concept art for The Perigee: 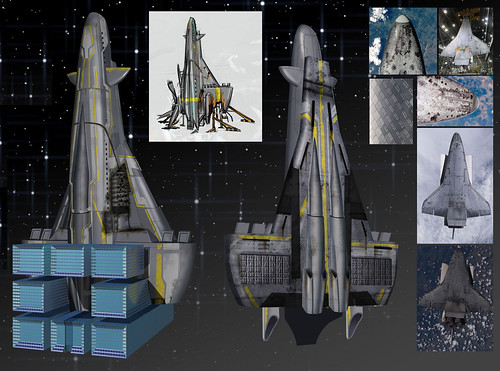 Mike True is a jack of all trades – sometimes a modeler, sometimes a texture artist, yet always a builder. In Lunar Lakes, he created many of the houses and the community lots. Mike, can you tell us what it was like to build lots for this unique setting and share with us some of your favorite locations in Lunar Lakes?

Lunar Lakes was challenging from the get-go. Although the initial design concept of creating a world on another planet sounds simple enough, the real challenge was making something that would read as another planet but would still appeal to our players. We initially explored what “futuristic” meant and decided we two ways, either a post-apocalyptic direction or a funny, Atomic Age/retro future direction. In the end we settled on someplace in between— a volcano-infested moonscape with a bright sulfurous marsh. Of course, this is much easier said than done! 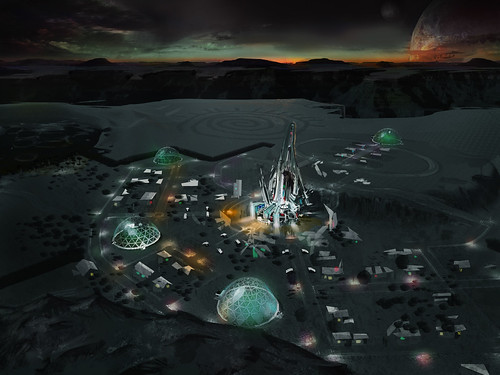 Building lots in this world was fun because we could really throw out a lot of the “rules” we impose on ourselves when we try to make lots as realistic as possible. We initially experimented with lots that defied gravity and ignored a lot of construction limitations we have on earth, but ultimately went for a more “futuristic but still buildable with earth materials and gravity” style for most of the spacecraft plain houses. The homes in the volcano craters were more naturalistic, sort of a space-hippy vibe. In the end, many of the houses ended up with a science fiction movie style. 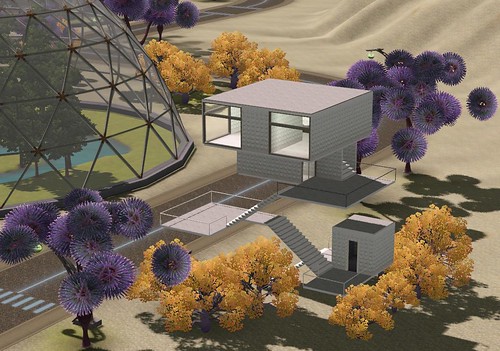 The houses that we built for the Sims living in Lunar Lakes presented special challenges that were more fun than difficult, such as “what does a space bachelor pad look like?” or “what makes a Sim house artistic when every house is not the norm?”
For me, making the community lots is a very enjoyable experience. I usually start with a concept or idea. For example, the gym started as a stack of individual workout pods and the library started as a model reminiscent of the United Nations building in New York City. My favorite venue is the pool bar. Its window tanks just seem like a very “Sims” location, even in this off-world setting. 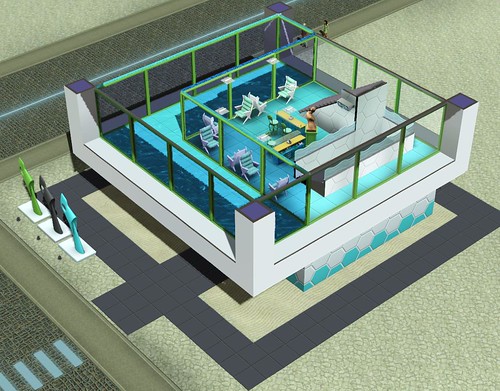