Things of Old and New (A SimsVIP Story) Part 3 | SimsVIP

The night passed into morning and Patrick Denton woke up bright and early. Having received a text message from the airport indicating that they had still not found his lost luggage, Patrick decided to go ahead and find a new wardrobe for his upcoming job interview. Heading downstairs, he first saw Alex getting ready to go to his work place, “Mike’s Memories”, in the district of Magnolia Promenade. Having heard of the area and its many shops and clothing stores, Patrick decided to join him. 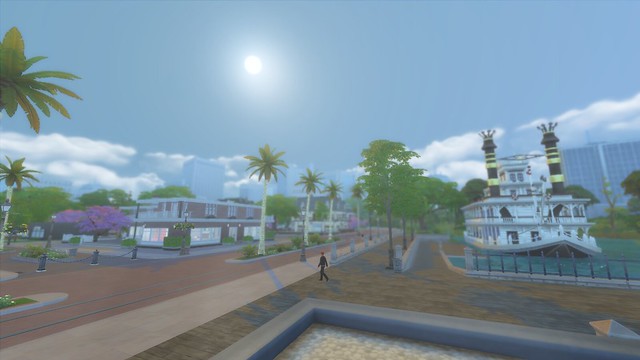 Magnolia Promenade was a place full of people looking for a good deal outside of Port Ridge. Just a short ferry ride from Willow Creek, the district shared the small town’s overall French Quarter aesthetic, but with newer buildings based around a Mall of America-styled theme. Patrick stepped off the ferry just after Alex, breathing in the air around him and taking in the atmosphere of the area. Off in the distance, the city of Port Ridge shone brightly in the midday light, making Pat want to go there just that much more.

Patrick first followed Alex to his own store. Inside was a large selection of electronics from all types, from televisions to computers, to even the nifty holographic projector games he’d heard about. Patrick wondered if they had one of them back at the house, but he didn’t want to go snooping lest he found himself in an area that Max didn’t want him to be. 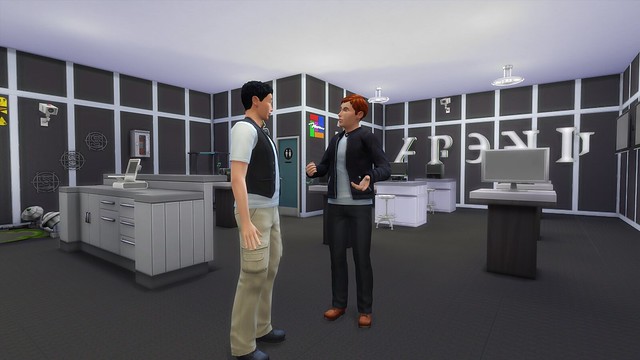 Patrick looked around the shop, then found Alex checking up on one of the computers on display. Amazed at how much tech he had packed into the little building, Patrick decided to talk to him about it when Alex walked back to him. “This place is amazing, this must have taken some serious capital to get off the ground.”

“Yeah, I had to get a business loan, borrowed some from Max and Sam, and I went in fifty-fifty with Andy.”

“Yeah you mentioned that person the other day, who’s Andy?” 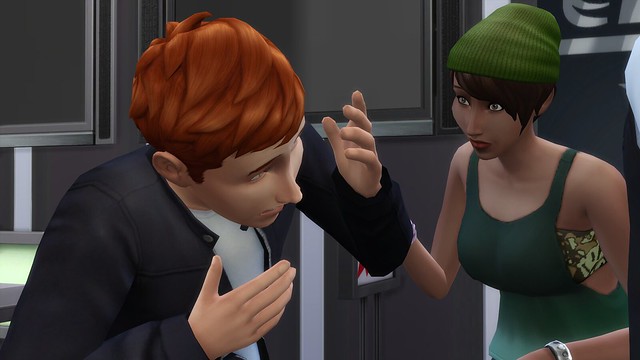 “I AM!” Patrick’s heart nearly jumped out of his ribcage from someone yelling right into his ear. He turned and noticed a younger woman standing behind him wearing a tank top, a beanie, and other clothes that reminded him more of a late 90’s album cover than late 2017. “I’m Andrea but everyone calls me Andy! I’m so glad you stopped by Mr…. Denton! Yes Denton! Alex’s told me a marginal amount of things about you!”

“I only know a few things about him in the first place, Andy.” Alex said, chuckling, “He just moved in like three days ago.”

“Oh yeah. Well I’m Andy, I like long walks on the beach, dancing, and all sorts of wonderful things because wonder things are wonderful. Anyway I am going to go get some breakfast down the road at that nice little bakery would you like to join me please say yes!” 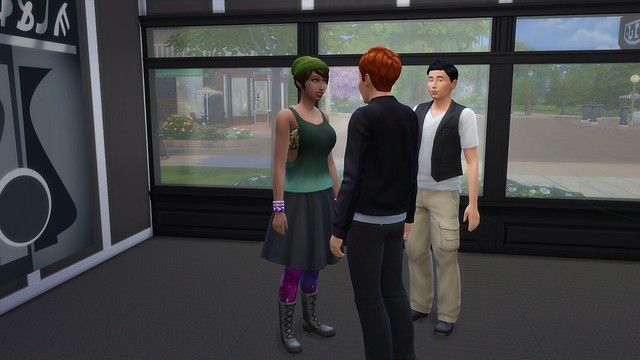 “Sure!” Patrick smiled, and Andy visibly perked up. He didn’t really know much about her but she seemed nice enough, and he figured that she knew enough about Alex and possibly everyone else in the household to fill in some pieces.

Alex nodded at the two as they turned to leave. “Okay, get me a muffin or something, you know what I like, Andy.”

Andy smiled again and walked out the door. Patrick shrugged and followed her outside. Just down the road, he could see the bakery that Andy was talking about, and the two walked side-by-side towards it. The walk itself was quiet, allowing Patrick to take in more of Magnolia Promenade’s beauty. When they walked into the lot, however, Andy began talking again. 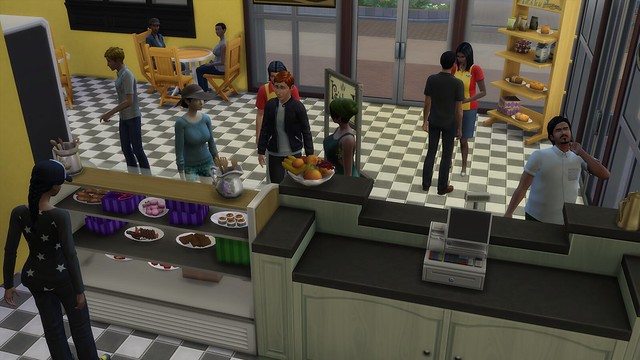 “This place has like the best muffins anyone could ever eat I mean wow they’re so good. And the donuts? To die for. In fact everything is good here!”

The two walked waited in line, ordered some food, and sat at the table to wait for it to be ready. As they did so, Patrick looked towards Andy. “So how long have you been in Willow Creek?”

“A year or so. I met Alex in business classes we both attended while going to college. He told me about an idea for an electronics store and I was all for it. When he came back to Willow Creek, I decided to tag along. I live not too far from where you do.” 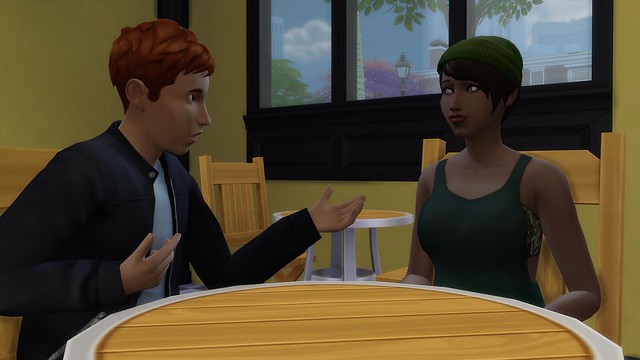 “Why not live with everyone at the mansion? Surely they could have used your help with paying the bills?”

Andy shrugged. “Max pays most of the bills, family money and all that. Plus they all put in money from Mike’s insurance policy. He had a motherlode of money for all of them put there specifically for if something happened to him.”

“Mike… that lady Alice mentioned him yesterday, she seemed very distraught when she did so. What did happen to him?”

“He, uh, he died a year ago. Everyone came back to town for the funeral and have been here ever since. Alex named the store after him. He wanted to do another store, an antique and pawn store based on an idea Mike had but I have no idea if he still wants to do it.”

“Oh.” Patrick remembered asking everyone why they all came back, getting nothing but an awkward silence. He realized that bringing up Mike was a touchy subject, one of the touchiest it seemed. He wasn’t going to ask Andy HOW Mike had died, because he didn’t want to pry any more than he already had. Realizing he quickly needed to change the subject, Pat said “So you’re not from Willow Creek, where ARE you from?” 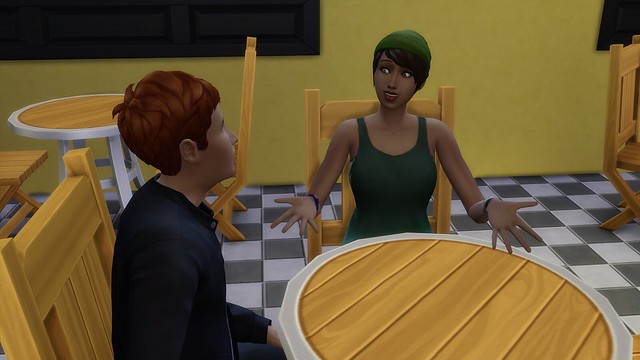 “Sunset Valley. a small town in California. It looked different from this place, a LOT different. Things seemed to be more, well, ‘real’ so to speak. My family left there after a falling meteorite destroyed the main park, we then moved off to Bridgeport in upstate New York. I guess that’s where my love of partying came from. And I do love to party. What about you? Alex said you’re from the ol’ desert of Oasis Springs? Is that near Lucky Palms?” 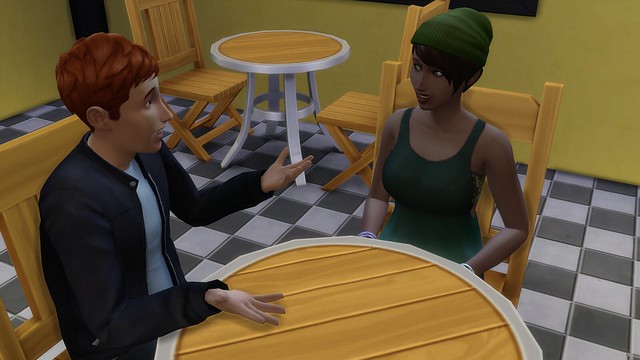 “Yeah it’s not too far away. We also had a casino there but I never went to it. I lived there from when I was eight to just a few days ago. Before that I lived in some forested area, but we had to leave because of a forest fire that was approaching. We lost everything, including every picture of me as a toddler.” Patrick then chuckled, “I’m not even sure if I ever was a toddler.”

The two shared a brief laugh. Just then, the bakers told them the food was ready so they grabbed the muffins off the counter, paid for them, and headed back towards the shop. Patrick hung around the shop for another hour, then said his brief goodbyes to both Alex and Andy before walking back around the district of Magnolia Promenade. He made his way to a large clothing store, where he purchased a nice suit jacket and a long coat for whenever winter would come around, if it ever even did. Patrick stayed in the district for a few more hours before deciding to jump on the ferry and head back home.

It was just after nightfall when Patrick got back to the house. Just as he did so, he heard a small noise coming from nearby, it was an odd whirring sound and it was coming from the side yard of the house. Alex and Andy were still back at the shop as far as he knew, so it was obvious the latter wasn’t trying to scare him. Expecting to see Max or Emily outside working on some experiment for their respective jobs, Patrick walked over to where the noise was coming from. What he saw, however, startled him completely. 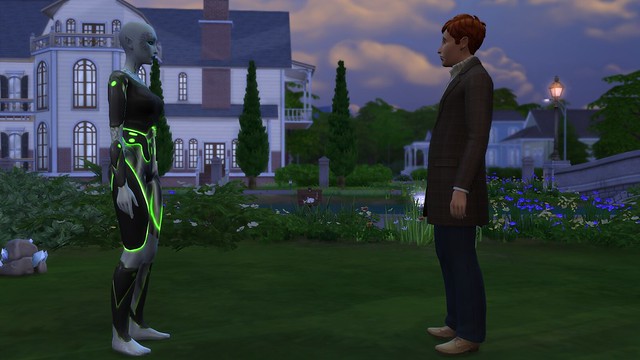 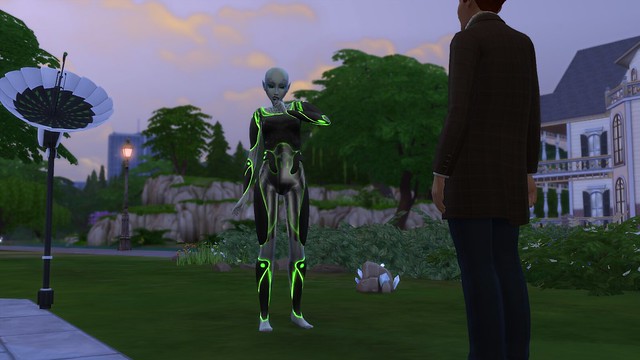 It was an alien, a alien woman using some kind of satellite dish. He was so paralyzed with fear that he could barely move, but the alien still heard him breathing and turned towards him. She seemed to have a worried look on her face. Quickly she pressed a button on the dish and it vanished into thin air, with her doing the same seconds later. Patrick stayed where he was for a few moments, breathing heavily, and then everything went black.