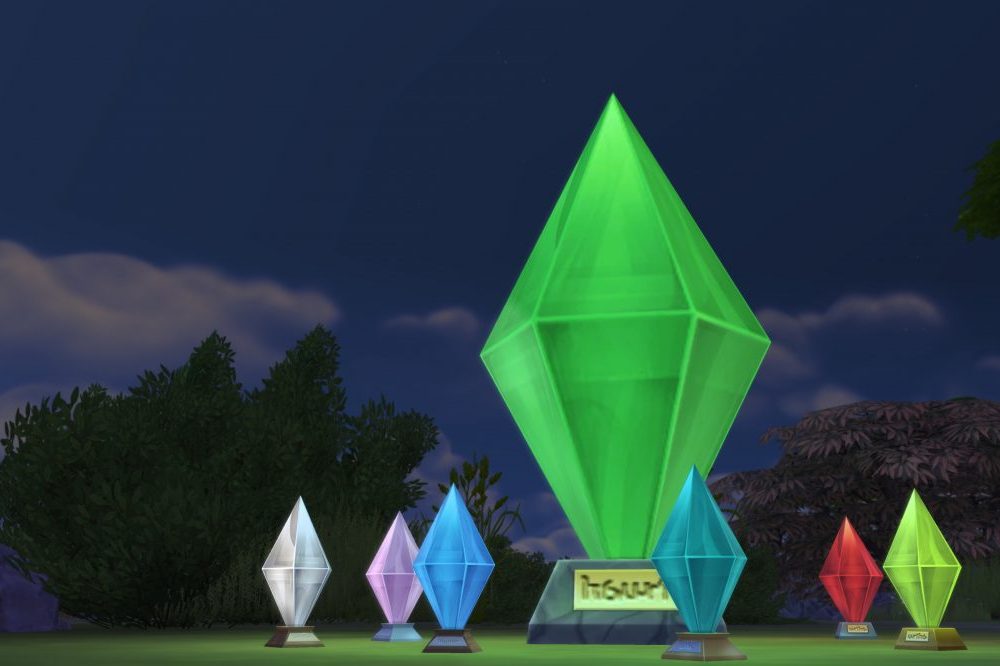 No matter it is by school or family, almost every sim in the world has been taught the importance of this day – día conmemorativo de las Plomadas – also known as the Plumbobs Memorial Day in modern Simlish. Although stories vary when it comes to different beliefs, sims are told that this particular day marks the very beginning of everything.

In Windenburg, some of the religious sims gather in a temple. One by one, they place lighted candles on the altar in front of an image of a Plumbob. Many believe that they will receive blessings from the Plumbobs through this ritual. “So far the almighty Plumbobs have given me a pretty good life,” says Matteo Hamilton, a resident of Windenburg. “The other day I received §50,000 out of the blue, and the transaction note only said ‘motherlode.’ I’m very certain that it was given to me by the Plumbobs, and I finally could afford those laundry machines that everyone’s been talking about.”

According to the sacred text, the Plumbobs created the world on the “Creation Day” – cuarto de febrero del año 2000. However, archeologists do not know what calendar the ancient sims use, thus unable to interpret the date. One historian pointed out, “We can’t seem to find any documentation of it (ancient calendar).”

It is said that on that day, the head Plumbob, Will, constructed the universe piece by piece alongside other Plumbobs, and they have been controlling the world since. Moreover, the scripture states that the number of Plumbobs dynamically changes over time. “How poetic! It all began with Will, guiding our will,” says Hamilton.

If you are a believer in science, you might think the previous claim as total nonsense. But scientific research revealed that the “Creation Day” did exist, though scientists coined the term, “Day of Existence,” instead. Coincidentally, both days fell on the same date.

In the 1800s E.F., astronomers and physicists were eager to find out the origin of the universe. Fish mogul Barnabas Skye had someone built an observatory, which at the time was the most advanced one, in the yard of his mansion. With a few science-loving friends, he formed a group, known today as the Barnabassian Scientific Society. They were determined to unveil the mystery of the universe, and unveil they did.

While going through the files in FutureSim Labs, the SMT found out that Skye’s group managed to see beyond the edge of the sky into a section they called “Meta Realm” for a brief time. They recorded everything they saw. From those records, scientists are convinced that they might have discovered the rules governing the universe.

The head scientist of the lab, George L’Ernitage, showed the SMT a page that has “<И ц=”СурфацеПорталДефинитион” и=”сниппет” м=”сниппетс” н=”сурфацеПорталДефинитион_Бар” с=”155512″>” written on it. “We’re trying to decipher these codes since then,” he says. “The scientific community borrowed the term, ‘Plumbobs,’ to call these universal principles.”

No matter what you believe, let us all sit for a second and be thankful for whoever or whatever made us exist. And hopefully the “Wipe-out of Era Four” will not come anytime soon.