Sam Breach is the lead artist overseeing Sim creation for worlds. Sam, can you tell us about the Sims in Lunar Lakes, and share with us some of your favorite families?

Once we knew our world would have a futuristic theme, my first idea was to include some clones! It was fun to reincarnate the Landgraabs for this clone family and create Sims who look very closely related, but also retain a touch of individuality at the same time. 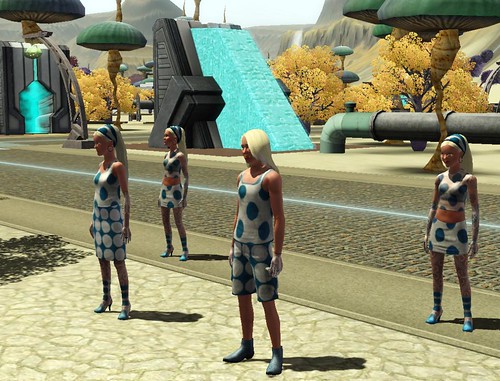 Landgraab was not the only family from previous neighborhoods on our minds. We wanted to honor the fact that many of the fearless space adventurers in Lunar Lakes are the brave descendants of Sims who our players already know and admire. The artists on The Sims 3 world-building team love no family more than the Bayless family from Twinbrook. We were overjoyed to be granted our wish of including a Bayless relative in this world. His name is Stefen and he lives with his sweet-natured, flame-haired girlfriend, Anais. Because they live off the grid a little, I imagined her wardrobe as having been created from a natural patchwork of fibers and found materials that contribute to her slightly haphazard, distressed style of clothing. 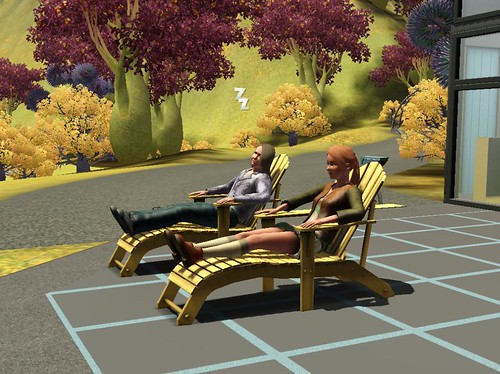 If you look in the crater-top lakes (which is where a creative type like myself would most certainly live if I were a Sim!) you’ll see that the families who live there are closely connected to their natural surroundings. Having a ‘go green’ personality on this planet doesn’t mean everything is green, like it does back in Sunset Valley. To the contrary, the palette of Lunar Lakes’ unusual fauna displays rich purples and reds with vivid oranges and dusky blues, and you’ll see all of these colors reflected in the visual style of most of the bohemian Sims who chose a life away from the main settlement on the spacecraft plain.

In particular, I love the ‘juxtaposition between land and sky’ theme you see running through the Sekemoto family. Gretel’s style reflects her love of geology, with some of her clothing resembling rock formations, whilst her husband aspires to more dizzying heights with his penchant for decorative star fields. As a consequence, their confused toddler son, Kristofer, doesn’t know if he should remain grounded or have his head in the clouds! And it’s not just the Sims themselves – their whole home represents the constant pull between earth and sky. 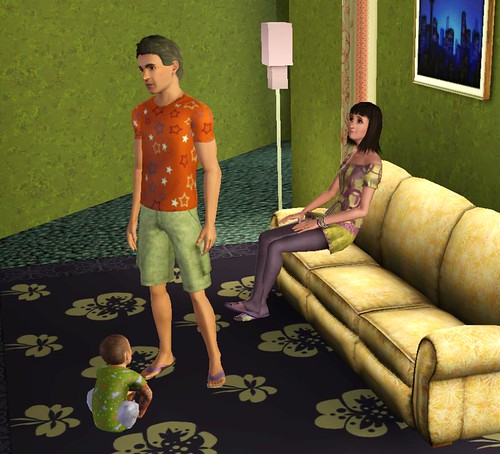 On the spacecraft plain, the proletariat population has a far less vibrant outlook. Although they don’t go so far as wearing uniforms, you might notice that most people are plainly dressed in neutral shades with just the odd splash of color here and there. Of these Sims, I am most intrigued by Gloria Goode, whose father died in a tragic accident. Gloria’s poor father can be found haunting the graveyard. If you bring him back to life to have him join your family, the first thing you will notice will be his unhealthy, unearthly green pallor. He looks as though he might have been laying underground for quite some time!

We have a lot of fun creating unique ghosts for the worlds we make. For Lunar Lakes we mirrored their appearance towards the swampy lunar landscape, incorporating yellow-greens and oranges. In technical terms, creating this kind of look is simple, but requires following the same set of rules for all ghost Sims. We pull down the eyebrows, eyes, cheeks and corners of the mouths to make the Sims look sad. We make the skin green, but keep it really subtle – we want the Sims to look like they are starting to decompose, but we don’t want them to look like an alien! We use makeup creatively to emphasize a deathly pallor and we carefully match the hue of the skin with colors in the clothing to minimize the contrast and help pull all of the elements together to give an overall impression of decay. If you’ve never brought a ghost back to life before, now is the time to do so – you never know what unusual looking Sims you might find!